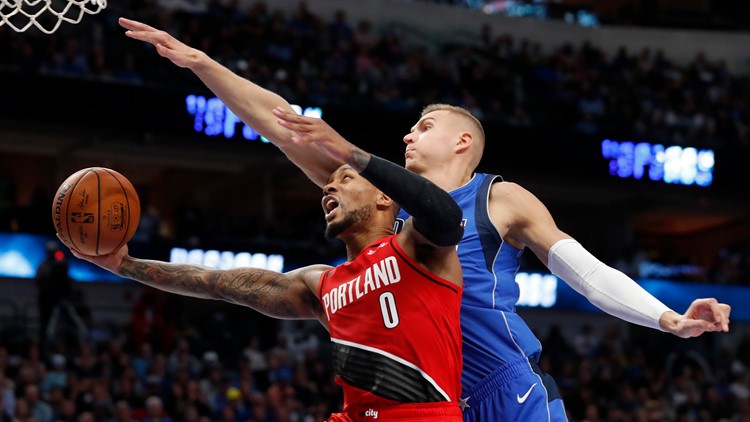 Photo by: Tony Gutierrez
Portland Trail Blazers guard Damian Lillard (0) gets past Dallas Mavericks center Kristaps Porzingis (6) to sink a shot in the second half of an NBA basketball game in Dallas, Sunday, Oct. 27, 2019.

Lillard, McCollum lead Blazers back from 19 down to beat Mavericks 121-119

DALLAS — Damian Lillard helped the Portland Trail Blazers a few ways on Sunday night. He scored the eventual winning basket and talked his coach into making a replay challenge, all in the closing seconds.

Lillard's twisting layup with 26 seconds remaining proved to be the winner as the Trail Blazers beat the Dallas Mavericks 121-119.

Lillard scored 26 of his 28 points in the second half, including a basket that gave the Blazers a 120-119 lead.

The Blazers' CJ McCollum had a game-high 35 points.

After Lillard's score, the Mavericks' Luka Doncic missed a 3-point attempt and Portland won a challenge of a call that would have sent the Mavericks' Dorian Finney-Smith to the foul line after he'd grabbed a rebound and attempted a shot with eight seconds left.

The foul was called on Lillard.

Instead, there was a jump ball.

"Once Portland challenged the play and we were able to go and look at replay, we were able to have clear, conclusive evidence that Damian Lillard legally deflected the ball from Dorian Finney-Smith. The ball was loose when the whistle blew, which led to an inadvertent whistle. Therefore, we ended up having a jump ball," Kirkland said.

Lillard had insisted to coach Terry Stotts that he should challenge the call, even though losing it would have cost the Blazers' last timeout.

"If we lose the challenge, they are on the (foul) line and we are down one (point), but (Lillard) was pretty adamant, so I trusted him," Stotts said.

Dallas still seemed likely to win the jump with 7-foot-3 center Kristaps Porzingis. Portland center Hassan Whiteside had fouled out and 7-footer Zach Collins left the game with an injury.

"I was thinking we don't even have a five man in the game, so how are we going to win a jump ball?" McCollum said. "Then Porzingis tipped it to us, so it worked out."

The Blazers' Kent Bazemore got the ball and was fouled. He made the first of two free throws. Doncic rebounded and passed to Tim Hardaway, whose shot from about midcourt rattled off the front of the rim as time expired.

Lillard, who scored 67 points in Portland's first two games, had only two points in the first half on 1-for-7 shooting.

Porzingis said the Mavericks discussed at halftime trying to keep Lillard in check.

"We knew we couldn't let him get going. Then in the second half, Damian really got going," he said.

For Portland, Rodney Hood had 20 points, Bazemore 11 and Zach Collins 10.

Collins left the court holding his left shoulder in the third quarter. He dislocated his shoulder and will have an MRI on Monday. He won't play Monday against the Spurs.

Portland never held the lead through the first three periods but rallied to tie the game at 95 on one of two free throws by Lillard eight seconds before the end of the third quarter.

Dallas struggled through a 2-for-19 shooting spell and fell behind by as many as six points before Curry hit a 3-pointer that tied the game at 107.

Kleber, who had totaled only eight points in the Mavericks' first two games, scored eight in the first 2:49 with two 3-pointers and a dunk.

"I'm a fan of the nba challenge rule, but if a play is overturned and they don't show the replay that justifies overturning a call along with an explanation then it's going to have real problems. From the angles we saw in arena it looked like a clean strip but body contact first."

Dallas' Kristaps Porzingis' 32 points marked the 15th time he has scored 30 or more, and the first since December 2017.