At media day, Neil Olshey called Anfernee Simons "the best young guard in the league" and "as gifted a player as anyone I've drafted in my 15 years in the league." 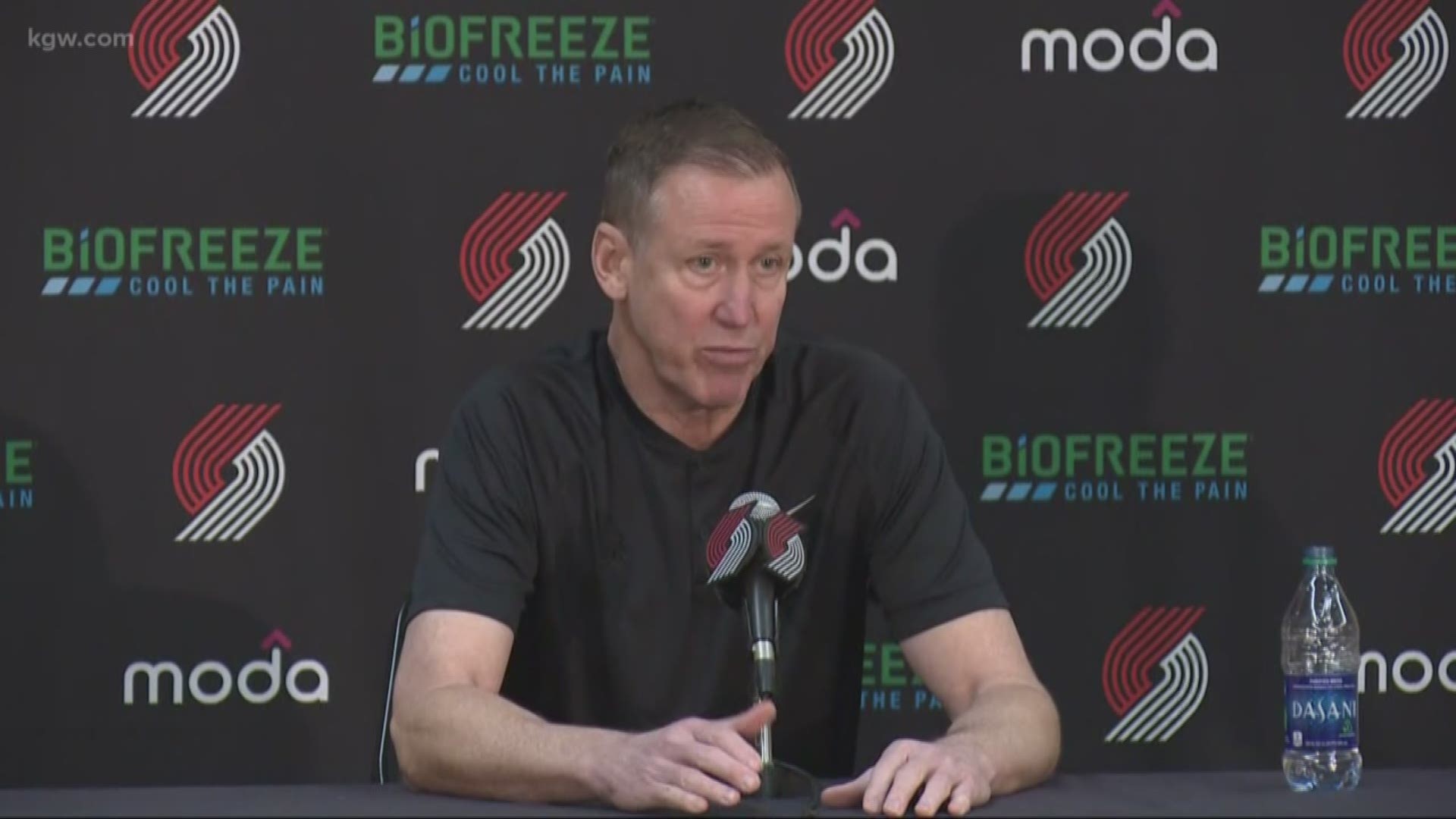 Editor's note: The video above is from the Blazers' 2019 media day.

PORTLAND, Ore. — Media day has come and gone and the Portland Trail Blazers are practicing in preparation for the start of the 2019-20 season.

The first preseason game is five days away and the Blazers tip off their regular-season schedule against the Denver Nuggets in just 20 days.

On the season 3 premiere of the 3-on-3 Blazers podcast, we discuss the growing hype around 20-year-old second-year guard Anfernee Simons, how much Blazers fans should expect from Simons and 21-year-old starting power forward Zach Collins, and debate whether this team will be better than last season's Western Conference finals squad.

1. At media day, Neil Olshey called Anfernee Simons "the best young guard in the NBA" and "as gifted a player as anyone I've drafted in my 15 years in the league." Is the Anfernee Simons hype train going too fast, too slow or at just the right speed?

Orlando: I’m afraid the hype train is going so fast, it can’t be stopped. This is months in the making. Once Lillard signed off on him it was full steam ahead. Anfernee Simons has the tools to back it up and we saw glimpses of what he can be, but fans want to see it right now and I think it's going to take some time. Let's remember, he just turned 20 years old this year and he's literally still growing (he said he grew an inch taller this offseason). He's going to get a taste of real playing time this season and there's going to be some bumps along the way, being asked to play and defend two positions. He's going to be good sooner rather than later, but give the man some time before putting all that pressure on him.

Nate: I want to say too slow, because I believe Simons will end up being an All-Star guard. But I don’t expect that to be in the next two seasons, so I’ll go with just the right speed. In the small sample size we’ve seen, it’s obvious he has a feel for scoring. He can get to spots and create his own shot. It's very natural and it's a skill set that’s hard to teach. And it's not just Olshey talking up Simons. It's Lillard, McCollum, pretty much everyone in the Blazers organization. That gives me confidence that he's the real deal. But fans shouldn't expect 15-17 points per game this season off the bench. Fans can't let the hype train take their expectations to an unreasonable level. There's development and there will be growing pains. But he could be Portland's best offensive player off the bench. At age 20, that's something to be excited about now and for what's to come.

Jared: As much fun as it would be to throw caution to the wind and jump to the front of the Anfernee Simons hype train, I'm going to hit the brakes a little bit. I do think Simons will be good this season. I think he has the potential to average double digits off the bench. But, when Olshey says he's the "best young guard in the NBA" and as "gifted" a player as he's ever drafted, that's setting the bar so high it seems almost unfair to Simons and Blazers fans. I don't know what Olshey's parameters are for "young guard," but let's just say 23 or younger to narrow it down. If he's the best of them all, as Olshey said, that puts him above players like Luka Doncic (20), Ben Simmons (23), Donovan Mitchell (23), Devin Booker (22), DeAaron Fox (21), Trae Young (21), Jamal Murray (22) and D'Angelo Russell (23). As for Olshey's claim that he's as gifted a player as he's ever drafted (a claim he's now made twice), that puts him at or above Damian Lillard, CJ McCollum and Blake Griffin. I'm not ready to put him there yet.

2. Simons and Zach Collins are both expected to see their roles increase this season, with Collins expected to start at power forward and Simons potentially sliding in as the team’s sixth man. Which player will have the biggest impact on the Blazers this season?

Nate: As much as I believe Anfernee Simons will be a plus player for the Blazers off the bench, the answer to this question is still easy for me. It's Collins. The Blazers don't have a lot of frontcourt depth. If he's not ready to provide 25-30 productive minutes consistently, the Blazers will have a huge hole in their rotation — one that could end up limiting the team's success. It appeared Collins had controlled his fouling issues, but they showed their ugly head last postseason. In terms of depth behind him, the Blazers are relying on Anthony Tolliver and Pau Gasol until Jusuf Nurkic returns from injury. On the other hand, if Collins is ready to go, his upside is higher than Al-Farouq Aminu, who has filled that role for the past couple of seasons. For better or worse, Collins will have a bigger impact.

Jared: Nate said "for better or worse," Collins will have a bigger impact. I'm going to agree that Collins will have a larger impact than Simons, and I think it will be "for better." When Collins was first drafted by the Blazers, Olshey called him a "franchise-level building block." He's compared him to Rasheed Wallace. The reason a player who has averaged 5.6 points and 3.8 rebounds in his first two seasons is looked at as such a valuable player by the Blazers is because he can shrink the court with his defense and stretch the court with his offense. Last season, ESPN's Zach Lowe said Collins "has the blurry outlines of a modern big who can protect the rim, shoot 3s, post up guards on switches, and do just enough off the dribble to hurt you." Those kind of players are rare, even in the modern NBA. Even if nothing else changed from last season than more minutes — no change in role or usage rate — Collins' stats extrapolated across minutes vaults him into rare company. If Collins plays 28 minutes per game, his stats would be 10.5 points, 6.7 rebounds, 1.4 blocks and 0.8 3-pointers per game. Those stats may seem mediocre, but last season, only SIX players in the NBA matched them: Giannis Antetokounmpo, Karl-Anthony Towns, Anthony Davis, Joel Embiid, Al Horford, Myles Turner and DeMarcus Cousins. Let's say Collins somehow learns to avoid foul trouble (a BIG if) and averages 32 minutes per game next season. His extrapolated stats would be 11.9 points, 7.6 rebounds, 1.6 blocks and 0.9 3-pointers per game. The only players to match those stats last season were Towns, Davis and Embiid. Obviously this isn't a perfect comparison because those players are elite offensive players who score at a volume far higher than Collins will. But this exercise explains Collins' potential value, and justifies why the Blazers let Al-Farouq Aminu walk to open up a much larger role for Collins going forward.

Orlando: This is a good question. You can easily make the case for both, but I’m rolling with the big fella on this one, simply because he’s going to be starting. He'll have more chances to impact games. This is the next step for Collins as a pro. Like we've said multiple times on the podcast, if he can stay out of foul trouble, he's going to make a difference. He's a shot blocker who can be a safety net on defense and a big man who could stretch the floor if the shot is falling. Hassan Whiteside said a couple of times this offseason how Collins has stood out to him. That's a positive sign for the Blazers front court. Collins will get his opportunities this season and could be a key piece to making another run.

3. At media day, Olshey said this is the "best team we've had." Terry Stotts said it's "the deepest team we've had" and said he thinks the Blazers can have a better year than last season. Do you agree with them?

Jared: I don't agree with the unequivocal statement that this is the best Blazers team Olshey has had, or that it's the deepest team, as Stotts claimed. That would put this team above last season's Western Conference finals team and above the 2014-15 team, which in my mind is still the most talented and deepest team the Blazers have had since Olshey arrived in 2012. I do agree with Stotts that the Blazers "can have a better year than last season," because if everything goes right with this team, I think it's a championship-level team. If everyone stays healthy, and if most of the players perform at peak level, this team's talent is undeniable. But there are a lot of new pieces, there is potential for volatility, and I still don't know if this team will be good enough defensively to reach the conference finals for the second season in a row. There are enough question marks with this team to make me pause, though I do think they have the potential to be the best Blazers team of the past decade.

Orlando: Depth was definitely a theme at media day. Damian Lillard discussed how this roster was not only deep but had more experience than Blazers teams of the past. Tough to disagree if he's saying it, Stotts is saying it and Olshey is saying it. Depth doesn't necessarily translate to a deeper run in the postseason or more wins. This team is coming off its best season in nearly two decades, but seven players from that roster are gone and team chemistry was arguably their biggest strength. While depth is huge, bringing in vets and guys with experience to cultivate that same type of energy could pay dividends down the stretch. Tolliver, Bazemore and Gasol will have key roles in that department. The Blazers can have a better season, but a lot of things are going to have to fall in place at the right time, the way it did last year.

Nate: I believe that this year's team could end up being the deepest and best they've had. But I'm not ready to say right now that they are. There are a lot more question marks with this group than there was the group they finished the season with. Kanter, Aminu, Harkless, McCollum, Lillard in the starting lineup, and Hood, Curry, Collins, Turner on the bench was a deep group. They had their limits, but you knew what you were going to get from most of those guys night in and night out. I'm not sure you have that yet with the Blazers' current roster. I'm not sure what to expect from Collins and I'm unsure about the depth in the frontcourt. And while I believe Simons is ready to play, we haven't seen him play against top competition for an extended period. The current Blazers' roster certainly has a higher ceiling than last year's team. But right now, I'm not sure their foundation is at the same level as what Portland finished with last season.