MLB trade deadline: Max Scherzer, Trevor Story, other big names who could be traded this week

The MLB trade deadline is coming up on Friday and plenty of big deals are expected. Get our take on who's being dealt and which players are likely staying put. 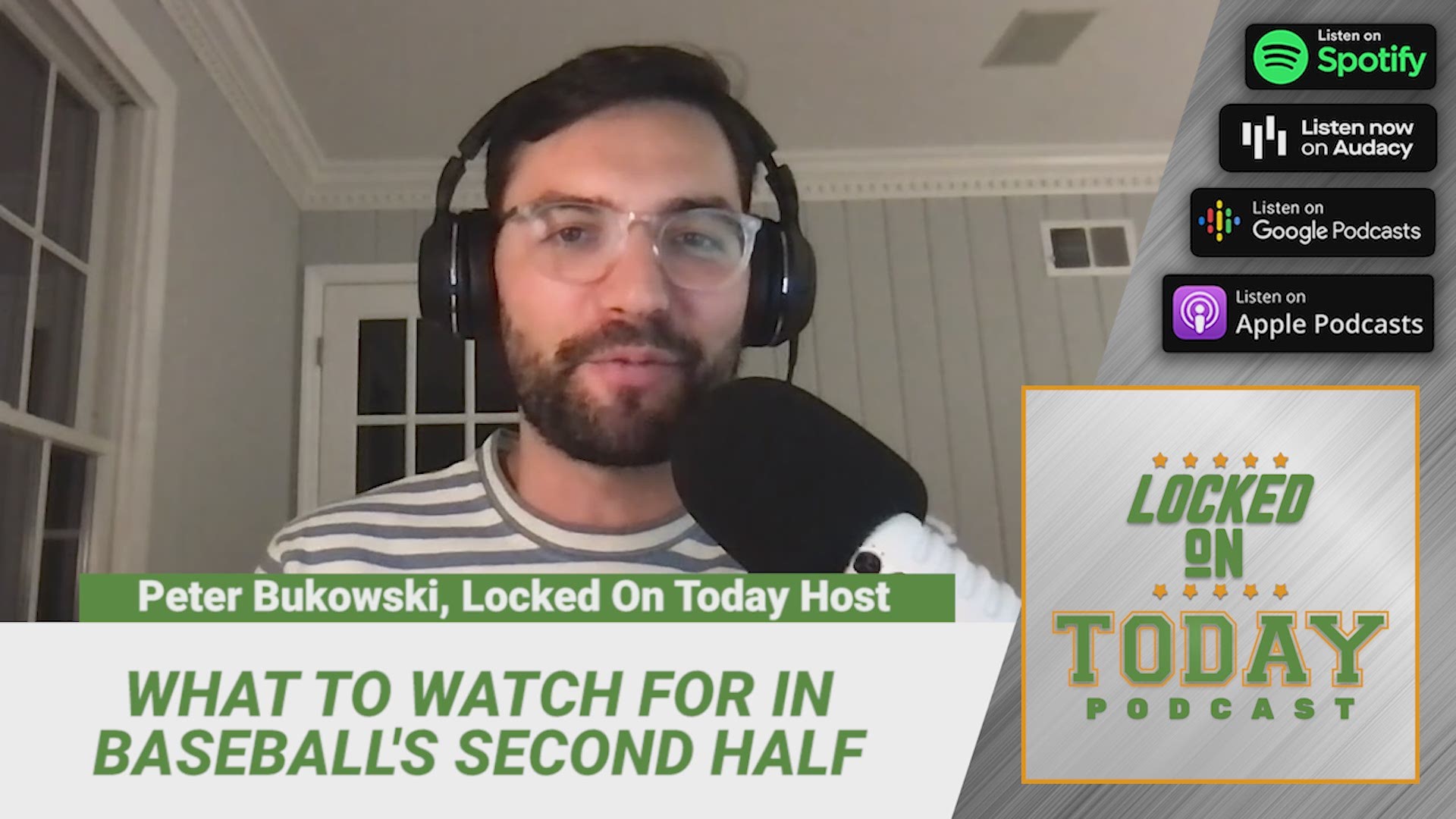 But, many more trades are expected throughout the week by the end of Friday's 4 p.m. EST trade deadline.

Locked On MLB's live trade deadline show on Friday 3-5 p.m. EST will track all the biggest trades before the deadline expires. Stream live on YouTube, Twitch, Periscope, Facebook and Audacy.

Below are big name players rumored to be possibly on the move at the trade deadline. Our local MLB team podcast hosts offer whether or not they foresee a trade happening.

All year Joey Gallo has been discussed as a huge potential trade piece at the MLB trade deadline, but it seems totally up in the air whether the Rangers would be willing to part ways with the All-Star outfielder.

Gallo, who can also play at the corners in the infield, not only provides a giant bat but also defense, with an incredible outfield arm. The 27-year-old was selected to his second All-Star Game this year and participated in the Home Run Derby.

He's batting just .222 this season but has 24 homers and 52 RBIs. His 1-year deal expires, but Texas could be aggressive in a contract extension to invest in him as the future of the Rangers. Or, they could secure a big haul for him.

Brice Paterik, Locked On Rangers podcast: "If Joey Gallo is going to be traded it’s going to take a huge prospect haul. Unless the Rangers get totally blown away with a package I don’t think they will or should trade him."

Other Reds players who could be moved: Kyle Gibson and Ian Kennedy are near certainties to be moved at the deadline.

Nick Castellanos signed a 4-year, $64 million deal with the Reds that won't expire until after the 2024 season, but the All-Star has an opt-out opportunity at the end of this season and with his high-production, he could find even more money elsewhere.

Castellanos is tied for second in the major leagues with a .329 batting average and 29 doubles. He also leads the Reds with 59 RBIs and 111 hits and has 18 home runs, tied for second on the team. He was placed on the 10-day injured list this past weekend with a wrist injury, which could fumble away trade talks.

Would the Reds deal him? They could probably secure a big haul, but it would likely only happen if they were sure he was going to opt-out.

Jeff Carr, Locked On Reds podcast: "Nick Castellanos’ opt-out after this season looms large over what the Reds should do. He is the team MVP, undoubtedly, but to play .500 baseball and miss the playoffs and then lose Castellanos to free agency for almost nothing would be a hit punch. The Reds may need to be prudent with their decision-making because it’s doubtful they will get any guarantees as to if he will, or will not, opt out before the deadline."

Other Reds players who could be moved: Tucker Barnhart, Wade Miley, Sonny Gray.

Escobar, 32, was selected to his first All-Star Game this season and has been rumored for a while to a be a potential trade candidate at the deadline. The last place Dbacks will likely look to move the switch-hitting infielder, who's on an expiring deal.

He could play third base or second base for a team looking for short term infield help down the stretch.

Millard Thomas, Locked On Diamondbacks podcast: "He should be moved because Escobar is going to be a free agent after the season, and he’s a middle of the order slugger with defensive versatility which is what every contender wants."

Possible destinations for Escobar: White Sox or any team that could use an infielder and power hitting slugger.

Starling Marte is a center fielder with a good bat that could provide a big boost to a contender down the stretch.

Aram Leighton, Locked On Marlins podcast: "Unfortunately for the Marlins, Marte needs to be dealt. The team couldn't agree to an extension with Marte, and he is set to become a free agent after this season. At this point you take what you can get prospect wise, even if it will be a bit light relative to Marte's talent."

Other Marlins who could be dealt at the deadline: Jesus Aguilar, Yimi Garcia, Garrett Cooper, Richard Bleier, Adam Duvall

Trevor Story has been widely regarded as one of the hottest trade deadline targets for much of the year. The 28-year-old is set to become a free agent at the end of the year and it's likely time for the last place Rockies to deal him.

Paul Holden, Locked On Rockies podcast: "It’s hard to know exactly what the Rockies want. While a deadline deal for Trevor Story is still possible, the Rockies want a lot for him, making it tough for teams to rationalize a two-month rental."

"However, he’s a superstar, and will make teams that have come out hot or faced new injuries in the second half. He’s a fan favorite, the team plays well at home and the can get a draft pick back if he signs in after the qualifying offer. Owner Dick Monfort loves that he puts fans in the seats, and interim GM Bill Schmidt loves to draft. If the Yankees or Mets are serious, he’s dealt, but I can’t shake the feeling he stays in Colorado."

Credit: AP
Seattle Mariners pitcher Kendall Graveman gives a thumbs up toward home plate after the final pitch in the 2-1 win over the Colorado Rockies during a baseball game, Tuesday, June 22, 2021, in Seattle. (AP Photo/John Froschauer)

Graveman signed a one-year deal with Seattle prior to this season and the 30-year-old is set to be a free agent at the end of the season. With his strong performance this season, the relief pitcher could net a healthy return for the Mariners.

He's got a stellar 0.84 ERA and 10 saves for Seattle with 32 strikeouts in 32 innings pitched. But, would Seattle move him now that they are just 1.5 games back of an AL Wild Card spot?

D.C. Lundberg, Locked On Mariners podcast: "I don't think they'll trade Graveman, but I wouldn't be entirely surprised. Mr. Graveman is the anchor of the bullpen, he's a veteran presence on that mostly young pitching staff, and I'm not sure the M's want to disrupt that. However, Jerry Dipoto is often full of surprises, so who knows. But my guess would be that he stays put."

Other Mariners who could be dealt: "I've also seen Mitch Haniger's name mentioned, but I also don't think he's going anywhere. He is also a veteran presence, which the young Mariners need and value. Kyle Seager is another veteran presence, but I'd be shocked if he were back next year, where Mitch Haniger – or "Maniger," as I like to call him – could still contribute."

Boyd, 30, hasn't pitched since mid-June due to a triceps injury, but is expected to return possibly in early to mid-August. Boyd has a 3.44 ERA in 13 starts this season with 56 strikeouts in 70 innings.

Scott Bentley, Locked On Tigers podcast: "I’m not confident at all that he will be traded, but he absolutely should be. He should’ve been moved in 2019 and wasn’t. He still has 1.5 years of team control. Let's see if we make the same mistake twice."

Possible destinations for Boyd: "Really broad to be honest. A left-handed starting pitcher is something pretty much any and every contender would be interested in adding."

Other Detroit Tigers players who could be on the move: Jonathan Schoop, Robbie Grossman.

Max Scherzer is on an expiring deal and the Nationals are in fourth place in the AL East and eight games back of first, so if there was ever a time to deal the 3x Cy Young winner, now would be the time.

Scherzer, 36, was an All-Star again this year with a 2.83 ERA and 142 strikeouts in 18 starts. He was scratched from his start on Saturday following reports that he will likely be dealt at the break.

Locked On Nationals podcast host Josh Neighbors said this could become a fire sale situation for the Nats after they were swept by the Baltimore Orioles this weekend.

This one was the nail in the coffin of the #Nationals season. Lets see how much of a fire sale this becomes https://t.co/vE6CumdheS

Berrios, 27, has had a really strong season for a struggling Twins team this season and his name has been floated as a potential target for teams at the deadline.

The 2-time All-Star has a 3.48 ERA and 126 strikeouts in 20 starts this season. Will the Twins try to extend him long-term or will they get a good haul for him at the deadline?

Nash Walker, Locked On Twins podcast: "José Berríos would undoubtedly bring back a haul in a deadline deal. However, the Twins have publicly stated they believe they can compete in 2022, and Berríos is under contract next season. If they want to win next year, trading Berríos makes little sense. For that reason, I believe he’ll stay."