Portland lived up to its nickname of Soccer City USA as locals headed out to bars, restaurants, and friends' couches to watch the Women’s World Cup final. 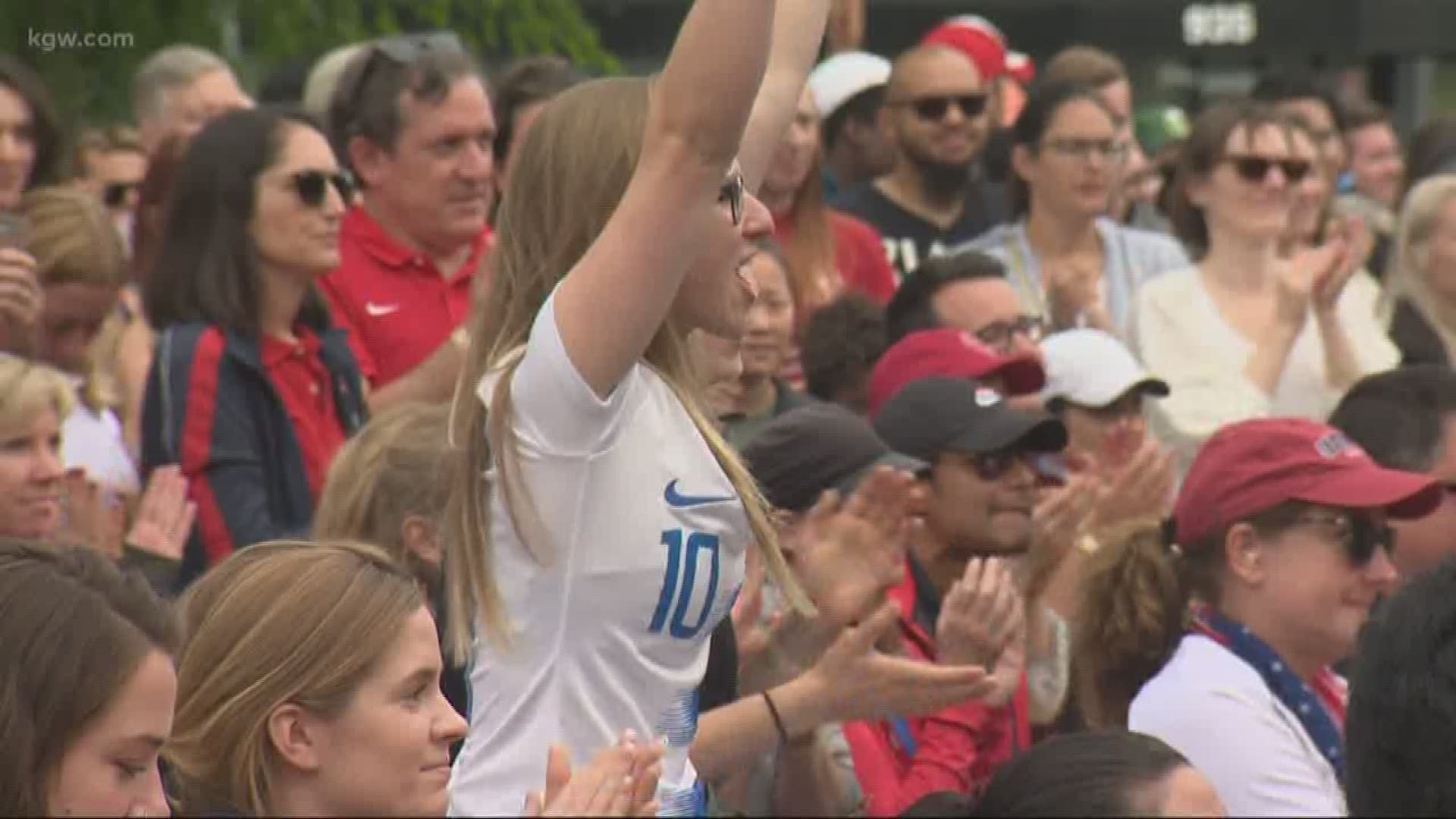 PORTLAND, Ore. — The world was watching as the U.S. women’s national soccer team clinched a record fourth World Cup title — and second in a row — on Sunday.

The game aired at 8 a.m. on the West Coast, but an early start did not deter fans from watching the match live.  Portland lived up to its nickname of Soccer City USA as locals headed out to bars, restaurants, and friends' couches to watch the Women’s World Cup final.

The Toffee Club in Southeast Portland was one of those hot spots. The British pub threw a block party, which started at 6 a.m.

"I was here at 5 a.m. standing in line," soccer fan Kerri Dicky said.

It was packed with so many fans dressed in red, white and blue that it looked like a repeat of the Fourth of July.

Leah Koshiyama, Clay Walsh, and Lisa Congdon said they arrived by 5:45 a.m. but still found themselves waiting behind about 100 people in line.

"There was a line all the way around the block," Koshiyama said.

The group was one of the lucky ones to find a spot to sit while watching the game.

While spirits were high, the atmosphere was a bit tense going into halftime at 0-0.

"You never want to go into the second half zero to zero, but I’m holding out hope that we can pull this off," Congdon said.

Much to the cheers of USA fans, they did. Team USA beat the Netherlands 2-0, solidifying their fourth World Cup title.

"It's such a great feeling to be winners. We won! That’s four stars. It’s incredible," fan Brandon Zabinski said.

Zabinski and his wife Lauren were at Toffee cheering the entire time, but like many fans, they were spreading extra love for local players, like Tobin Heath.

"Oh god, Tobin Heath is just a beast," Lauren Zabinski said. "And the whole crowd was just amazing, but it’s always good to see some hometown talent coming through."

Toffee Club Owner and General Manager Niki Diamond estimates anywhere from 400 to 500 people came through her pub, the attached brewery, and outdoor block party for the World Cup Final.

“Providing the space for that is actually a real honor. It’s quite humbling when we think of how many people have chosen to come to our space," Diamond said. "There’s a ton of spaces in Portland that are showing these games. That people choose to get up at 3 a.m., be here by 4 a.m. to watch it in an environment that we’re creating is incredible and honestly the reason that we do this."

Those fans included American Outlaw members. They’re a nationwide group of soccer fans, like Mark Nicholson and Robert Flores, who came to the pub from Washington just to watch the game with fellow patrons.

"Whether it's women's or men's — doesn’t matter," Flores said.

"The community and everything. It's just what you're here for," Nicholson said.

Not only did fans show up early to snag a spot, but also because this is a team they truly believe in.

"Oh my gosh! Words cannot explain. Like fire," Dicky said. "I’m totally overwhelmed and also so humble, so happy to just see these women go out there and do what they can do every single day."

"It’s a magical event. It's really amazing to have the U.S.'s best soccer players on the field and see them express themselves and be strong, be powerful. Really display their skill. It’s really exciting," fan Curtis Bullock said.

Emma Deppa was there in American flag garb. She plays soccer for the Toffee League in Portland. She hopes seeing female athletes celebrated on an international stage will inspire future soccer stars all over the world.

"People get really excited about a lot of men's sports, but to see this support for US women's soccer is huge. It's huge for me personally and I think it's so huge for the next generation of soccer players growing up," Deppa said. "I could cry, but I’m going to try not to do that on TV."