It’s another of many practices at the Winterhawks training center in Beaverton and 20-year-old Winterhawks forward Alex Schoenborn is enjoying life on ice. 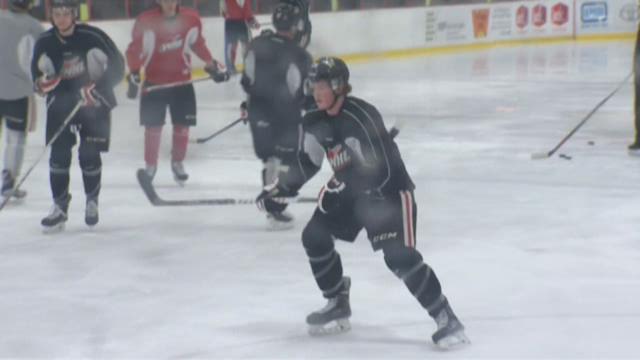 It’s another of many practices at the Winterhawks training center in Beaverton and 20-year-old Winterhawks forward Alex Schoenborn is enjoying life on ice.

“I started at three years old and I’ve always loved hockey,” said Schoenborn. “I’ve always wanted to be an NHL player growing up. I guess, every day we have practice and it never gets old, which is good."

Schoenborn was selected in the third round of the 2014 NHL Entry Draft by the San Jose Sharks. He spent time in the Sharks’ developmental camp last summer.

Alex is from Minot, North Dakota and is in his fourth season with the Winterhawks. The 6-foot-1, 199-pound right wing is on a roll with four goals in Portland’s last three games.

He had a hat trick in a 5-2 win over Seattle, including a rebound goal while lying flat on his stomach for the game-winner. It was one of the best goals of the season for the Winterhawks.

“The one goal I got a little lucky,” Schoenborn said. “The rebound kind of squirted out and I fell on my stomach and took a big swing at it and it ended up going in the net. It felt pretty good, yeah.”

Needless to say, the rest of the Winterhawks were impressed as well.

“The determination that Alex had to put that rebound in was pretty special,” said coach Jamie Kompon. “I think the whole team fed off that. How hard that Alex works, to see him get rewarded like that, he’s one of those players, who’s not going to be on the scoresheet every night, but the little details of his game, they’re starting to come around."

Alex has 18 goals and 19 assists in 44 games, his best season since he came to Portland. He loves the game but enjoys the camaraderie of his teammates as well.

“It’s incredible the friendships you can make on a team,” says Schoenborn. “With guys you don’t know at the start of the year until now. Especially the rookies, it’s a special thing for sure.”

Occupier says 'we're not dead yet'

Watch live or check weather & traffic updates on the go with the KGW News app.