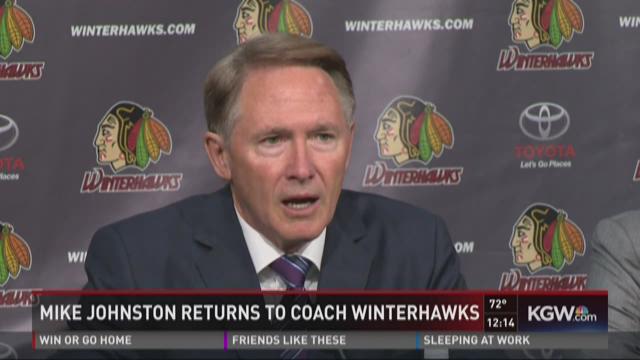 The Portland Winterhawks have announced that Mike Johnston is returning to the organization as the team’s Vice President, General Manager & Head Coach.

Johnston originally joined the Winterhawks in that role in October 2008 and remained through the 2013-14 season, amassing a record of 231-114-10-10. His 231 wins are second in team history, while his winning percentage of. 660 is highest in team history among coaches with at least a full season at the helm. The Winterhawks made four straight trips to the WHL Final from 2011 through 2014, winning the 2013 championship.

“I thoroughly enjoyed my time with the Winterhawks in my initial tenure with the organization, and coming back is a unique opportunity I couldn’t pass up,” said Johnston. “I’m looking forward to the challenge of getting the Winterhawks back to being a championship contending team.”

“Mike’s success first in turning around the Winterhawks, and then keeping them at that level made this an easy decision,” said Portland Winterhawks Owner Bill Gallacher. “Mike’s track record speaks for itself, and I’m thrilled he’s returning to the Winterhawks.”

During Johnston’s first tenure in Portland, 24 Winterhawks players were selected in the NHL Draft, including six players selected in the first round: Ryan Johansen, Nino Niederreiter, Sven Baertschi, Joe Morrow, Derrick Pouliot and Seth Jones. During the 2015-16 NHL season, 25 Winterhawks alumni suited up in the NHL, including 16 who played under Johnston in Portland.

In his first full season with the Hawks in 2009-10, Johnston guided the team to a 48-point improvement from the prior season, a franchise record, and an appearance in the second round of the playoffs. The Winterhawks then cracked the 100-point barrier in 2010-11 with 103 points, a U.S. Division title and then their first of four straight trips to the WHL championship series, against the Kootenay Ice.

After 102 points in 2011-12, they advanced to the WHL championship and the first of their three straight WHL Finals series against the Edmonton Oil Kings. In 2012-13 the Winterhawks had their greatest season in team history, with franchise records of 57 wins and 117 points, and a league record 29 road wins, as they won the third WHL championship in franchise history and advanced to the final of the Memorial Cup.

In 2013-14 the Winterhawks set another franchise record with a 21-game winning streak as they amassed 113 points and their fourth consecutive trip to the championship series.