Friday Night Flights: What to watch for in the 1st round of the high school football playoffs

Here's what you should know heading into the first round of the high school football playoffs. Watch highlights on Friday Night Flights with Orlando Sanchez. 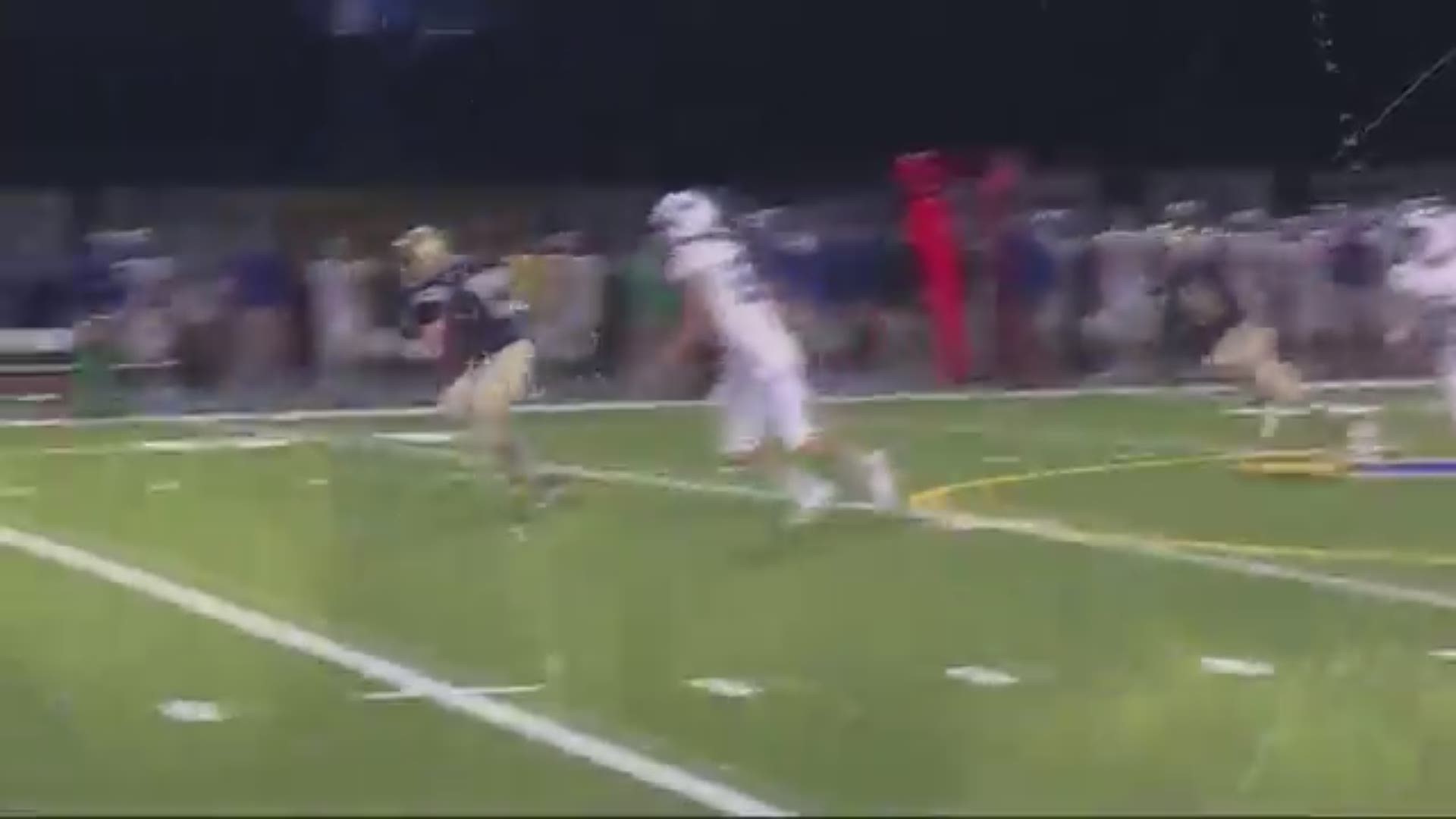 PORTLAND, Ore. — The first round of the high school football playoffs begins on Friday. There's a lot of games and a lot to know going into the postseason.

Here's a preview of the first-round games. We'll have highlights of the first round on Friday Night Flights with Orlando Sanchez. The high school football show airs during KGW News at 11 on Friday night.

Century is in the playoffs for the first time since 2016.  At 2-7, they made the playoffs as an at-large, and got there thanks to strength of schedule.  They played eight teams that are in the playoffs. Tigard is the No. 1 seed for a reason.  After last year's one-point loss to Jesuit in the quarterfinals, the Tigers have been on a mission. They're the only 9-0 team in 6A. That includes seven wins over playoff teams.

Southridge went 2-7 on the year (1-6 vs. playoff teams), finishing sixth in the Metro League. They lost to West Salem in the first round last year. Central Catholic won the Mount Hood Conference, going 7-2 on the year, 4-1 against Oregon playoff teams. They made it to the quarterfinals last year.

Roosevelt is in the playoffs for the second straight year. They struggled earlier in the year, but rebounded on offense later in the season to finish 5-4. West Linn went 6-3, with their losses coming to No. 4 Central Catholic, No. 3 Lake Oswego and No. 1 Tigard. Every team on their schedule made the playoffs this year. They lost to Sheldon in the quarterfinals last year.

Bend finished the year 4-5, 1-4 against playoff teams, to finish third in the Mountain Valley Conference. They lost to Sunset in the first round last year. Aloha finished the year 8-1, 6-1 vs. playoff teams, and claimed a share of the Metro League title. That includes a 42-41 win over No. 2 Jesuit. They were knocked out in the first round last year by Tigard.

Westview started the season hot.  But then they lost 7 straight to close the season. All 7 of those losses were to playoff teams. They did not make the playoffs last year. One could argue that Tualatin is seeded lower than they should be. They went 7-2, 6-2 against playoff teams, to finish second in the loaded Three Rivers League. The Timberwolves fell to Central Catholic in the second round last year.

Despite only a 5-4 record, Sheldon is seeded eighth. They played eight teams that made the postseason among Oregon 6A, 5A & Washington schools. After going 2-7 last year, Jefferson is back in the playoffs thanks to a 6-3 record. They went 2-3 against playoff teams.

Glencoe is back in the playoffs for the first time since 2013. The Crimson Tide went 5-4, and finished third in the Pacific Conference. This is a program that went independent to rebuild after several winless seasons.  They played six playoff teams from 5A & 6A this year. Barlow won the third place game in the Mount Hood Conference. They finished 7-2, with their losses coming to Tigard & Central Catholic. They played five playoff teams, going 3-2 in those games.

For the second straight year, Reynolds makes a trip to Medford for the first round of the playoffs.  They beat South Medford on the road last year. This season, they went 5-4, but only 1-4 against playoff teams. The Black Tornado went 7-2 this year, 5-2 against playoff teams. They've lost in the first round each of the last four years, though this is the best team they've had in several years.

Lakeridge has had a real up and down year, starting with their head coach leaving just before the season began. They went 3-6, with a 2-6 record against teams that made the playoffs. They were knocked out of the playoffs by West Linn in the second round last year.  Beaverton went 7-2 this year, 6-2 against playoff teams. They had a share of the Metro League title. They lost to Barlow in the first round last year.

For the 2nd straight year, McNary started the season 0-5, only to go 4-0 in league play and claim the Mountain Valley Conference title. They played seven playoff teams, going 2-5. Sherwood went 7-2 on the year (4-2 against playoff teams) to win the Pacific Conference. They fell to Sheldon in the second round last year.

Liberty went 6-3 overall, 3-3 against playoff teams. They're in as an at-large bid. They lost to Clackamas in the quarterfinals last year. Grant is your PIL champion. The Generals went 7-2 in the regular season, 3-2 against teams in the playoffs. They've lost in the early rounds each of the last three years.

These teams should both probably be ranked higher than 16 and 17. Clackamas, the 2017 champs, went 4-4 this year, with a win over No. 11 Beaverton. Three of their losses coming to Top 5 teams in Oregon and Washington. They lost the Mount Hood Conference Championship game to No. 4 Central Catholic last week. The Cavaliers made it to the semifinals last year, losing to Sheldon. Mountainside is in the playoffs for the first time ever. The Mavericks went 6-3 thanks to a stifling defense. Only Newberg gave up fewer points this year.  Mountainside played seven playoff teams, going 4-3, with their losses coming to Jesuit, Beaverton, and Aloha.

Thurston finished undefeated and will be heavy favorites against Corvallis, who finished the season 4-5.

After dropping their opener to No. 2 Crater, Wilsonville rattled off seven straight wins before losing to No. 7 Parkrose in the district's first place game. The Wildcats have made it to the final four each of the last four years.

For the third time this year, and for the second straight week, the Indians have to make the 4-plus-hour trek to play in Pendleton. The Buckaroos have won the two previous meetings.

The Falcons beat Forest Grove last week to clinch their playoff spot.  Silverton went 8-1, their only loss to No. 3 West Albany.

Speaking of West Albany, the Bulldogs finished the season undefeated, a feat only shared with No. 1 Thurston.

After two straight 2-7 seasons, the Dallas Dragons went 6-3 this year. They'll face a tough Ashland team who went 8-1 this season.

Parkrose is in the playoffs for the second straight year under head coach Keanon Lowe, and coming off of a trio of big wins, including at No. 5 Pendleton and at No. 8 Wilsonville.

The Spartans finished the season 6-3, but will have to pull off a big upset against 8-1 Crater if they hope to keep their season alive.

The winners of these games advance to the state playoff field of 16, which will be seeded by a selection committee sometime this weekend.

The Olympia Bears finished 4-5 on the year, and finished tied for 5th in the South Puget Sound League. Camas finished the season undefeated and is ranked No. 3 in the 4A (Washington's highest classification) state rankings.

The Visiting Eagles went 7-1, finishing first in the North Puget Sound League's Valley Division. Skyview, who is ranked ninth in the state, went 7-2 with losses to No. 3 Camas and Mt. Si.

The hometown Rams won the North Puget Sound League's Sound division, and finished 7-1 on the season. The Union Titans are the defending state champions. They went 5-4 this and finished third behind Camas and Skyview in the 4A Greater St. Helens League standings.

The winners of these games advance to the state playoff field of 16, which will be seeded by a selection committee sometime this weekend.

The visiting Sentinels finished fourth in the Pierce County League with a 4-5 record. Kelso placed second in the 3A Greater St. Helens League and had a 7-2 record.

The Capital Cougars finished sixth in the South Sound Conference with a 3-6 record. Prairie won the 3A Greater St. Helens League and had an 8-1 record.

The Plainsmen, who went 5-4 this season, return to the playoffs with a trip north to Seattle. The hometown Bulldogs finished 4-4, good for third place in the Seattle area Metro League.

To view all the brackets in Oregon, visit the OSAA website. The Washington brackets will posted after this week's games.