Oregon wrapped up the regular season with a perfect record at home for the eighth time. Oregon State was denied a bid for bowl eligibility. 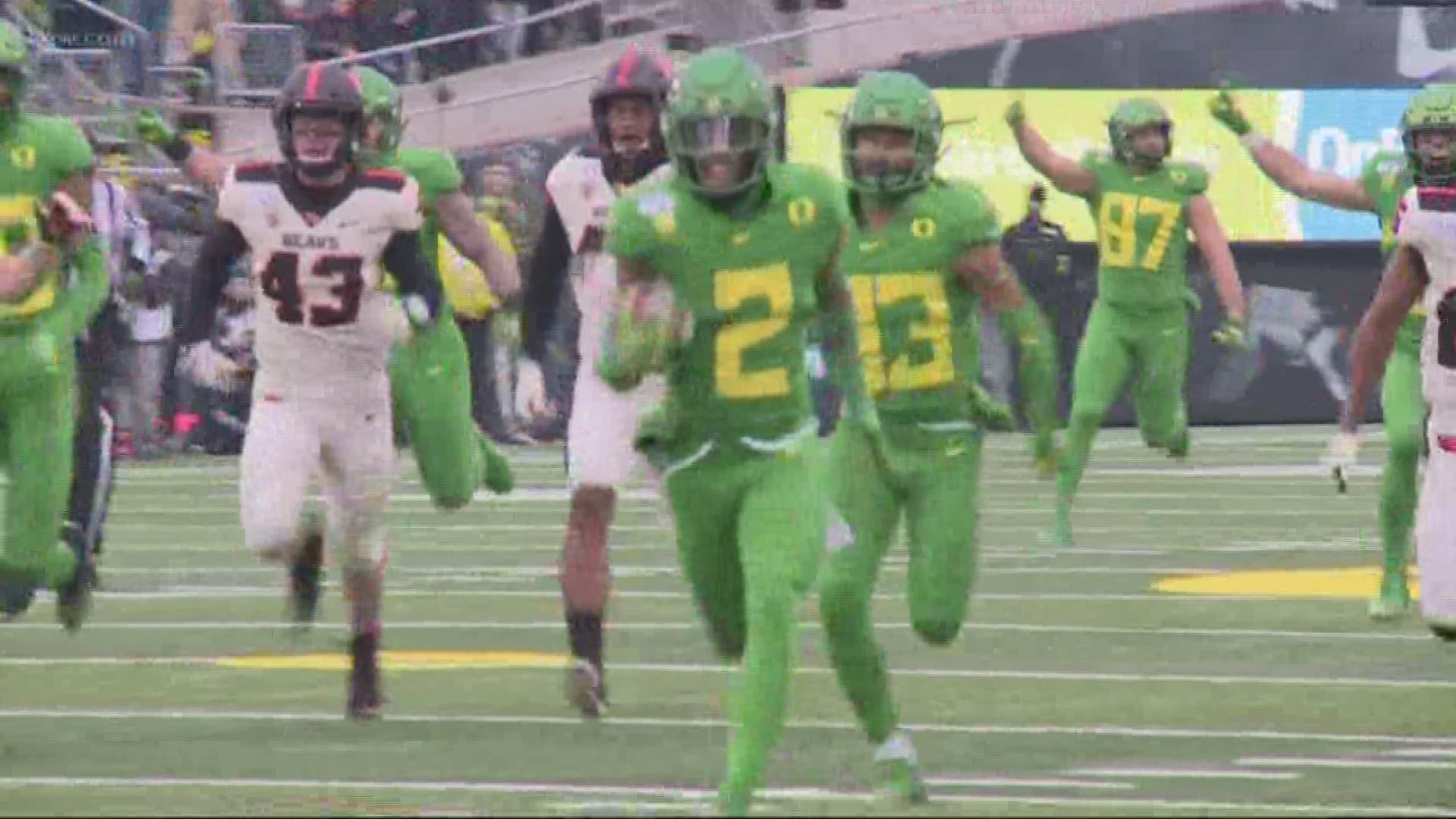 EUGENE, Ore. — Justin Herbert threw for 174 yards and a touchdown in his final game at Autzen Stadium and No. 14 Oregon held off Oregon State 24-10 on Saturday in the 123rd Civil War rivalry game.

Oregon (10-2, 8-1 Pac-12) wrapped up the regular season with a perfect record at home for the eighth time. The Ducks reached 10 wins overall for the first time since 2014.

Oregon State (5-7, 4-5) was denied a bid for bowl eligibility in coach Jonathan Smith’s second year. The Beavers haven’t made a postseason appearance since 2013.

Trailing 17-3 at the start of the fourth quarter, Oregon State closed the gap on Jermar Jefferson’s 19-yard touchdown run with 11:03 left.

Herbert appeared to hit Jaylon Redd with an 8-yard touchdown pass but a review determined Redd fumbled before scoring, giving the ball to the Beavers. Oregon State’s drive fizzled on a fourth-and-5 attempt, turning the ball over on downs to set up Cyrus Habibi-Likio’s 20-yard touchdown run with 1:15 left.

Oregon was cruising toward a possible bid in the College Football Playoff last weekend when it was upended 31-28 at Arizona State. The loss dropped the Ducks from No. 6 in the rankings.

Oregon was already assured of a spot in the Pac-12 championship game Friday in Santa Clara, California. The Ducks don’t yet know their opponent: The Pac-12 South will be determined by No. 6 Utah’s game against Colorado.

Oregon State has already collected more wins this season than in the previous two years combined. Picked in the preseason to finish last in the Pac-12 North, the Beavers surpassed expectations but couldn’t quite get to a bowl with losses in their final two games.

Herbert was a freshman when the Beavers last beat the Ducks. He has 94 career passing touchdowns, most among active players nationwide, and second only to Marcus Mariota on Oregon’s career list.

In a surprising move, Oregon State started sophomore quarterback Tristan Gebbia in place of sixth-year quarterback Jake Luton, who reportedly had an arm injury although nothing was formally announced by the team.

Gebbia, a Nebraska transfer who competed with Luton in fall camp for the starting nod this season, had thrown for 104 yards with two touchdowns and an interception this season, before his first career start.

Luton struggled with injuries throughout his Oregon State career, earning the sixth year of eligibility. He threw for 2,714 yards and 28 touchdowns in his final year, with just three interceptions.

But Mykael Wright returned the kickoff 98 yards for a touchdown to put the Ducks up 10-3. It was Wright’s second kickoff return for a TD this season and the longest in the history of the Civil War.

READ: Much has changed for the Beavers and the Ducks over 4 years