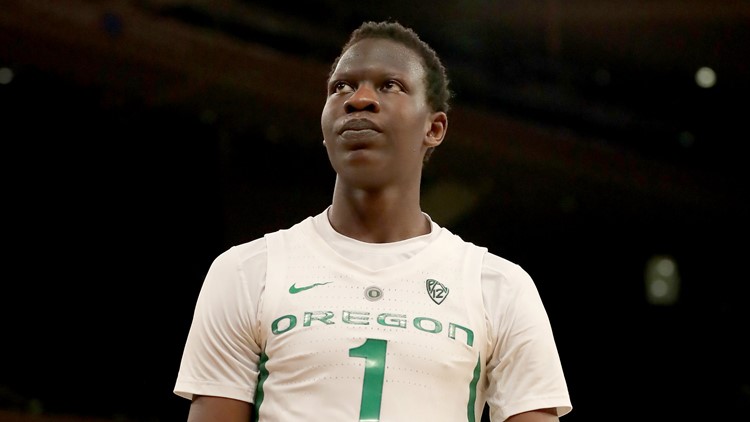 Photo by: Getty Images
Bol Bol of the Oregon Ducks reacts to a call in the second half against the Syracuse Orange during the 2K Empire Classic at Madison Square Garden on November 16, 2018 in New York City.

NEW YORK — In a surprising turn of events, the University of Oregon's Bol Bol is going to the Denver Nuggets.

The Nuggets made a wild move during Thursday night's NBA Draft, trading to get one of the most interesting players coming out of college this year.

After an unexpected slide into the second round, Bol was chosen with the Nugget's 44th overall pick.

The 7-foot-2 freshman offers an intriguing skill set with his rangy game and 7-7 wingspan.

He is the son of the NBA's tallest player of all time - Manute Bol - and played only a few games last year before breaking his foot.

Going into the season, Bol was considered a top five pick by some.

He dropped into the second round Thursday night, was selected by the Miami Heat, and Denver immediately traded to get him.

Zion Williamson was the No. 1 pick of the New Orleans Pelicans — a surprise to nobody who watched basketball this past season. But afterward, he couldn't hide his emotions, even though he along with everyone else knew what would happen Thursday night.

"Because I love the game of basketball," he said. "You can hear people say things like, 'Oh, that it was likely I was going to go No. 1.' But I guess you don't know until you actually go through it. Hearing my name called and I was able to make it on stage without a tear, shake the commissioner's hand, but in the interview, my mom was standing beside me, and my emotions just took over."

There might be tears of joy in New Orleans, too, after the Pelicans were able to get the Duke powerhouse who is considered one of the most exciting prospects in years.

The 6-foot-7, 285-pounder compiled a career worth of highlights into just one season, becoming the third freshman to be voted player of the year by The Associated Press.

His assault on the rims made him a favorite of college basketball fans, but his game is more than just dunks. Williamson averaged 22.6 points and 8.9 rebounds while shooting 68% from the field.

Wearing a white suit, he hugged members of his family and NBA Commissioner Adam Silver after his name was called first at Barclays Center.

Williamson will step into an open position in New Orleans, which recently agreed to trade All-Star Anthony Davis, the last freshman to win the AP award, to the Los Angeles Lakers.

The Memphis Grizzlies also quickly addressed a positional need by taking Murray State's Ja Morant with the No. 2 pick. The Grizzlies agreed to trade Mike Conley, their longtime point guard, to Utah a day earlier.

They got a good replacement in Morant, who led Division I with 10 assists per game as a sophomore while averaging 24.5 points.

"I have some big shoes to fill in Mike Conley," Morant said. "He's a great player. I wish him the best. Like I said before, it just means the Grizzlies see a lot in me."

RJ Barrett then made it two Duke freshmen within the top-three picks when the New York Knicks took the guard who actually edged out Williamson to lead the Atlantic Coast Conference in scoring. Knicks fans hoped they would get Williamson after finishing with the worst record in the league but seemed happy to end up with Barrett, loudly cheering and chanting "RJ! RJ!" when the pick was announced.

Barrett was also in tears after landing with the team he hoped would pick him.

De'Andre Hunter of national champion Virginia was taken fourth but won't be teaming up with Williamson. The Pelicans acquired the rights to the pick in the Davis deal but agreed to trade it shortly before the draft to Atlanta. The original trade can't be official until July 6, so Hunter was outfitted with a Lakers hit and the draft board behind the stage listed the pick as belonging to the Lakers.

The Cleveland Cavaliers then took Vanderbilt guard Darius Garland, who played in just five games because of a knee injury.

Then it was another pick who won't be playing for the team that made it, with Jarrett Culver taken at No. 6 by Phoenix with a pick that the Suns agreed to trade to Minnesota.