OFF THE AIR: Is Instant Pot a success or hot mess?

Laural Porter's new Off the Air blog brings personal reflections from our KGW News anchor. Follow her on Facebook to continue the conversation.

Laural Porter's new Off the Air blog brings personal reflections from our KGW News anchor. Follow her on Facebook to continue the conversation. Here's her latest installment:

PORTLAND, Ore. -- My hubby and I sat down to a tasty dinner he made from the hefty salmon he'd caught on the Kasilof River last summer in Alaska. it weighed more than 60 pounds and we were having the last two prized filets.

I admit it. My husband totally spoils me. I know I have been blessed with an incredible life partner. He had the beautiful dish prepared for me when I got home on my dinner break.

It's like magic to me. But, I know it's drudgery for him after his own long day at work. So, it's no surprise this was the topic of conversation that evening.

"Ali got an Instant Pot. She loves it," he said. Our daughter, Ali, had just moved to Seattle and was equipping her apartment kitchen.

"You haven't heard of an Instant Pot? Everyone is talking about them. How have you missed that?"

Somehow I'd missed the headline describing "Instant Pot" as one of the biggest sellers of the holiday season. Later, I did a little research thinking the "Instant Pot" could transform our busy lives.

The Wall Street Journal says Amazon delivered 27,000 Instant Pots in the U.S. during the holidays. The paper says "Instant Pot" enthusiasts have their own Facebook group and call themselves, "Potheads."

Its website says "Instant Pot" is a "Smart Multi-Use, Programmable Pressure Cooker." It claims to cook food 2 to 6 times faster using up to 70 percent less energy.

But the Wall Street Journal reporter also talked to some people who were decidedly not "Potheads." They described high anxiety over the pressure cooker. A school teacher in Atlanta returned hers. She said it was "scary and too complicated." Too many buttons to push.

Even a retired chef had a major fail with the "Instant Pot." She told the WSJ her attempt at making coconut shrimp bisque ended up looking more like cheese curds.

Others newbies report using the quick release valve only to have spaghetti or soup erupt like a volcano onto the kitchen ceiling.

Kitchen safety has been in the headlines recently since an episode of the popular NBC drama, "This is Us," featured a storyline with a faulty Crock-Pot. In the show, it may have led to a tragic house fire and mysterious death.

"Crock-Pot" issued a statement after the episode aired saying its slow cookers are safe. And "Instant Pot" says it has all kinds of safety features built in.

And it highly recommends users first read the manual to avoid kitchen calamities.

I'm not sure my husband and I are ready to become "potheads" yet. We probably have enough pressure in our lives without adding an instant pot of anxiety. But I'm willing to let the idea simmer-- slowly.

Do you have an "Instant Pot?" What's your experience been like?

Discuss this story with Laural Porter on her Facebook page 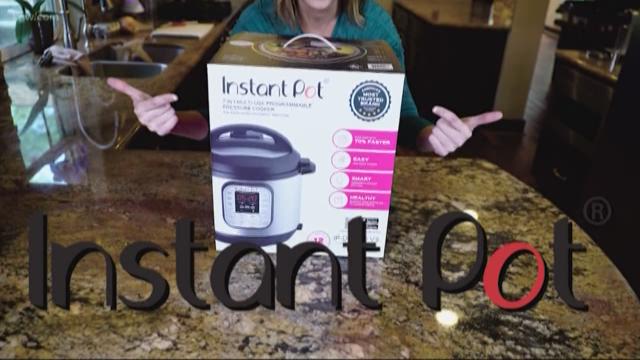