These were the top news stories of 2018

The stories of 2018 pulled at our emotional strings, tested us and gave us hope. 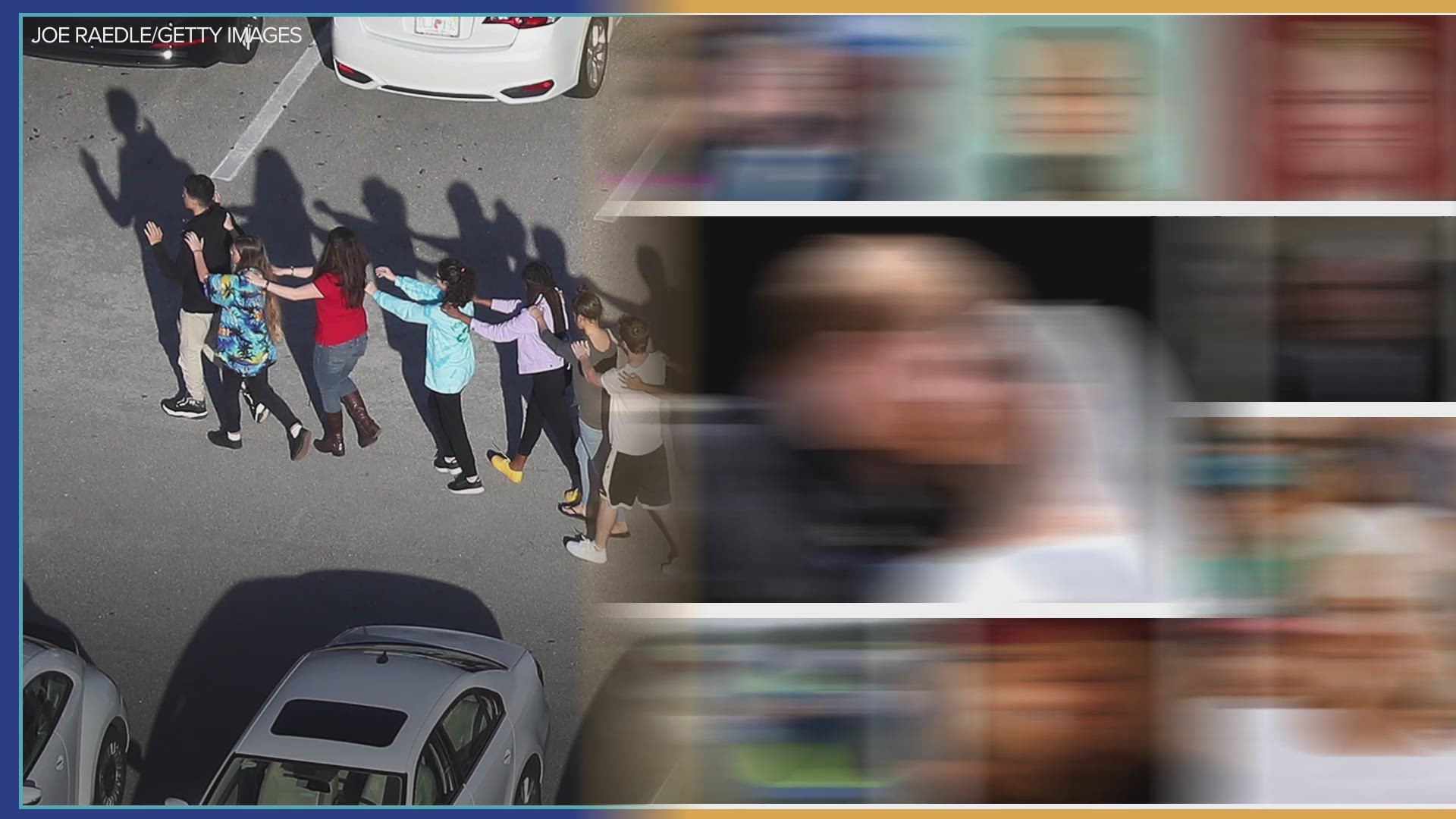 From mother nature’s relentlessness to political storms on Capitol Hill to an improbable rescue on the other side of the Earth and a royal love story shared by the world, the stories of 2018 pulled at our emotional strings, tested us, and gave us hope.

Seventeen students and staff were killed when a gunman entered Marjory Stoneman Douglas High School in Parkland, Florida, on Feb. 14. Students who survived the mass shooting later demanded action by lawmakers for tougher gun laws. The most visible sign of the student-led movement was the March For Our Lives on March 24 in Washington, D.C. and cities around the world. They also mobilized young people nationwide to register to vote.

1 / 30
Rob Carr/Getty Images
Nick Foles #9 of the Philadelphia Eagles celebrates with the Vince Lombardi Trophy after his teams 41-33 win over the New England Patriots in Super Bowl LII at U.S. Bank Stadium on February 4, 2018 in Minneapolis, Minnesota.

More than 2,500 immigrant families were separated under the Trump administration’s zero-tolerance policy enacted in April, sparking widespread outrage after images of children in cages became public. Migrant caravans with thousands of people moving from Central America to the U.S. became a campaign rallying cry for President Donald Trump before the November midterm elections. The administration canceled Temporary Protected Status for tens of thousands of immigrants living in the U.S. legally, and it pressed for an end to the Deferred Action for Childhood Arrivals program. About 5,200 active-duty troops deployed to the border in November. As the year closed, Trump’s effort to get Congress to put up money for his border wall led to the threat of a partial government shutdown.

The nation lost the 41st president, George Herbert Walker Bush, and his wife, Barbara, in 2018. The former first lady passed on April 17 at the age of 92. President Bush -- who was in office for the fall of the Berlin Wall and the end of the Soviet Union -- died on Nov. 30 at 94. They had six children, including former President George W. Bush, 17 grandchildren and eight great-grandchildren.

Royal love was in the air in Great Britain on May 19 as Prince Harry married American actress Meghan Markle. An estimated 29 million Americans tuned in to watch the nuptials. The family announced on Oct. 15 that Duchess Meghan was pregnant with the couple's first child.

Natural disasters in the U.S. took their toll from coast to coast and beyond. In Hawaii, lava flows from the Kilauea volcano destroyed homes and forced thousands to evacuate over the late spring and summer.

A busy wildfire season in California culminated with November's Camp Fire, which killed at least 88 people and destroyed thousands of homes in the town of Paradise.

History was made on June 12 as Donald Trump and Kim Jong Un became the first sitting U.S. president and North Korean leader to meet face-to-face for a summit. It came as somewhat of a shock to the world after the two leaders spent months lobbing insults at one another and demonstrating their countries’ military might. After the summit, both sides issued a vague statement on a nuclear-free peninsula without describing how and when it would occur.

Twelve members of a youth soccer team and their coach were rescued after spending 18 days trapped in a flooded Thailand cave. Members of the Wild Boars soccer team were found alive on July 2 after divers traversed a submerged passage that was so narrow in places they had to take off their air tanks. One by one, they guided the boys and coach out -- a journey lasting two hours each. The entire team made it out, but one diver was killed preparing for the rescue.

The investigation by special counsel Robert Mueller into Russia's interference in the 2016 presidential election rolled on. At least 33 people and three companies have been charged. Former Trump campaign aide George Papadopoulos already served a jail sentence. President Trump's former campaign chairman Paul Manafort faces a lengthy prison sentence. His former National Security Adviser, Michael Flynn, may or may not face jail time after a judge delayed his sentencing. Trump continued to call the investigation a "witch hunt" -- more than 100 times in 2018 on Twitter. At a July summit with Russian President Vladimir Putin, Trump appeared to accept Putin's claim that Russia was not involved in manipulating the election.

Another case may also hold more legal jeopardy for Trump. Federal prosecutors in New York said in December that the president’s longtime personal attorney, Michael Cohen, paid hush money before the election to two women who allegedly had affairs with Trump, and that Cohen did so “at the direction” of the president. Cohen was sentenced to three years after pleading guilty to a series of crimes, including campaign finance violations and tax evasion.

Loss of a maverick

Senator John McCain, an American hero who survived more than five years in a Vietnamese POW camp, lost his battle with cancer on August 25. McCain spent 31 years in the U.S. Senate and was the Republican nominee for President in 2008. He asked his presidential rivals George W. Bush and Barack Obama to deliver eulogies at his funeral, but most memorable may have been the tearful yet powerful tribute by his daughter, Meghan.

Battle for the Supreme Court

A contentious and partisan Supreme Court confirmation battle for Brett Kavanaugh became more heated after the allegation by psychology professor Christine Blasey Ford that Kavanaugh sexually assaulted her when they were teenagers.

Both Ford and Kavanaugh testified on Capitol Hill about the alleged incident.

Credit: Michael Reynolds-Pool/Getty Images
Supreme Court nominee Judge Brett Kavanaugh swears in at the Senate Judiciary Committee hearing on the nomination of Brett Kavanaugh to be an associate justice of the Supreme Court of the United States, on Capitol Hill September 27, 2018.

After a one-week delay for a limited-scope FBI probe, Kavanaugh was confirmed by the Senate 50-48. Ford's attorney said as recently as November that Ford was receiving death threats and couldn't go home.

Washington Post columnist Jamal Khashoggi, who resided in the U.S. and wrote pieces critical of the Saudi Arabian regime, walked into the Saudi consulate in Turkey on October 2 and was killed, according to U.S. officials. The Post reported in December that the CIA determined Saudi Crown Prince Mohammad bin Salman ordered the murder. President Trump has said there is nothing definitive linking bin Salman to Khashoggi's death, but both Republican and Democratic senators briefed by the CIA said there is no doubt bin Salman was aware of the plot. The Senate voted to try to force the Trump administration to end its military support for the Saudi-led war in Yemen.

TIME magazine named Khashoggi and other journalists who were killed, assaulted or imprisoned as its Person of the Year, calling them “The Guardians.”

Democrats won control of the U.S. House of Representatives, gaining 40 seats in November's midterm election. The freshman class is a diverse group that includes many women and minorities. Republicans increased its control in the Senate from 51 to 53 seats.

Credit: Win McNamee
Newly elected members of the House of Representatives pose for an official class photo outside the U.S. Capitol on November 14, 2018 in Washington, DC. (Photo by Win McNamee/Getty Images)

TEGNA’s Adrianna Rodriguez, USA TODAY, and the Associated Press contributed to this report