From a loving and fearless mother alpaca, to an unlikely political friendship, to silver linings during times of devastation, here are the 10 stories that tugged most at your heartstrings.
Author: KGW Staff
Published: 4:48 PM PST December 19, 2018
Updated: 8:34 AM PST December 20, 2018

As with any year, there was upsetting stories in 2018. But there were also stories that touched our hearts and made us feel proud about the good in the world

From a loving and fearless mother alpaca, to an unlikely political friendship, to silver linings during times of devastation, here are the 10 stories that tugged most at your heartstrings:

A remarkable act of courage and love. Surveillance video showed a cougar approaching a group of resting alpacas in Cook, Washington. The cougar then bit onto the baby alpaca’s neck and dragged him away. The baby’s mom, Amorette, chased the cougar back and forth across the pen until the cougar dropped the baby and ran away.

“She’s one tough little mama,” said Amorette’s owner, Angela Rogers. “I think that cougar thought it was going to be easy.”

Michelle Pierson was lying in bed watching TV in June, when her cat, named Mia, kept sniffing at a spot on her right breast.

“She came back up and just laid down on that right breast and looked at me like, ‘I’m trying to tell you something,’” Pierson recalled.

Days later, Michelle got the news from her doctor. Pierson said if it wasn’t for Mia, who was adopted from Willamette Humane Society in 2017, the cancer may have gone unnoticed and she may have died.

While Bush and Obama may seem like an unlikely duo, each coming from different political parties and different backgrounds, the two found kindred spirits in each other. That was shown in this cute moment during John McCain’s funeral service. The internet couldn’t get enough and would get more later in the year (we’ll get there soon).

A family in St. Helens was bracing to sleep on their boat after it died in the middle of the Columbia River in August. After asking about various rescue options, the family resorted to posting on Facebook to ask for help. Without hesitating, Rick Scholl, the mayor of St. Helens, headed out the door to rescue the family.

6.) Dog found ‘protecting the only house left on the block’ after Camp Fire in Paradise

Amid the rubble, the air thick with smoke, sat Ella, the border collie. Her paws were burned, and she was exhausted. For nearly two days, Ella did what Ella does: protect those she loves. Her own family's home was gone, but one single neighbor's home was standing. So, Ella waited there. Her loyalty touched the hearts of KGW readers.

For nearly two days, Ella sat at the only home left in her neighborhood, waiting for her owners to return.
Kayla Westman / USA TODAY Network

We told you there was more to come. Months after the initial candy (cough drop) handoff, George W. Bush was at it again! Bush led his family down the aisle at his father’s funeral when he reached into his pocket and handed a candy to Obama. The two shared a smile and a laugh. And again, the internet went wild.

4.) An unbreakable bond: The story behind Tracy Barry’s tattoo

During the summer, former longtime KGW News anchor Tracy Barry got her tattoo. As she says, getting a tattoo in your 60s is not on everyone’s bucket list but it was on hers. She explains why and the sweet story behind the design. 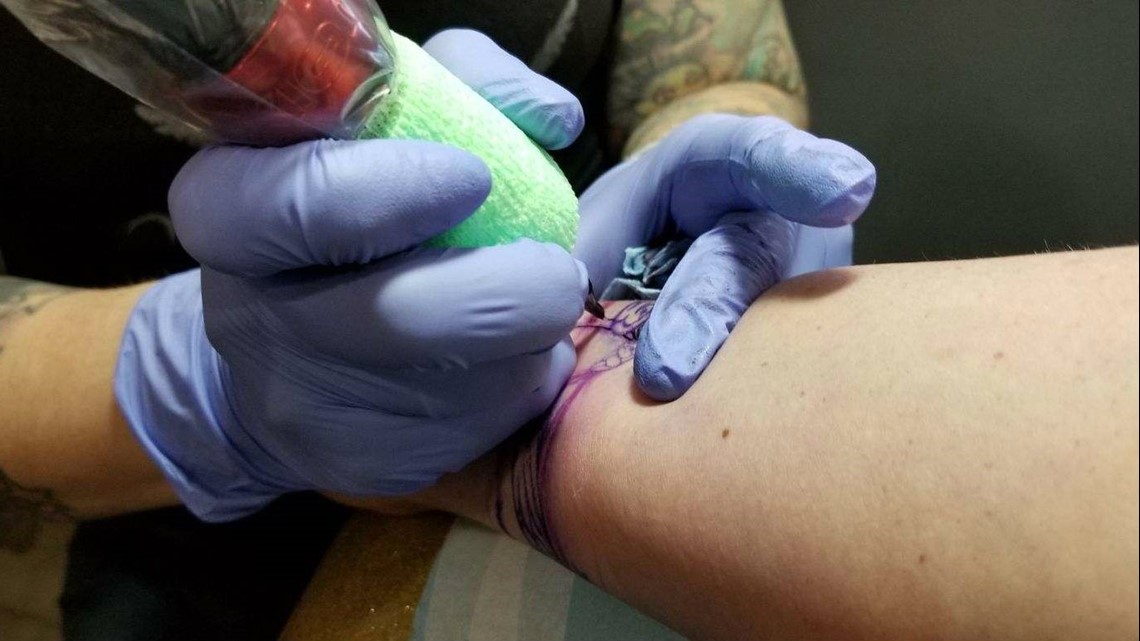 Stories like this is what made Tracy so beloved during the 33 years she spent with KGW. In case you missed it (or just want to see it again), you can watch Tracy say goodbye during her final newscast in October:

3.) Just after giving birth, she had to evacuate the hospital. Then her ambulance caught fire

Another shining moment of people coming together during moments of terror. Heather Roebuck had just given birth to her baby Hallie by C-section when the Camp Fire bore down on Paradise’s Feather River Hospital. But brave hospital staffers saved Roebuck from the devastating wildfire.

The Camp Fire in Northern California left a community devastated. So, the owners of Beavercreek Saloon in Beavercreek decided to do something. Patrick Whitmore had a motor home sitting his barn, and when he heard a single mom needed a motor home, he didn’t think twice about giving it to her.

Three young entrepreneurs wowed the ‘Shark Tank’ judges with their late father’s invention, but it was their story that captured the judges' hearts, and the hearts of KGW readers.