Watch: Second video shows another group of people climbing out of sewer in NW Portland

After discovering the initial video, a store manager looked back at old security video and discovered another incident of people climbing out of the sewer. 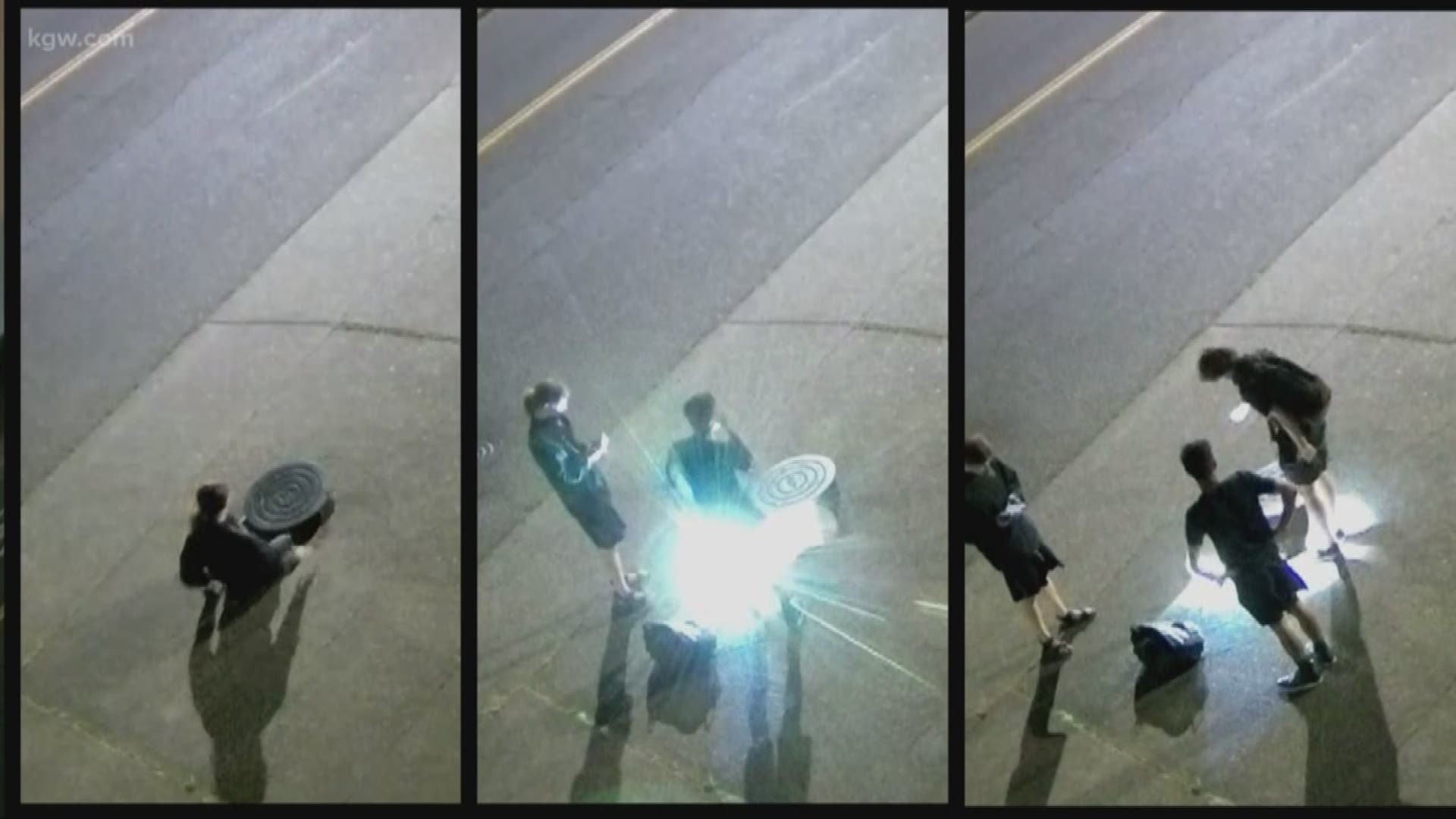 PORTLAND, Ore. — Two videos show groups of people pushing open a manhole cover and climbing out of a sewer in Northwest Portland.

The bizarre incidents were captured on surveillance video from Chown Hardware. The manhole is located in front of the company's shop at at 3727 NW Front Drive.

The first incident that was discovered occurred on Thursday night. Video shows an empty street at 10:44 p.m. when suddenly a manhole cover is pushed open from below and moved to the side. One person climbs out, followed by a second and third person, each with flashlights. Two of them then close the manhole. All three hang around the area for another minute, during which one of them changes pants. All three of them then walk away, appearing to leave a shoe behind, and go on with their night.

The manager of the Chown Hardware store first looked at the video because he noticed a shoe was randomly sitting out.

"It was [Friday] morning. I was looking out the window and noticed a shoe sitting in the parking lot, and now that I have security cameras, my first thought was 'Hey, how did that shoe get there?'" Kris Lake said.

Lake used to work at the Chown Hardware in the Pearl District. He said he saw a lot on those security cameras, such as car break-ins. But what he saw in the surveillance video outside the Front Avenue store blew him away.

"The manhole cover opens up and it's like a clown car. Three people pop out, start undressing, swapping shirts around, trying to get whatever muck off of them," he said.

Lake called police about the video but he said they didn't want to see it.

It turns out Thursday night wasn't the first time a group of people emerged from that manhole.

After making the initial discovery, Lake looked at old security tapes. He came across a previous incident, this one at 12:07 a.m. on June 2.

In this video, five people are seen climbing out of the same manhole. One of them even waves at passing cars while as he crawls out.

Caleb Olson says he's climbed out of that manhole. He last climbed through the sewers in 2012, gaining access through a storm water drain in northwest Portland. The area is fenced off, but with no signage.

"It's just like walking through a cave," Olson said. "You go through it, there's graffiti and it's pretty cool to look at."

Olson says getting through to the end is a tight fit.

Olson says the only way out is through the manhole or the way you entered the sewer.

Diane Dulken with the Portland Bureau of Environmental Services saw pictures from one of the videos and said what the people did was dangerous. She said they would have been exposed to untreated sewage as well as low levels of oxygen. In addition to the safety hazards, she said it’s against city code for them to be down there.

Dulken said when crews from environmental services go into the sewers they first send a sensor down to determine the oxygen levels and see if it’s safe for people. Then, they go down in a harness, so they can be pulled up if they get into trouble. Workers are also supplied fresh air through a scuba-type hose or with air exchanges.

Dulken said the bureau now plans to send crews into that area to see if there’s any damage or vandalism.

Portland Police say that those walking the sewer pipes could face a misdemeanor trespassing charge. The bureau says they are working with BES to determine the next best step.