The nation's second vaping-related death has been reported in Oregon. 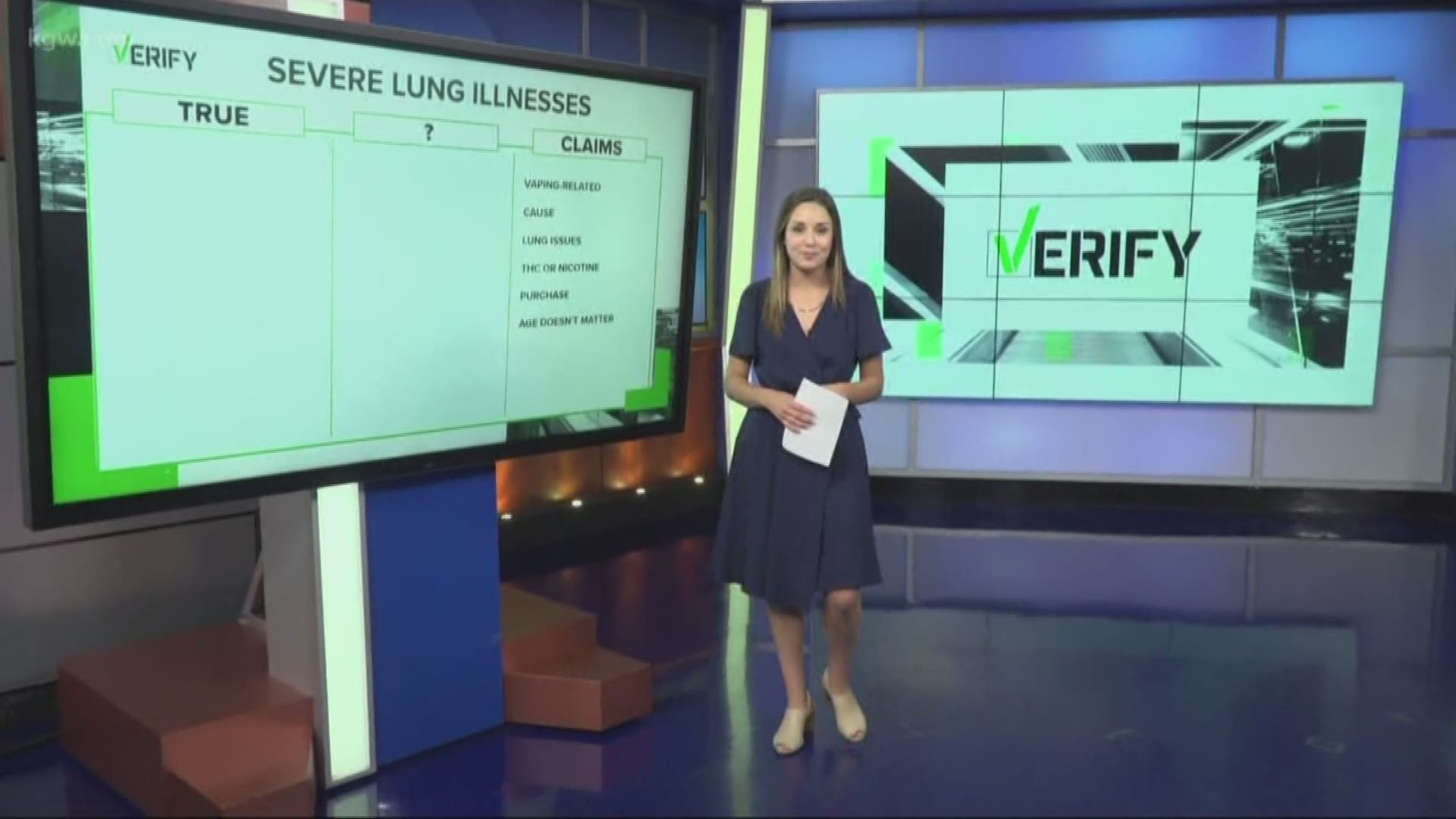 PORTLAND, Ore. — Hundreds of Americans have fallen ill with serious lung problems in recent weeks, and the Centers for Disease Control says all were using e-cigarettes or vaping.

We wanted to Verify several facts about this illness, which has lead to two deaths so far, one of which occurred in Oregon.

Our sources for this story are the CDC and the Oregon Health Authority.

1. Are all the illnesses related to vaping?

Yes, according to the CDC all of the patients who have gotten sick vaped or used e-cigarettes.

2. What's the cause of these illnesses?

There is no cause yet.

"We don’t yet know the exact cause of these illnesses — whether they’re caused by contaminants, ingredients in the liquid or something else, such as the device itself," said Dr. Ann Thomas with OHA’s Public Health Division.

3. What are the symptoms of these illnesses?

Symptoms can include cough, shortness of breath, chest pain, nausea, vomiting, diarrhea, fatigue, fever or weight loss. Symptoms last for several days or weeks, until individuals eventually check themselves into a hospital.

4. Are they related to cannabis or nicotine use?

Illnesses have been linked to both THC and nicotine users, so it's unknown what substance or chemical is causing people to get sick.

5. Where were the items purchased?

Items used by those who have gotten sick have been purchased both on the black market and at licensed marijuana shop.

“We don't know if it's specific products, we don't know if it's a specific chemical,” Oregon Poison Center Dr. Rob Hendrickson said. “What we do know is that there are a lot of cases in many many states and they're very severe reactions and people are being admitted to the ICU and put on ventilators."

6. Does it only affect young people?

No. Though e-cigarettes and vaping products have been heavily marketed to young adults and teenagers, and they are the population that uses e-cigarettes the most. Older adults are also getting sick, for example, the Oregon man who passed away from a respiratory illness in July was middle-aged.

Health officials urge anyone who has recently used vaping products such as e-cigarettes and is having difficulty breathing to seek medical attention immediately.

Do you have something you want us to Verify? Email Verify@KGW.com.