No, divorce rates in Washington didn’t rise during the pandemic

Despite added stress, one big factor may be keeping the divorce rate down during the pandemic. 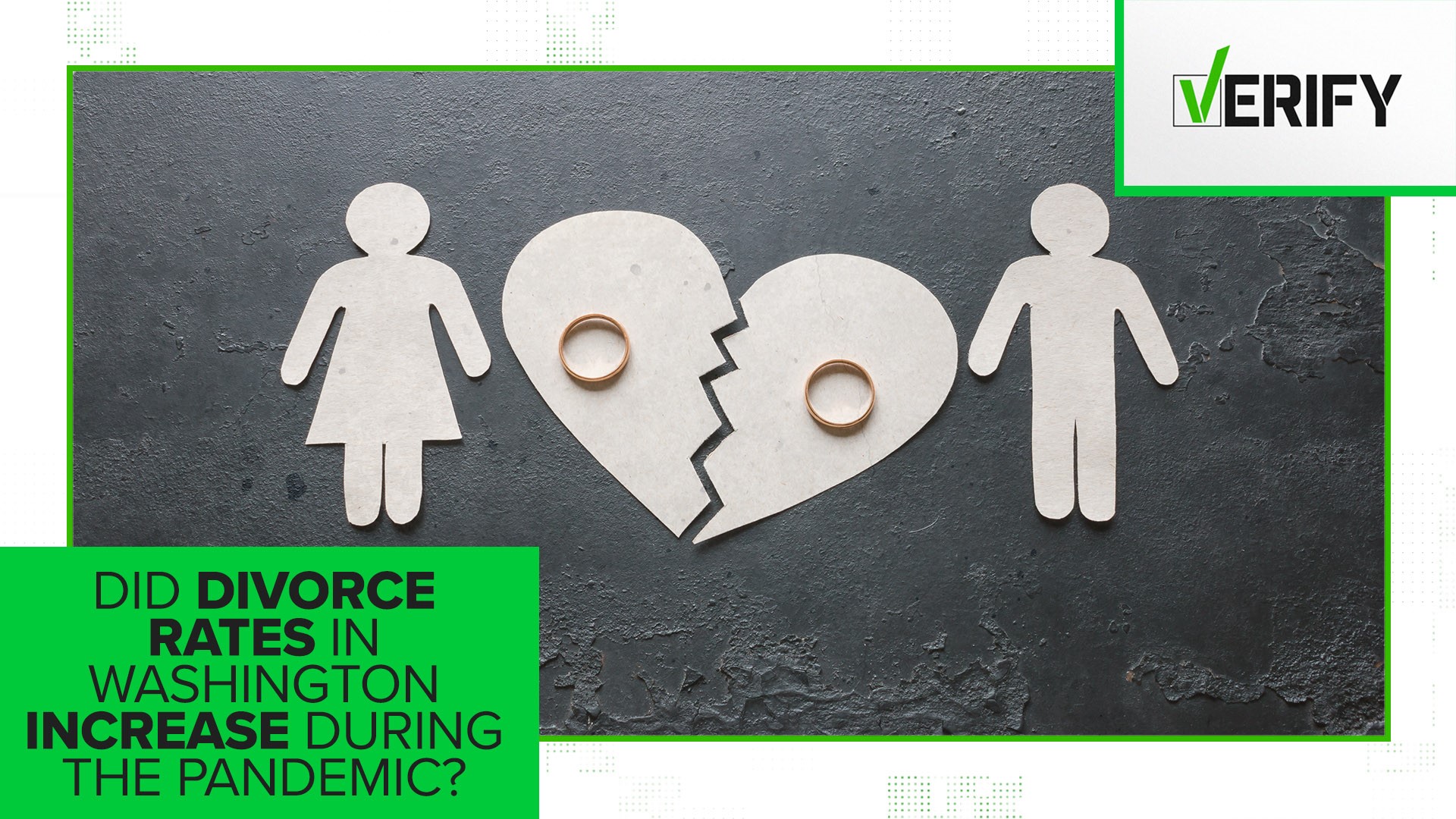 SEATTLE — The divorce rate in the United State dropped about 20% over the last decade, according to data from the latest U.S. Census.

But what about during the COVID-19 pandemic? Did the added stress affect marriages? Have divorce rates actually risen since the coronavirus entered our lives?

To find out, KING 5 combed through the last 20 months of caseloads in Washington State’s Superior Courts where divorces are processed.

We found dissolutions, which is the legal term for divorce filings, did go up in Washington state in spring 2021. But that's probably not because of the stress of the pandemic.

"There's a very pronounced seasonal pattern to divorce,” explained Julie Brines, a sociologist at the University of Washington with a Ph.D. from Harvard. “[Divorce filing] happens to peak in March, pretty consistently throughout the country, and then dips fairly dramatically in April. There also tends to be another peak in August and September, right after the summer vacation period."

In 2016, Brines co-authored a study that found divorce rates peak annually each spring, presumably because people give rocky marriages one last chance in the winter.

"There's a really intense focus on getting together with family members, celebrating, usually with really close family and kin, and the preparations that are involved are very time consuming," Brines told KING 5.

"So, people don't file; it's an emotionally fraught time to move forward with this sort of decision,” Brines continued. “There's another argument [that people are] giving a vulnerable relationship one last 'go' around the winter holidays."

The dip in divorce filings in spring 2020 is almost certainly related to courts being closed early in the pandemic, which might also explain the larger-than-average bump this past spring.

Seattle divorce attorney Janel Ostrem said even if more people are deciding to split up during the pandemic, the sheer mountain of emotional and logistical commitment a divorce takes is keeping the numbers down.

"Legally, you can't get divorced in Washington in less than 90 days," explained Ostrem. "It's a very draining process. People are typically unhappy for quite a while before they start a divorce process. They may need to do some work around parenting. If you're already stretched financially, emotionally, and timewise, you [may not] have the time and ability and the bandwidth to do it."

All of these factors like court availability, the logistical challenge of getting a divorce, and the seasonal tendencies allow us to verify that even with the added stress we are all under now, the number of couples filing for divorce has not gone up during the pandemic.