Federal officials confirmed an Amtrak train was hurtling 50 mph over the 30 mph speed limit when it careened off an overpass south of Seattle. 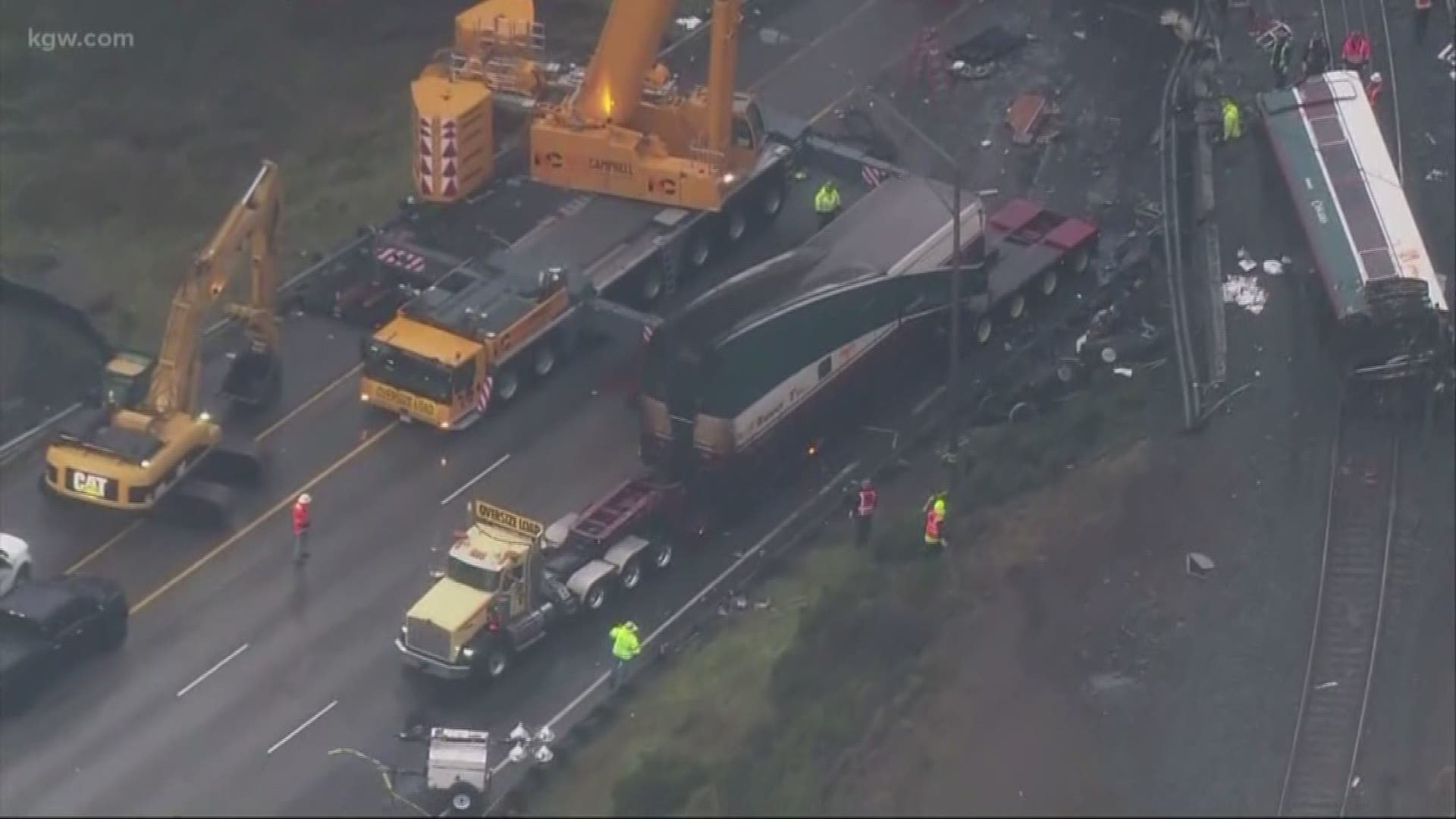 Jim Hamre and Zack Willhoite were both members of the Rail Passenger Association and All Aboard Washington. Both men were passionate advocates for improving rail passenger service in the Northwest, the RPA said.

“Both Jim and Zack have been advocates of transit and passenger rail for decades, and we can’t thank them enough for their work," said RPA president Jim Mathews.

Lloyd Flem, executive director of All Aboard Washington, said Hamre retired a few years ago as a civil engineer at the Washington Transportation Department. He says Hamre lived with his mother in Puyallup.

Willhoite worked for Pierce Transit as a customer service specialist. He had been with the agency since 2008. "He has always been deeply appreciated and admired by his colleagues, and played an important role at our agency," Pierce Transit said in a prepared statement.

The name of the third person killed in the crash has not been released.

Federal officials confirmed the Amtrak train was traveling 50 mph over the speed limit when it careened off an overpass near Tacoma, spilling cars onto the highway below.

Bella Dinh-Zarr, a National Transportation Safety Board member, said information from the event data recorder in the rear locomotive showed the train was traveling at 80 mph in a 30 mph zone when it derailed at 7:34 a.m.

I-5 southbound around the crash site was expected to be closed through the Wednesday morning commute, according to Washington State Patrol Trooper Will Finn. Cranes worked overnight to clear the derailed cars. Even after their removal, WSDOT inspectors must check the travel lanes for hazards.

Eighty passengers and five crew members were aboard when the train derailed and pulled 13 cars off the tracks. At least 50 people were hospitalized, more than a dozen with critical or serious injuries, authorities said. No one on the highway was killed.

Earlier media reports stated that as many as six people had been killed, but at a Monday evening press conference, officials said that there were only aware of three deaths.

A website that maps location and speed using data from Amtrak's train tracker app shows the train was going 81.1 mph (129 kph) about one-quarter mile from the point where it derailed, where the speed limit is significantly lower.

Watch a KING5 animation of the crash

A track chart prepared by the Washington State Department of Transportation shows the maximum speed drops from 79 mph (127 kph) to 30 mph (48 kph) for passenger trains just before the tracks curve to cross Interstate 5, which is where the train went off the tracks.

The chart, dated Feb. 7, 2017, was submitted to the Federal Railroad Administration in anticipation of the start of passenger service along a new bypass route that shaves 10 minutes off the trip between Seattle and Portland. 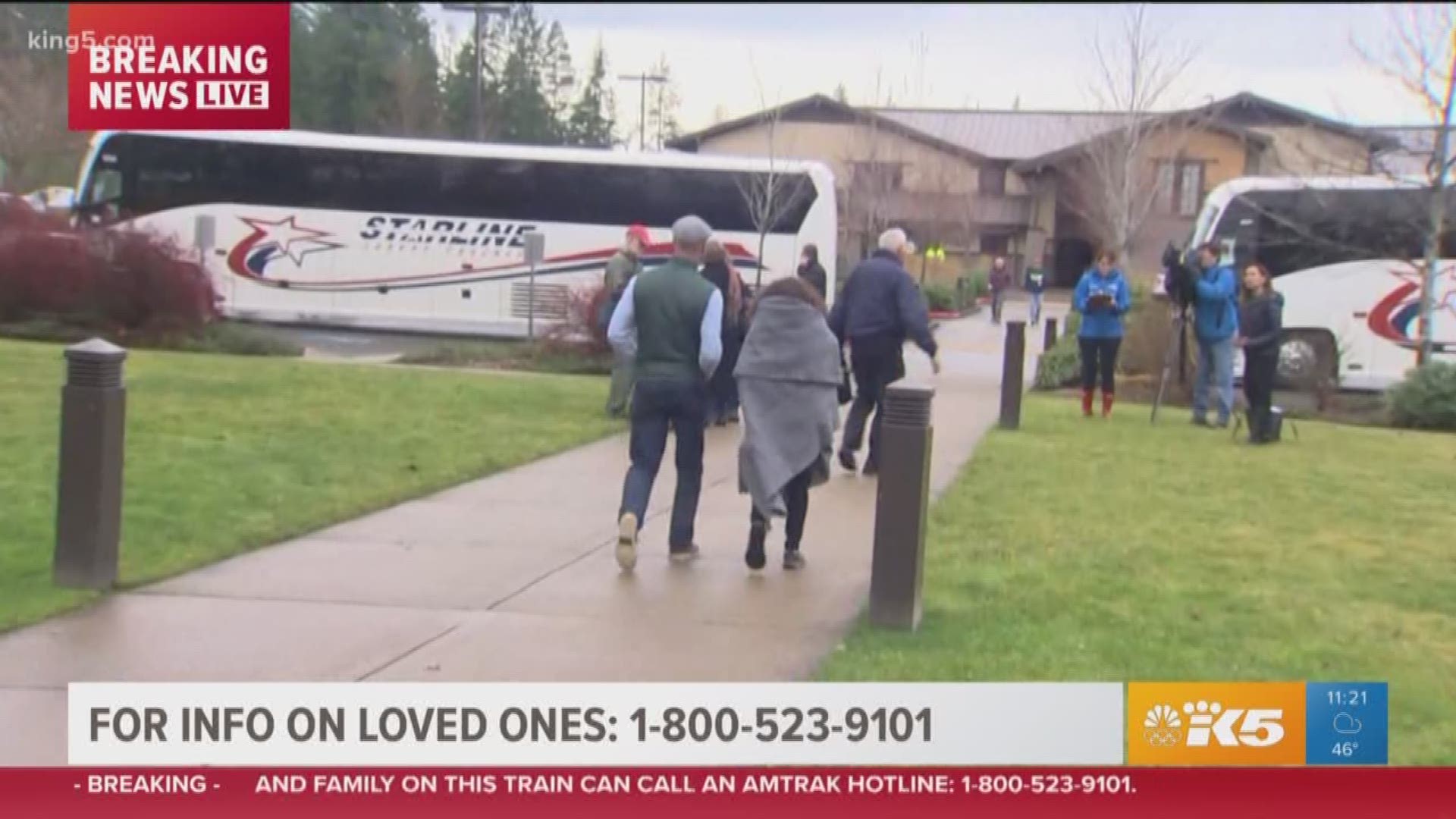 In a radio transmission immediately after the accident, the conductor can be heard saying the train was coming around a corner and was crossing a bridge that passed over Interstate 5 when it derailed. Dispatch audio also indicated that the engineer survived with bleeding from the head and both eyes swollen shut.

"I'm still figuring that out. We've got cars everywhere and down onto the highway," he tells the dispatcher, who asks if everyone is OK.

Aleksander Kristiansen, a 24-year-old exchange student at the University of Washington from Copenhagen, was going to Portland to visit the city for the day.

"I was just coming out of the bathroom when the accident happened. My car just started shaking really, really badly. Things were falling off the shelf. Right away, you knew that this was not something minor," he said.

The back of his train car was wide open because it had separated from the rest of the train, so he and others were able to jump out to safety. He was at about the middle of the train, either the sixth or seventh car, he said, and was "one of the lucky ones."

Daniella Fenelon, a 19-year-old from Southern California, was on the train taking a cross-country trip as part of her winter break. She said she was asleep when the accident happened.

"Suddenly there was just a jolt, and I didn't know what was happening," Fenelon said. She slammed into the seat area in front of her, and the windows exploded, said Fenelon, who was treated and released from a hospital with a possible concussion.

Dr. Nathan Selden, a neurosurgeon at the Oregon Health & Science University in Portland, said he and his son drove through the accident scene while traveling north to visit Seattle. The doctor asked if he could help and was ushered to a medical triage tent in the highway median. 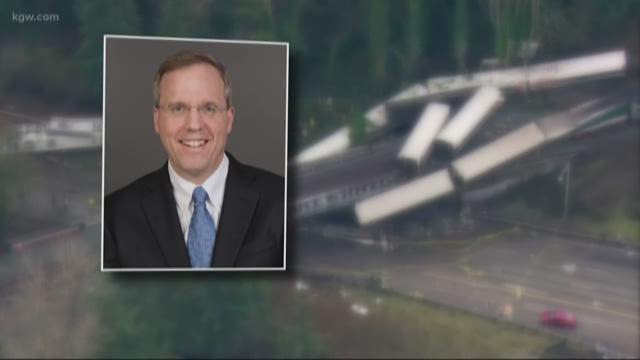 The most seriously injured had already been whisked away, but the patients he helped appeared to have open head wounds and skull, pelvic or leg fractures, as well as small cuts and neck sprains, he said.

He called it a miracle that an infant child he saw from the scene appeared completely unharmed.

Watch: Witnesses describe the scene of the derailment 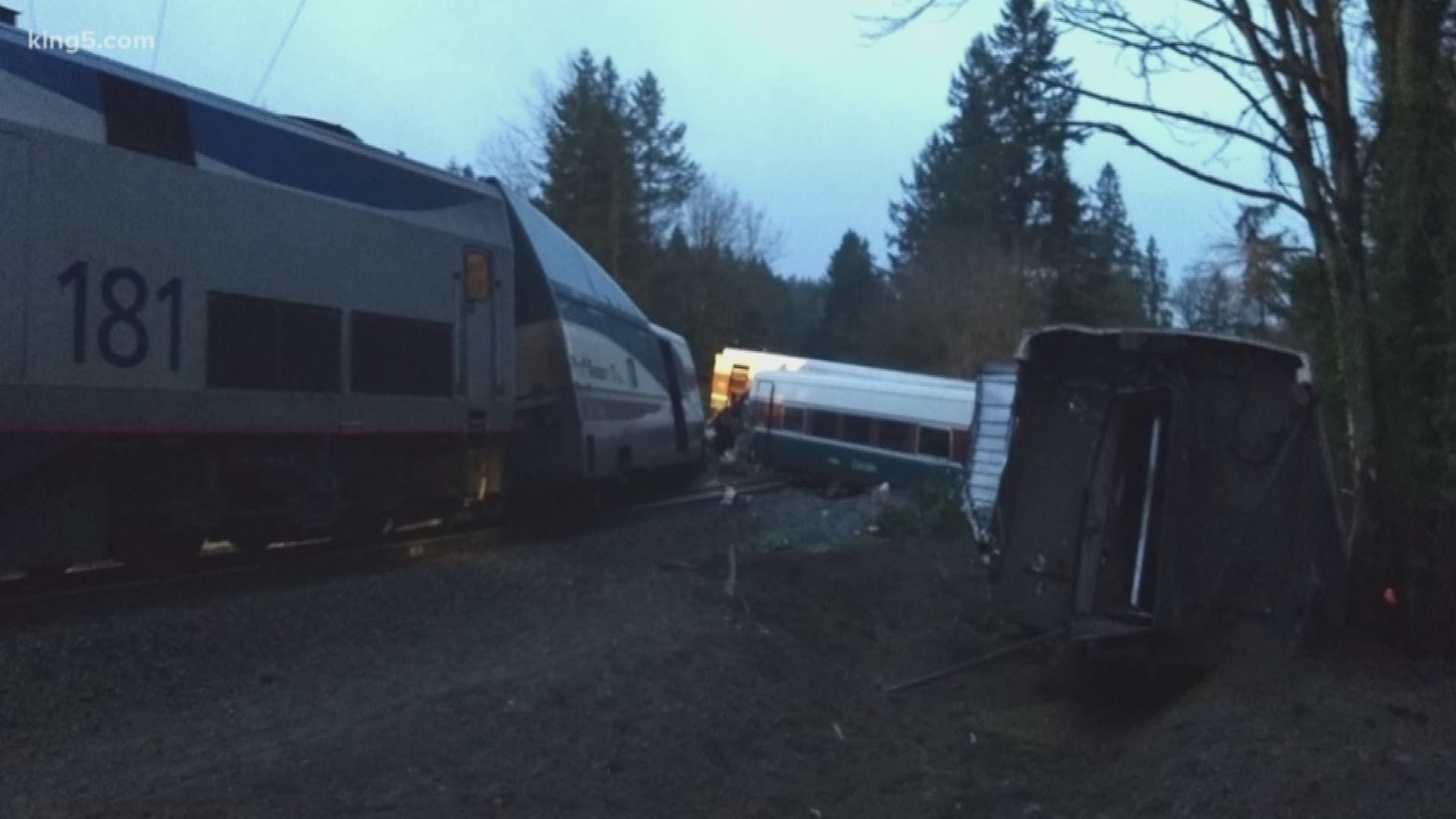 President Donald Trump used the deadly derailment to call for more infrastructure spending in a tweet sent about three hours after the accident. He said the wreck shows "more than ever why our soon to be submitted infrastructure plan must be approved quickly." The accident happened on a newly completed bypass.

The train accident that just occurred in DuPont, WA shows more than ever why our soon to be submitted infrastructure plan must be approved quickly. Seven trillion dollars spent in the Middle East while our roads, bridges, tunnels, railways (and more) crumble! Not for long!

My thoughts and prayers are with everyone involved in the train accident in DuPont, Washington. Thank you to all of our wonderful First Responders who are on the scene. We are currently monitoring here at the White House.

“We are still learning the impacts. We've provided a railroad transportation investigator to go up to assist," she said. "I saw the photos this morning. I had an early call with Governor Inslee. Our thoughts and prayers are with the families impacted by this horrible tragedy in Washington. We offered all of Oregon's assistance behind the state, whatever they need. We're there for them.” 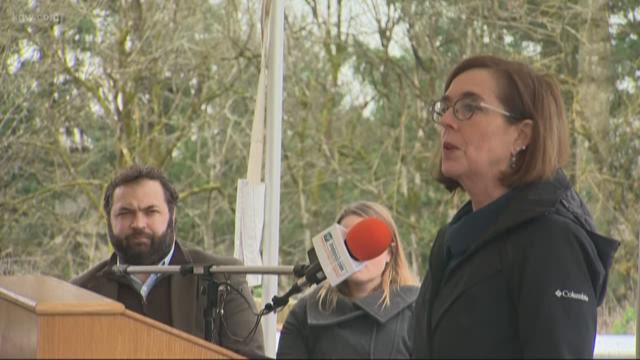 The train was making the inaugural run on the new route as part of a $180.7 million project designed to speed up service by removing passenger trains from a route along Puget Sound that's bogged down by curves, single-track tunnels and freight traffic.

The Amtrak Cascades service that runs from Vancouver, British Columbia, to Eugene, Oregon, is jointly owned by the Washington and Oregon transportation departments. Amtrak operates the service for the two states as a contractor and is responsible for day-to-day operations.

The Amtrak schedule called for the train to leave Seattle around 6 a.m. and arrive in Portland about 3 1/2 hours later.

Monday marked the first public use of the new bypass built on an existing inland rail line that runs along Interstate 5 from Tacoma to DuPont, near where Train 501 derailed. Track testing began in January and February in advance of Monday's launch and continued through at least July, according to the Washington State Department of Transportation.

The tracks, known as the Point Defiance Bypass, are owned by Sound Transit, the transit agency serving the Seattle area. They were previously owned by BNSF and were used for occasional freight and military transport.

The mayor of Lakewood, Washington, a city along the new route, predicted a deadly crash — but one involving a fast-moving train hitting a car or pedestrian at a grade-crossing, not a train tumbling off an overpass. At a recent public meeting, he called on state planners to build overpass-like rail structures instead of having trains cross busy streets.

LIVE BLOG: Amtrak train derailment on I-5 near DuPont

The maximum speed along the stretch of track is 79 mph, according to information about the route posted online by the Washington State Department of Transportation.

This is the second time this year an Amtrak train derailed in Pierce County.