Tsunami simulations for Washington show what could happen after 9.0 earthquake

Simulations from the Washington Geological Survey shows where large tsunami waves triggered by an earthquake will hit Washington state.

SEATTLE — For the first time, we are seeing in detail how large tsunami waves would roll out along the coast and through the inland waters of Washington state.

The simulations from the Washington Geological Survey are based on scientific modeling programs. They show how a large tsunami would play out in Puget Sound and how much time we have before a tsunami reaches us.

Scientists with the Washington Department of Natural Resources are reluctant to call them “animations,” as that implies this might be a cartoonish illustration of what happens. Rather, the simulations are based on a lot of math reflecting the energy from a magnitude 9 earthquake, the shape of the land below the water, coastal surfaces which can cause the wave energy to reflect offshore, among other factors.

“The range does vary, but some of these waves are incredibly tall,” explained Corina Forson, Washington state’s Chief Hazards Geologist. 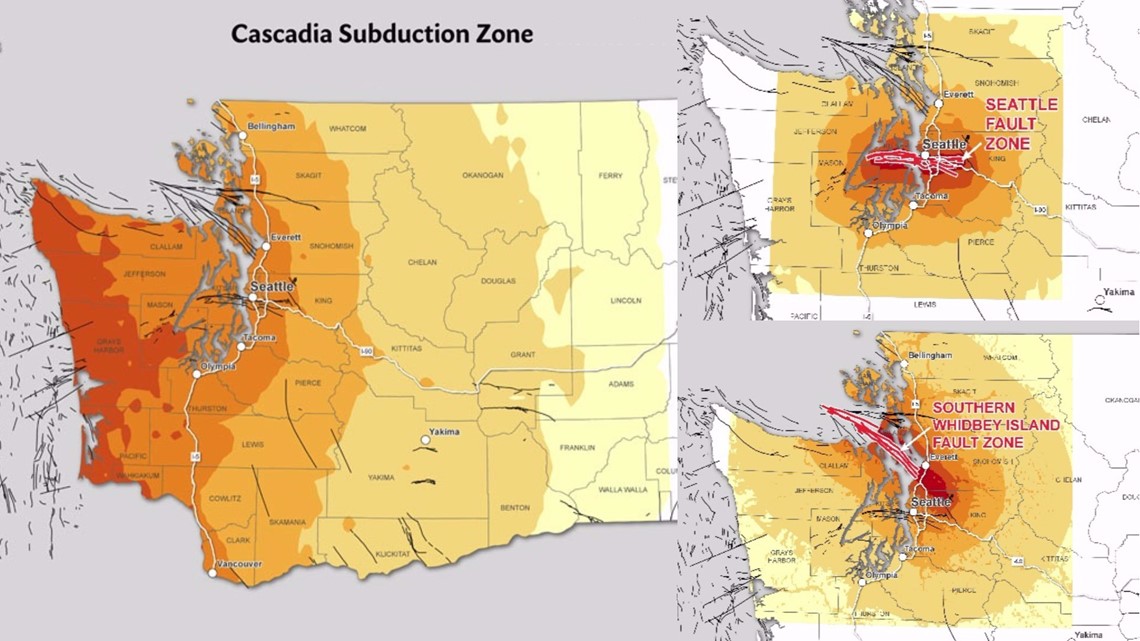 Why you should be prepared: 3 big earthquake threats in PNW
The western half of Washington state is considered earthquake country, with the potential for very large quakes. Scientists have their top three. First, there's the Cascadia Subduction Zone running roughly parallel to the Pacific Coast from northern California past the northern tip of Canada's Vancouver Island.

Those tall waves, based on previous inundation modeling, can top 60 feet. Although the program only indicates in red that the waves in the simulation are over 10 feet.

But the simulations don’t just take into account wave height but also wave troughs, which are shown in blue. One characteristic of tsunamis is that the energy, or shock-induced into the water by the earthquake, results in both.

The water that becomes a tall wave must come from somewhere, and that is the trough where the water leaves an area, only to come charging back in. This also sets up a trap for people. In the massive 2004 Indian Ocean tsunami, tourists in Thailand unaware of the earthquake a long-distance away became curious when the water suddenly left the beach. They ran out onto the then waterless flats, only to be killed when the tsunami waves came roaring back in.

“That’s one of the things we struggle with messaging. It's not just the wave, it’s the trough,” Forson explained. “When you see the water recede, that could be an indication that the tsunami wave is coming.”

The simulations are a work in progress. While the overall state map now exists, smaller detailed simulations in individual areas will be issued over the next three years.

One of the simulation areas now complete is Bellingham in Whatcom County. The complexity of coastline, islands, channels, and underwater features come into full view after the tsunami waves make it through the Strait of Juan de Fuca.

Bellingham also gets into the speed of currents which add to the danger, especially for ships or anybody who is caught on the water.

“It’s really interesting to see how the wave interacts with the coastline and see wavefronts bounce off different features in the topography and the bathymetry,” said Forson. Bathymetry is the study of the ocean floor. “It’s interesting to see how it propagates through areas where we don’t have published inundation maps.”

The first-round simulations are of a magnitude 9 earthquake along the Cascadia Subduction Zone where the North American tectonic plate meets up with a plate making up the ocean floor off Washington, known at the Juan de Fuca plate. It’s the shift where the fault reaches the surface under the Pacific Ocean where the tsunami gets its start.

The Washington Geologic Survey, helped by additional funding from the state Legislature, is also providing communities information to grapple with other tsunami scenarios such as another 9.2 quake in Alaska as it did in 1964.