A Portland-area man is talking about the pulse-pounding experience he had with violent protestors in downtown Portland a little over a week ago. 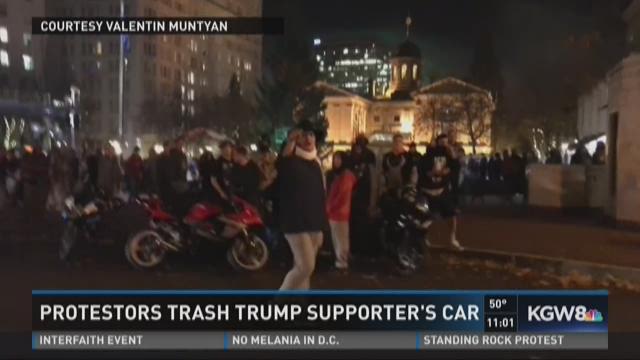 PORTLAND, Ore. -- A Portland-area man is talking about the pulse-pounding experience he had with violent anti-Trump protestors a little over a week ago, saying he's still in shock.

The incident was caught on cam and Muntyan uploaded a video to his YouTube page. The Jeep is in the middle of a big crowd of anti-Trump protestors.

Muntyan said he was driving with his brother and nephew when at an intersection, someone noticed the flags on his car and asked whom he voted for. He was honest.

"I told them I support U.S. elections results and I support Trump," said Muntyan.

"They surrounded us and started ripping off the flag," said Muntyan who had a couple flags hanging on his car. "They smashed the windshield with a bat."

Rioters also smashed a headlight and a window. His car was even spray painted.

In the video, individual protestors can be heard telling Muntyan to leave because it was getting dangerous.

"I was fearful for my life," he said.

He was eventually able to weave through the crowd and connect with police.

Some demonstrators wondered about Muntyan's motivations for being downtown, saying he was trying to incite them.

"We were just driving by," said Muntyan.

He said he moved to the U.S. from Ukraine about 16 years ago.

"I love this country and I'm proud to be U.S. citizen," he said.

But what happened isn't something he expected.

Portland Police arrested 20-year-old Gavin Hotchkiss in Milwaukie for his part in vandalizing the Jeep and other cars and businesses.

In the meantime, Muntyan is still wrapping his head around what happened.

"My family is still in shock about what happened and we feel not safe," he said.