After eight full days without power, Tom Smith, a quadriplegic, says his electric wheelchair is running low on power. 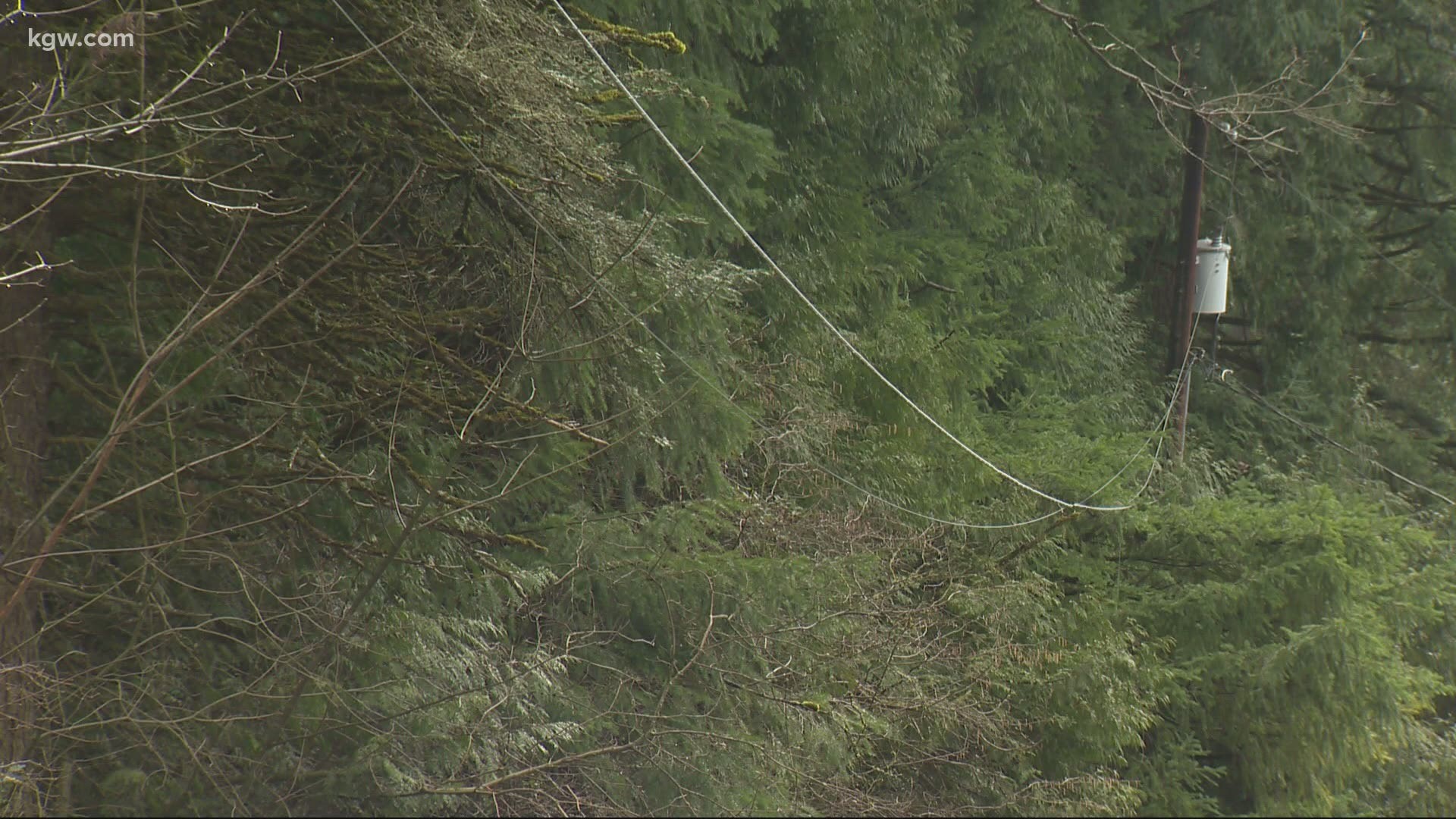 MULINO, Ore. — Tens of thousands are still without power in Clackamas and Marion counties more than a week after the region was pelted with snow and ice last weekend.

"It's been cold. I haven't been able to be active," said Tom Smith, who lives in the Carver area of Clackamas County.

Smith's power went out on Friday and hasn't come back on since. He's a spinal quadriplegic and relies on his electric wheelchair to get around.

"No way I can get around without it. It's my legs," Smith said Saturday over a Zoom call.

He has about 25% of his chair's battery left, but said it will most likely run out of battery power by Sunday. To help conserve the chair's power, his caretaker David Bouret pushes him around.

Temperatures in the house have risen to the mid-60s during the day and have dipped down into the 40s and 50s at night.

"This has probably been one of the worst situations dealing with trying to motivate or get around or function wise because it's been so cold," Smith said.

At night, he sleeps on a special air mattress pad that regulates pressure points to prevent bed sores from forming. Bouret said getting bed sores can be very dangerous.

"If he gets those, they're really deep and they go all the way to the bone," he said.

Bouret said at night, he repositions Smith every couple of hours. "He's been getting cold and he doesn't sleep good at night for not running the air mattress for a few hours. But when it goes out, he wakes up kind of sore, and that's when I have to roll him over. When he's getting achy and sore.

The two have a generator to help power the air mattress, but it can only run a few hours at a time before needing to cool down. They said they can't use it to charge the wheelchair because they are afraid it could damage the electrical components, just like it did to their refrigerator.

In the Clackamas County community of Mulino, Tyler Roses lives along Ringo Road. Down trees, fallen branches and down wires across the road have kept him and his family without power for the last eight days.

RELATED: Thousands still without power in Marion County one week after ice storm

"I've never seen the street like this before," Roses said. "There's usually one tree down, two trees down. So we go out of power quite frequently on this road, just given the nature with all these maples. Never like this."

Roses uses a generator that he says he bought after the September wildfires for situations like this. He's able to power his well and keep his refrigerator going but most of all, he's just trying to stay warm.

"My wife and I, we've been just staying inside staying warm by the wood stove. We learned our lesson by the wildfires and bought a generator while they were still in stock."

Up the street, Mike Raub lost power late Thursday night just as the storm was coming in. After nine days without power, it was restored Saturday morning.

"We've been out here 18 years and we've had ice storms before, but nothing like this. Everything was coated in 3 inches of ice," Raub said.

He said cleanup on the property has already begun and will require the removal of dozens of trees.

"I did a tally around the landscape portion of the house and I have 40 trees that need to come down. Devastation was unbelievable," Raub said.

PGE said it had hoped to have power restored to all but 15,000 by Friday night, but the amount of damage to power lines has slowed down their progress. Saturday morning, power was still out to 52,000. By 5 p.m. Saturday evening, it had been reduced to fewer than 40,000, according to PGE's outage map online.