'They had the locks changed': Squatters stake a claim in vacant North Portland house

When squatters settled into a little blue house in limbo in North Portland, neighbors and an attorney tried to take action to get them out. 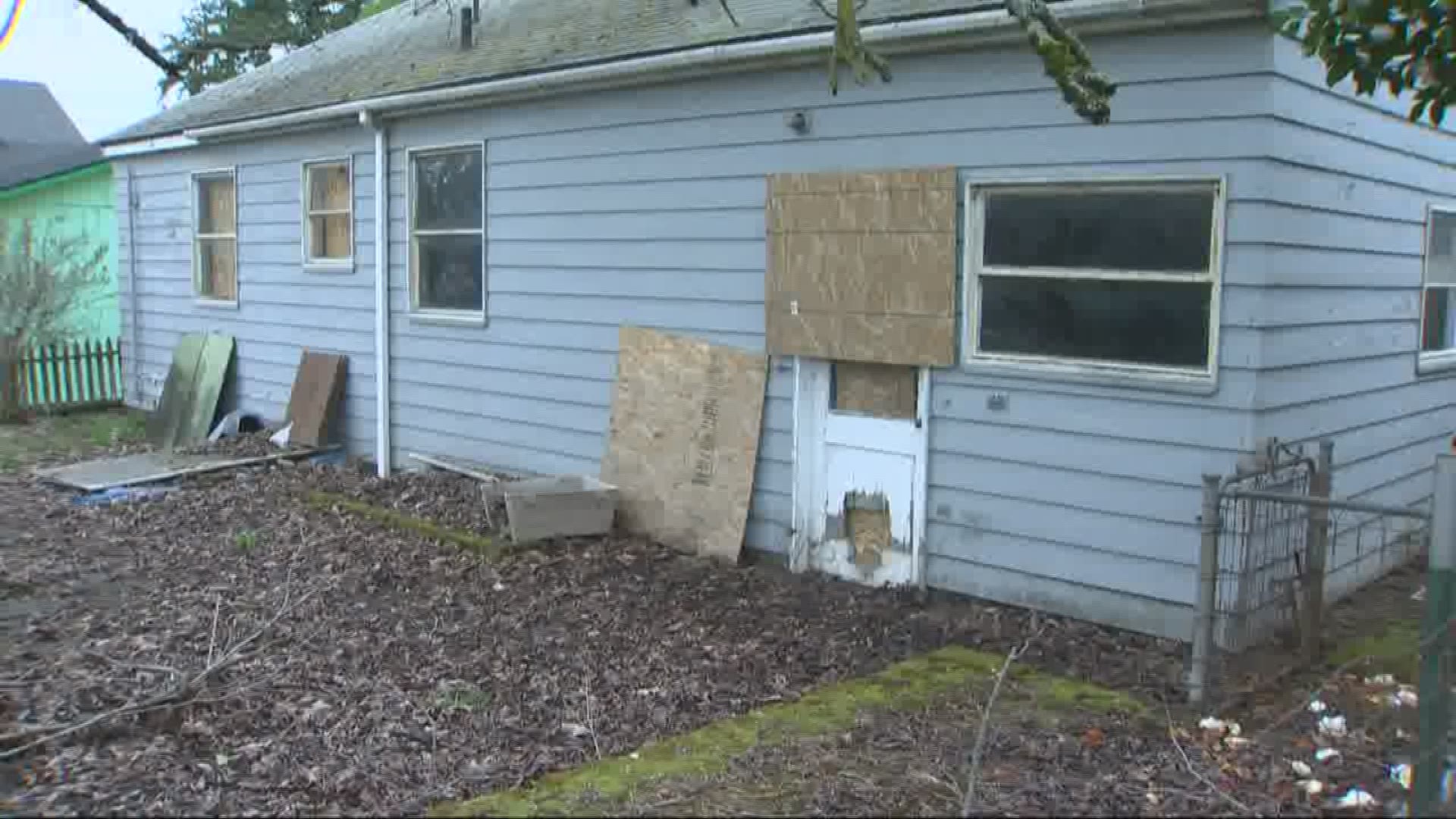 PORTLAND, Ore. — As our homeless crisis mounts, squatting persists here in Oregon and across the U.S. That's when somebody illegitimately stakes a claim on another person's property.

Squatters are often treated as tenants instead of trespassers, and evicting them is a draining ordeal.

When squatters settled into a little blue house in limbo in North Portland  neighbors and an attorney tried to take action to get them out. The squatters made the house their home – for months. Boarded windows and doors didn't keep them out; they’d break them to get inside the abandoned home, according to neighbors.

"At night time, they would come out at early morning hours rather than normal hours,” said Richard Tennant, a neighbor who lives across the street. “It's very difficult because we have multi-generations living here.”

Tennant and other neighbors say the illegal occupants in the Portsmouth neighborhood home were doing drugs.

How squatters were able to call the little blue house home

After the homeowner, a woman named Anh, passed away last year, the house sat vacant. She’d lived there for around 40 years. Anh didn't have close blood relatives to take over the house, so it went to the state, which then went on the hunt for an heir. That proved to be very difficult; there’s an ongoing genealogical search with the United States and Vietnamese consulate to find and prove her legitimate heirs.

Gresham-based attorney Aaron Smith was brought in to represent Anh’s estate in probate – the legal process that occurs after someone passes away.

“Because of the time that it takes between her passing and finding somebody to administer the estate, before they contacted us the house sat vacant. And during that time it had been broken into at least once,” Smith said. “Then, it appears sometime at the end of December or beginning of January, someone had been repeatedly entering and then eventually remained.”

Shockingly, Smith discovered the squatters changed the locks and put the garbage service into their own names.

He says when Anh passed, the place was left unlivable.

“It was covered in black mold, covered in garbage, completely unsafe for a few people to be in,” Smith said.

Smith asked police for help to get the squatters out, but they couldn't do anything; their hands are tied unless trespass can be proven. The issue is seen as civil rather than criminal. If police respond to a property and squatters refuse to leave, law enforcement cannot remove them at that time.

“The only way to get them out is to get a court order proving they are not tenants, and therefore not allowed to remain, treating them as if they were renters,” Smith explained.

The saga played out in court

Obtaining an eviction was a lengthy process. During the time it played out in court, the squatters remained in the home, obstinate and set on staying.

The cumbersome process shows there are no protections for the property or owner, Smith said.

“Squatters have a certain amount of rights once they've entered the home and actually remained in the home. And the length of time they've been there determines a lot of those rights as well,” he said.

Smith says neighbors are ignored throughout the ordeal. He believes each situation must be treated as a people problem, rather than a property problem.

“This is something that happened unilaterally to the landlord and to the neighbors. So because we’re treating it like a contract we’re ignoring a lot of the parties – we’re ignoring owners’ right to get their property back and that’s important," Smith told KGW. "But I think more important is the neighbors."

Meanwhile, Tennant took things into his own hands by handing out informational flyers to his neighbors in an effort to make them aware.

Irene Schuster lives right next door to the vacant home. She also tried to get help from law enforcement.

"I'm a widow, there's a widow on the other side,” she said. “I can't tell you how many times I called the police. And nothing could be done.”

After Smith filed an eviction complaint in Multnomah County Circuit Court at the end of February, the process dragged on for almost a month. Eviction complaints and summons were posted in early March, followed by the circuit court judge's landlord tenant eviction judgment.

Hearings took place but the people living in the house did not show up. Court records show they filed an ex parte motion later in the day after the initial scheduled appearance, which stretched the process even more. The judge eventually issued an order to vacate and gave the squatters a few days to leave. But they didn’t.

The saga ended and they packed up and left at the end of March.

A people problem, not a property problem

“The current policy is trying to protect: It's protect the tenants as much as possible and there's a portion that's just been missed,” Smith said.

The problem is, squatters are being treated as legitimate tenants with legitimate rights, even though they don't possess any rights.

"If somebody has entered illegally and remained illegally that's a separate issue,” Smith said.

Schuster and Tennant think it should be a criminal issue and not a civil one. After witnessing and experiencing all that he did, Tennant feels strongly that police should be given more rights and the ability to enter the home and find out the real story.

"They've broken into a home, on property they have no permission being on, so they've broken a law,” Schuster said.

On the other hand, Smith feels these types of cases are missed opportunities to help some of the community's most vulnerable who are living in filth or unsafe conditions.

The little blue house is now undergoing renovations before going on the market. In the interim, it will stay vacant. Neighbors including Schuster and Tennant will stay on edge, but vigilant.

"We know now what we have to try to do to protect our property; everything has to be posted: 'No Trespassing',” Schuster told KGW. “But I don't feel like it's finished.”

This is a unique case where the house was in probate and there wasn't someone to take it over immediately. But squatters do also stake their claims inside homes in foreclosure and rental properties.

"Squatters have a lot more rights than tenants even do and when property is in that probate process it’s locked down, there’s no transfer of anything," local realtor Alexander Phan told KGW.

Phan says this was a common practice and problem during the recession and in the years immediately following. But he continues to come across squatters in homes of all prices, size and age across the Portland metro area.

"I personally have come across people seeking shelter under eaves, porches, back decks, inside the house, in closets, in crawl spaces even," Phan said.

It can be dangerous for realtors, and Phan says he has called police on a number of occasions to come out to listings where they knew someone was inside who shouldn't be.

But police may hear a different story from the squatters inside, and if they can't contact the homeowner or, as mentioned, prove trespassing, police don't have the right to remove the person or people.

"The perception is that squatters can get away easier with these rules," Phan said.

How to protect your property

Experts say you have to keep watch over your own place.

First, educate yourself on this issue. Whether you’re a property owner, renter, management company or realtor it’s important you know your rights and what you should and shouldn’t do if you find an unwelcome squatter in your property. Smith says you cannot participate in “self-help,” which is when you attempt to get your property back.

If your property is vacant and in a different state, consider hiring a property management company.

If a squatter does take over your property, call police immediately.

Ultimately and unfortunately, if they don't leave on their own accord you'll likely have to take the squatters to court.