The power of a story: Those struggling with mental illness share stories of hope at 'My Story My Superpower' show

In celebration of Mental Health Awareness Month, ASHA International is hosting My Story My Superpower storytelling show Wednesday, May 29, to end the stigma surrounding mental illness. 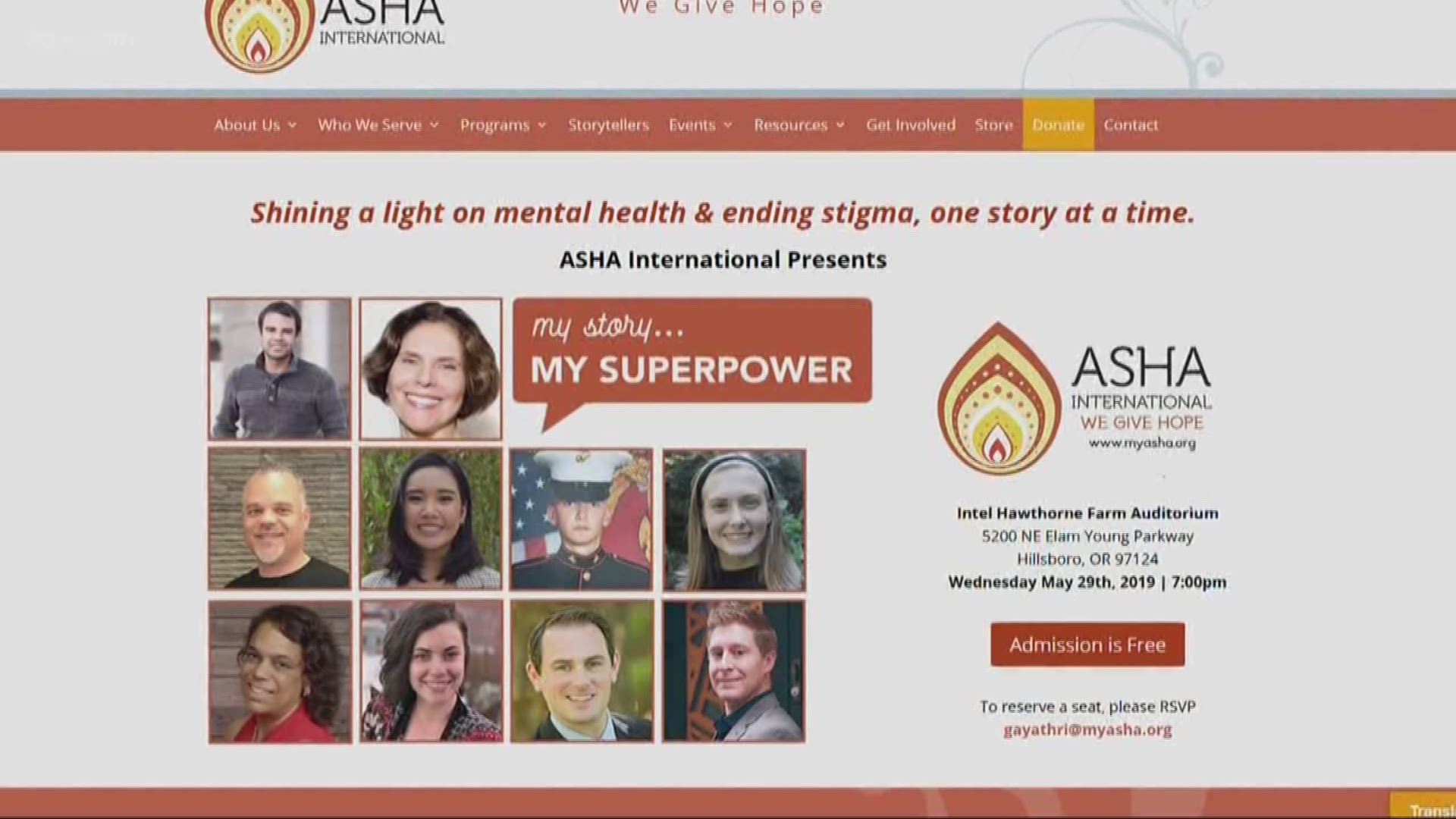 PORTLAND, Ore. — Sharing our stories has the power to bring people together to make them feel like they're not alone and ultimately save lives.

That intention is at the heart of an upcoming show, "My Story My Superpower," in celebration of Mental Health Awareness Month.

Nonprofit ASHA International is putting on the show to shine light on mental health and end the stigma - one story at a time.

Their goal is to inspire hope in people living with mental illness, help by sharing insights, and promote health by connecting people with social supports and community resources.

Next Wednesday, 10 people are sharing their stories of struggle, resilience and hope.

John Boylston is one of those people.

He doesn't fit his own stereotype; he’s a successful attorney, struggling with mental illness.

“About 10 years ago I wanted to quit my legal career. I was working at law firm in LA, had a great job and just figured out I wasn’t that happy. And I couldn’t tell what was work and what was life, what was me,” Boylston said.

Boylston says he hadn't been happy in years.

“I just wanted to quit and run away. And a friend convinced me to get help or talk to somebody first.”

Turns out, a therapist diagnosed him with generalized anxiety and a form of depression, like a lot of attorneys. Through therapy and medication he discovered law is his calling.

“It was really clear to me I had never heard a story like my own and I think that’s probably why it took so long to get help or even realize something was going on. I have a stressful job and so people expect to be stressed out when they have a stressful job. So it was kind of the idea what’s the job and what’s me. And if I had heard a story like mine maybe I would have thought to get help earlier.”

That's why he's sharing his truth in "My Story My Superpower" next week.

Molly van der Werf will be on stage, too.

“My story starts out when I was in high school,” van der Werf said. “I got caught up in the wrong crowd.”

She started abusing drugs and alcohol, even as she was in therapy and on medication.

“I started suffering from panic attacks and depression and anxiety. I felt like I was kind of in this loop of the substances I was using were causing me to feel like this,” she said. “It was hard to get out of.”

She says her life spiraled out of control when she got into harder drugs. She was lost, unsure of who she was. She says she didn’t care about anything but getting high.

Then before she graduated high school, her dad had a heart attack and suddenly passed away. Her life continued to spiral.

A few years later, at 22, she had her first manic episode; she thought she could read people’s minds and that songs on the radio were about her. She was talking to random strangers, believing they were her deceased father.

Her family was scared. They got her into a psychiatric hospital, where she had three different hospitalizations.

She was finally diagnosed properly and treated for bipolar disorder. Today, Molly is stable and practicing and teaching yoga has become her outlet.

“I really wanted to help other people. And I felt like people that struggle with mental health like I do and have before can really benefit from yoga.”

Molly can empower others battling similar demons by talking about her struggles. In addition to speaking at this event, Molly travels to local high schools and speaks to teens about mental health and promotes well being. Her goal is to empower students to share their stories.

“I'm here to try and pave the way for other people,” van der Werf said. “It’s my superpower because it’s very different, not everybody deals with same thing that I went through and I want to turn it into something positive rather than negative and hide from it and be ashamed of it.”

Molly, John and the other storytellers are claiming their superpower, freeing themselves and others and helping end the stigma around mental illness.

They strongly believe mental health should be talked about in the same capacity as physical health.

Along with this event, John says he's working with the state bar to educate attorneys and encourage dialogue about mental illness and its prevalence in the field.

The storytelling show is free and will be at Intel Hawthorne Farms Auditorium in Hillsboro next Wednesday, May 29, from 7 to 9 p.m. You can check out details on the ASHA website and RSVP via email at info@myasha.org.

RELATED: 'A sense of calm comes over you': Connecting with horses and nature helps some find mental well-being