Eight protesters were arrested by federal agents on Wednesday near a U.S. Immigration and Customs Enforcement facility in Portland. 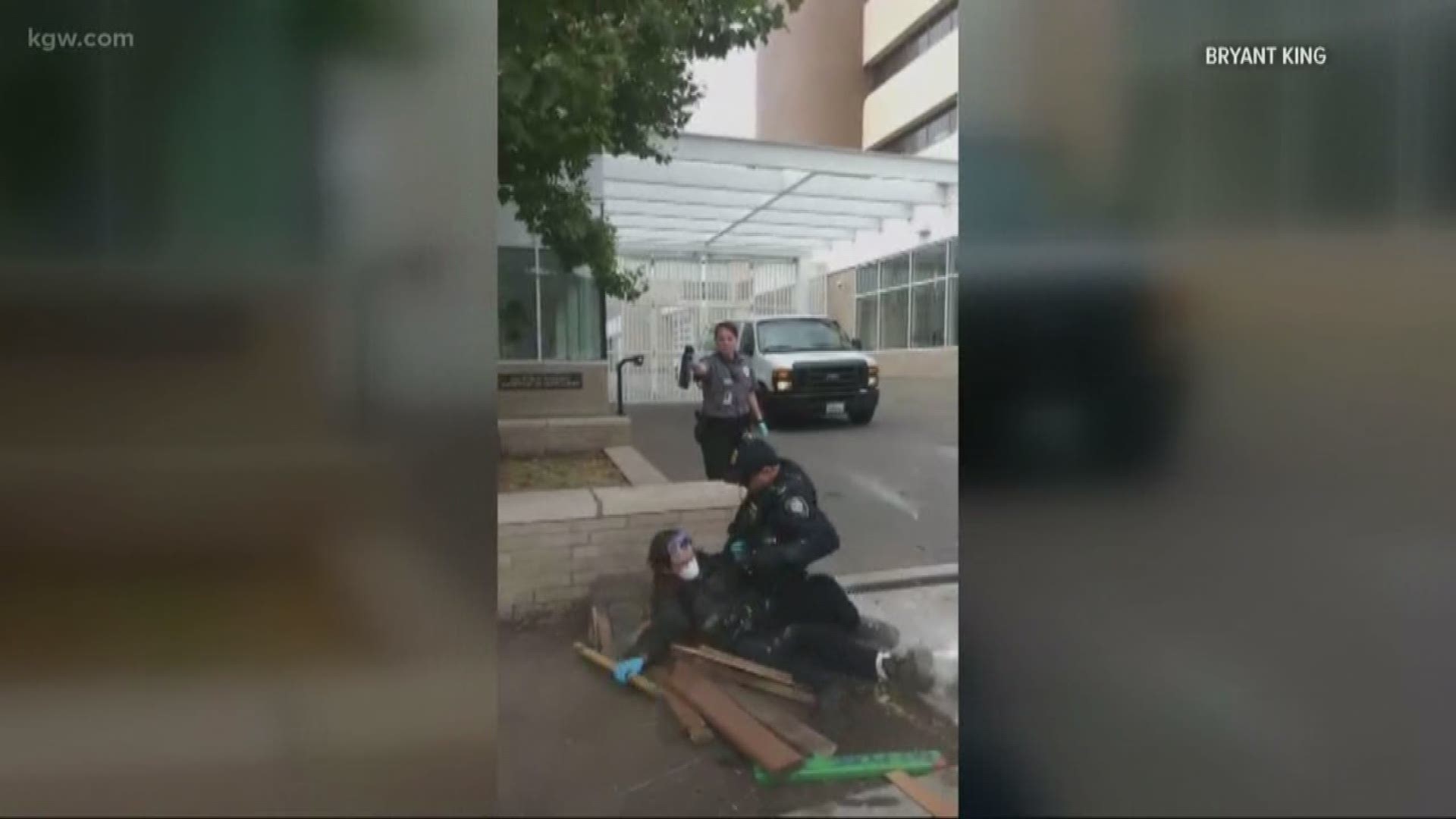 PORTLAND, Ore. – Eight protesters were arrested by federal agents on Wednesday near a U.S. Immigration and Customs Enforcement holding facility in Portland during a violent altercation.

The arrests mark the third time protesters have been arrested since demonstrators first took hold next to the ICE facility on Southwest Macadam Avenue on June 19.

Robert Sperling, a spokesman for the Federal Protective Service, said demonstrators blocked the driveway to the ICE facility, which is illegal.

Sperling said the protesters had agreed not to block the driveway during the demonstration. Occupy ICE PDX denied that claim.

"We do not negotiate with fascists," Occupy ICE PDX said in a statement.

"As FPS officers continued to provide verbal warnings to move from the driveway they had various items thrown at them including an unknown liquid, boards with protruding nails, and other items," Sperling said. "FPS officers proceeded to remove those individuals blocking the drive, ultimately requiring the deployment of pepper ball and pepper spray to keep others back and to protect the arresting officers."

Several videos online show what happened from the protesters' perspectives.

"I had a chance to review this morning's video and I'll be honest it was alarming," said Mayor Ted Wheeler. "The use of force by federal officers looked disproportionate to me, but I don't have all the facts, and I'm going to continue to as I say work with people on all sides of this issue to make sure that we're managing the public safety and that we're providing a space for people to express their first amendment rights in a legal and peaceful way." 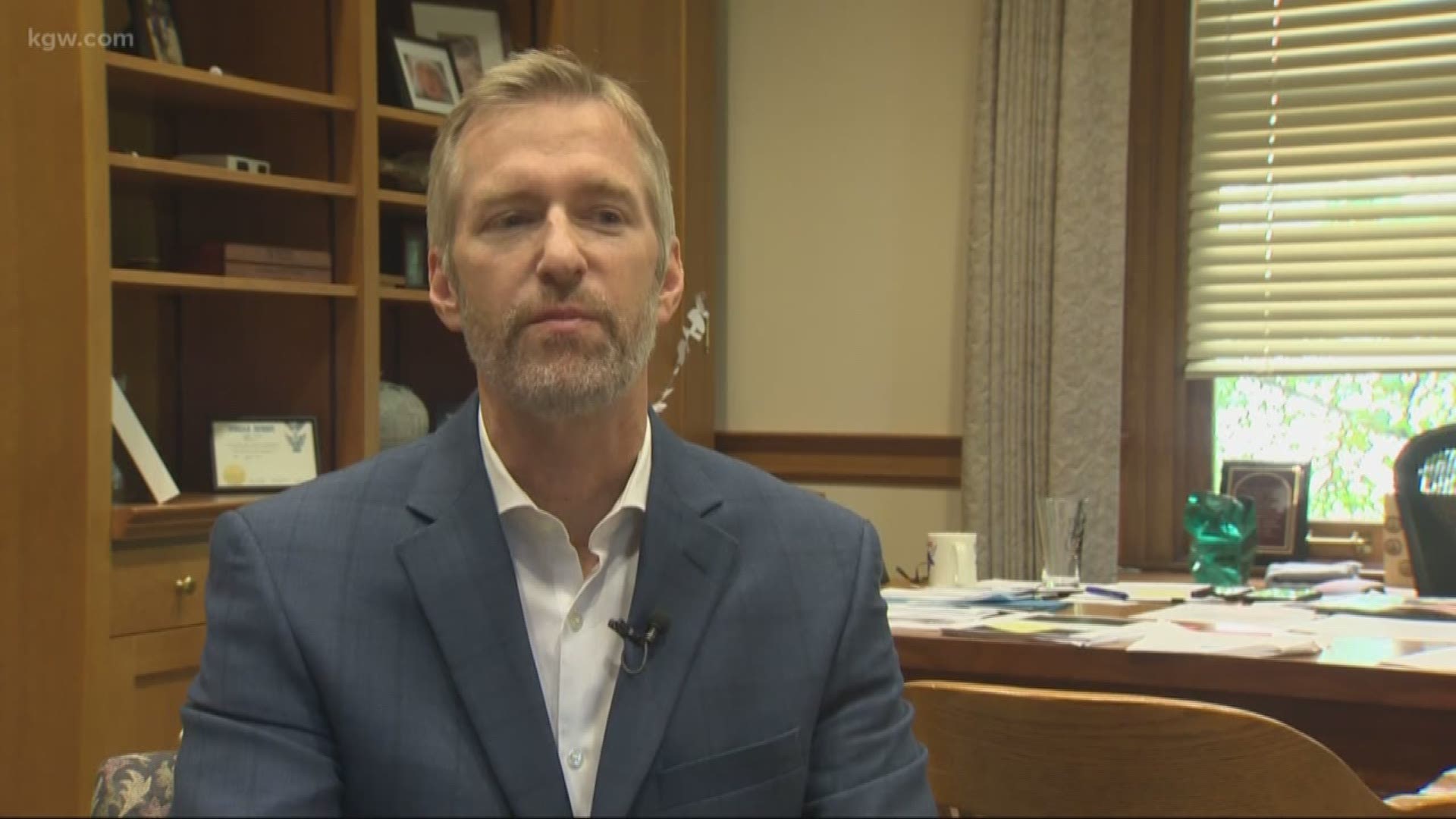 On the KGW App? Tap to view videos

"It's all excessive, this is so brutal," Tanquist said. "I mean, for people peacefully standing with their arms locked to have to suffer from that pepper spray, and if you've ever seen someone hit with that they're screaming -- it's brutal."

A Twitter user posted a video from the beginning of the incident. It shows protesters standing in a line with their arms linked, blocking the ICE facility driveway.

Federal agents move to break the protesters up before more agents rush in and use non-lethal weapons. Several protesters are hit in the body with pepper balls, which are cellulose balls filled with pepper powder.

Another witness posted a Facebook Live video from the incident. The witness runs toward the sound of weapons firing and arrives on an incident already underway.

The video shows Department of Homeland Security agents firing non-lethal weapons at protesters. At one point, an agent jumps on a protester and use a Taser to subdue the person. The scene shows at least five protesters on the ground as federal agents stand over them. Federal agents then tie the protesters’ hands behind their backs.

Another witness posted a video on Twitter that shows the demonstrators linking arms in front of the driveway before officers move in and separate them. Several of the protesters are brought to the ground by officers as other officers fire pepper balls.

The protesters were arrested on charges including obstruction and failure to comply, Sperling said.

"Hopefully we’ll be able to go back and be in a pseudo-calm state and we can all go about our business and they can continue to go about demonstrating on behalf of their cause," he said.

Clem Valor was one of the protesters who was shot with pepper balls and arrested.

"I got shot about 15-plus times in the back and also in other place," Valor said. "I don't believe they should've used any force at all because we were being peaceful."

Occupy ICE PDX protesters have been demonstrating outside of the ICE facility since June 19 with the goal of shutting down the federal immigration agency in Portland and nationwide.