Report: Lillard, Aldridge hope to reunite as teammates in Portland

Jason Quick of The Athletic reports that the former teammates have talked about LaMarcus Aldridge finishing his career in Portland alongside Damian Lillard. 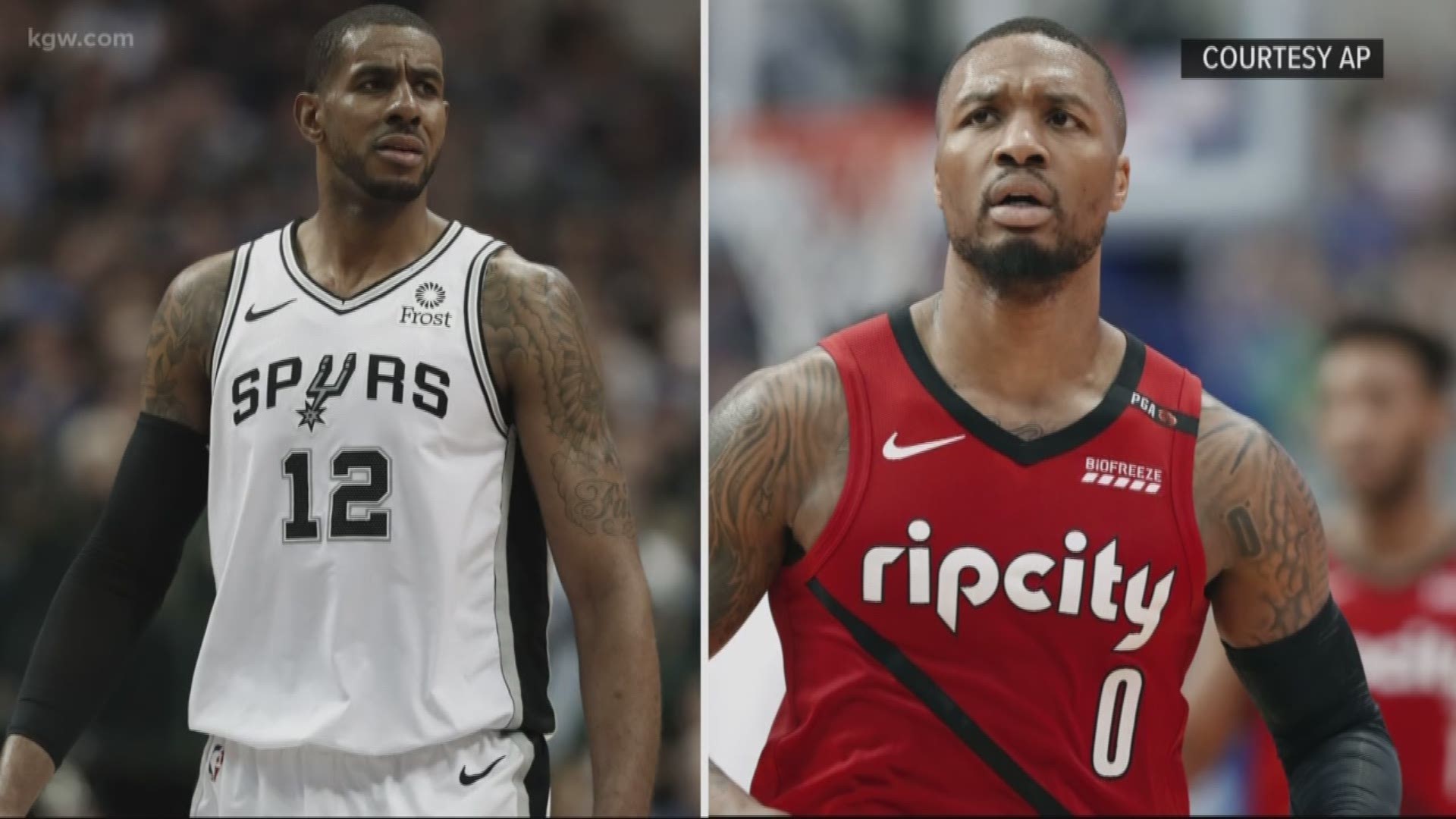 Quick's article recounts how the two turned what was a tense relationship while they were teammates into a genuine friendship in the past couple years. Read the full article here (subscription required).

Aldridge was asked how things might have changed if the two stars had been able to develop a close relationship before Aldridge left in free agency and signed with the San Antonio Spurs after the 2014-15 season.

"Everything happens for a reason," Aldridge told Quick. "He has flourished in that role, and I keep telling him I’m going to come back and finish there. That’s something him and I have talked about — playing together again."

In February, during All-Star weekend in Charlotte, Lillard told Quick that he and Aldridge "interacted on a genuine level," and talked about reuniting in Portland. "Hopefully one day he will come back and finish his career here. I think that would be a great ending for him," Lillard said.

"It felt effortless to be around each other, so we were talking in the locker room, joking about us in the pick-and-roll, and doing it again one day," Aldridge told Quick.

KGW interviewed Quick about the article and he said that Aldridge was as candid as he'd ever been on the topic of his relationship with Lillard. "It shows his growth and maturity," Quick said.

Aldridge is 33 and playing at an elite level in his 13th NBA season. He's been named to the All-Star team seven of the past eight seasons, and this year, he's averaging 21.2 points and 9.0 rebounds per game.

He is owed $26 million next season. Only $7 million of the $24 million on the final year of his contract is guaranteed for the 2020-21 season, the same season Lillard's current contract runs out.

Aldridge could sign with Portland during the 2020 offseason if the Spurs decide to cut ties with Aldridge after next season. That offseason, several large contracts come off the books for Portland. Currently, the Blazers have $91 million in committed salary for the 2020-21 season. The projected salary cap threshold is $118 million that season, which means the Blazers could potentially create enough cap space to sign Aldridge. Even if the Spurs bring him back for the final year of his contract, Aldridge could sign with Portland during the 2021 offseason.

The Blazers could also try to trade for Aldridge this offseason. Mike Richman of NBC Sports Northwest reported Wednesday that the Spurs have shown interest in Trail Blazers forward Maurice Harkless in the past. An offer of Harkless, Meyers Leonard and one of Portland's young players (Zach Collins, Anfernee Simons) and a draft pick could entice the Spurs to consider trading Aldridge back to Portland, especially if he asks for a trade.

If Aldridge does return to Portland, the most likely scenario is not through a trade but as a free agent after his current contract runs out, Quick told KGW.

"Both of them talking about it was more fantasy and philosophical, like, 'How great would that be?'" Quick told KGW. "But one of the big hurdles in making it happen has been eliminated because there's not that tension, and they both want to play with each other."

LISTEN: 3-on-3 Blazers: Jason Quick on Aldridge and Lillard

When Aldridge's contract runs out in San Antonio, he'd be 35 years old. That doesn't mean he couldn't make a meaningful contribution for the Trail Blazers, Quick said.

"He'll be at the end of his career. He'll be a different player than he was when he left Portland. He'd be a complementary piece," Quick said. "It's something I think the Blazers have needed for these last couple years. They haven't really had that veteran presence. ... Two years down the road, if this group is still together and they're still successful, I think LaMarcus on this team would still be an asset. You always need veteran leadership. I think he'll still be skilled. He hasn't had any major injuries. At 35, it's conceivable that he could be, not an impact player, but an important player for a team even at 35 years old."

Would Portland welcome Aldridge back to Portland? Quick thinks they would.

"It was really interesting after I wrote the article to see what the response would be," Quick said. "I would say the majority of the fans were welcoming the idea of LaMarcus returning to Portland. The level of talent he was and could still be, that soothes a lot of hurt feelings. I think he would be welcomed back with open arms, especially with the way Dame is receiving him and wants him here.

"I think it would be a really unique and a really beautiful story if it ever did happen that LaMarcus comes back to Portland," Quick said.

VIDEO: Jason Quick of The Athletic on Aldridge and Lillard