Staff members at Legacy Emanuel's Oregon Burn Center were trained this year on how to apply specialized makeup specifically to burn survivors. 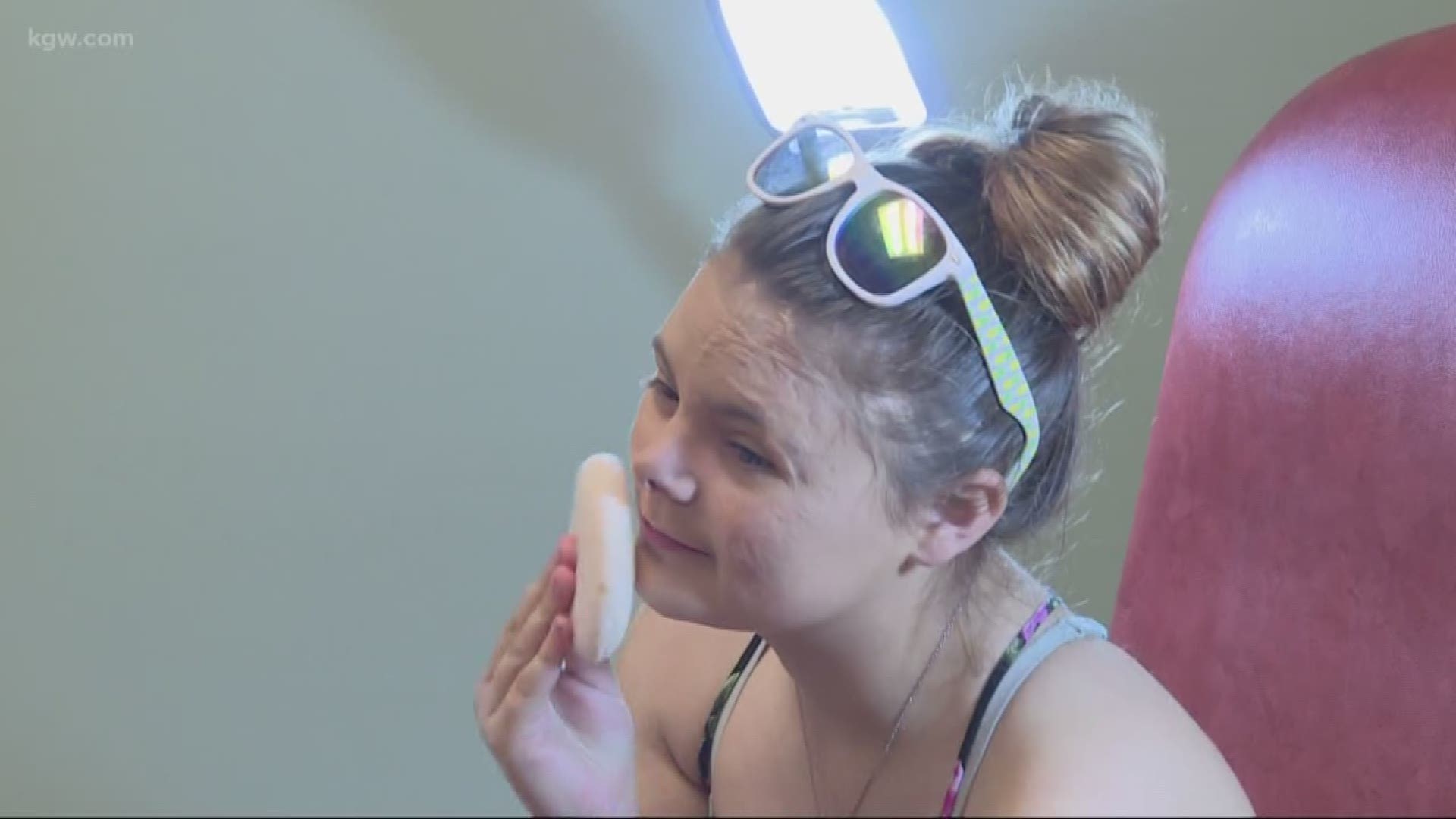 PORTLAND, Ore. — Living with burn scars can be difficult when they're on a highly visible part of your body, but it can be especially hard if you’re a kid growing up with those scars.

But a new offering at Legacy’s Oregon Burn Center in Portland is helping burn victims feel more confident in their own skin.

Just this year, staff members at the Burn Center were trained on how to apply makeup specifically to burn survivors.

Many of them have extensive scarring, but the makeup often has effects that are more than skin deep.

She can’t remember what happened to her, but her mom does. Tabitha Alderson said her daughter, who she calls Lexi, was at a babysitter’s place when she sat in a chemical drain cleaner for 30 minutes, unattended.

"It burned through her skin like acid, third-degree burns to the bone, on her legs [and] her face and arm," Alderson said.

She said she remembers the first time she saw Lexi after the burn.

Credit: Tabitha Alderson
Lexi Barber was 22 months old when she suffered chemical burns. Lexi, who is now 17, has had more than 20 surgeries since.

Life hasn't been a cakewalk for Lexi, who is now 17 and has more than 20 surgeries under her belt.

The bullies she's had to deal with throughout her life have been brutal with the name calling. Some have called her names like "scar face."

She said the worst of her burns are on her legs.

"I still struggle with showing my legs in public due to the fact of rude comments, or staring, or pointing," she said. "It taught me a lesson to be stronger, I guess."

What's helped give her strength is a strong base comprised of her family, and her second family at Legacy's Oregon Burn Center.

"I just kind of grew up in this center. I don't really have much. All the nurses know me," she said.

This week, she went back for something new. Lexi was getting her makeup done.

But it's not just any makeup. It's heavy duty stuff formulated for professional actors and burn survivors. It’s creamier, with more buildable coverage.

"With scarring, you can get varied textures and varied pigmentation changes," said Michelle Kinnan, the occupational therapist applying Lexi's makeup.

Kinnan said she and other staff members were trained up on how to apply makeup to burn survivors earlier this year. She said her role is to find the proper colors and shades of makeup and show the burn survivor how best to apply the makeup. The goal is to help the burn survivor do it on their own.

"It is applying makeup, but it's also looking at how we can make a person feel better in their skin," said Kinnan.

Lexi, and others who choose to participate, get to take the makeup home with them, along with the knowledge on how to do it herself.

At the end of the appointment, Alderson, who had been watching the entire time, thought Lexi was still as beautiful as before.

"She looks really good. If she's happy with herself, I'm good," she said.

Credit: Tabitha Alderson
Lexi Barber sits in the chair at Legacy Emanuel Medical Center's Oregon Burn Center after getting her makeup done. "It gives more confidence for burn survivors so they don't think of themselves as not pretty or ugly," Lexi said.

"It gives more confidence for burn survivors so they don’t think of themselves as not pretty or ugly," Lexi said.

The love and support she’s been shown at the Oregon Burn Center has rubbed off on her. The girl's got heart, and she wants to give back. Lexi wants to become a registered nurse, and work at the Burn Center.

"Just because you're burned, doesn't mean you can't do what everyone else does, because you can. Sometimes I think you can do more," Alderson said.

The woman who started the Image Enhancement Program, Barbara Quayle, flew from California to the Oregon Burn Center to personally train the staff.

She is a burn survivor herself, after her face was severely burned in a car crash about 40 years ago.

"It left me without an even skin tone, no eyebrows, I lost my eyebrows and not a symmetrical lip line, all three of which most women walking around have. So I wanted those too," Quayle said.

Over time, she began working with a makeup artist in the Los Angeles area and developed techniques and skills related to makeup application. She now teaches those skills to burn survivors and healthcare professionals.

Her Image Enhancement Program is part of the Phoenix Society for Burn Survivors, a non-profit organization dedicated to supporting people dealing with burns. Quayle said there's an online learning program where people can access step-by-step tutorials on how to apply makeup for free. The idea is to give people more comfort and confidence in public.

"They can avoid a lot of stares, a lot of questions, and it makes it so much easier when people go out in public and they have more confidence," Quayle said. "They feel more at ease because they draw less attention to themselves."

Legacy Health is able to offer programs like this thanks to a grant. The same grant also helps send kids who are burn survivors to a camp with other kids who are struggling with the same issues.