A new poll shows Brown with a slight lead over Buehler, 49 to 45 percent, with other candidates dividing up the remainder. 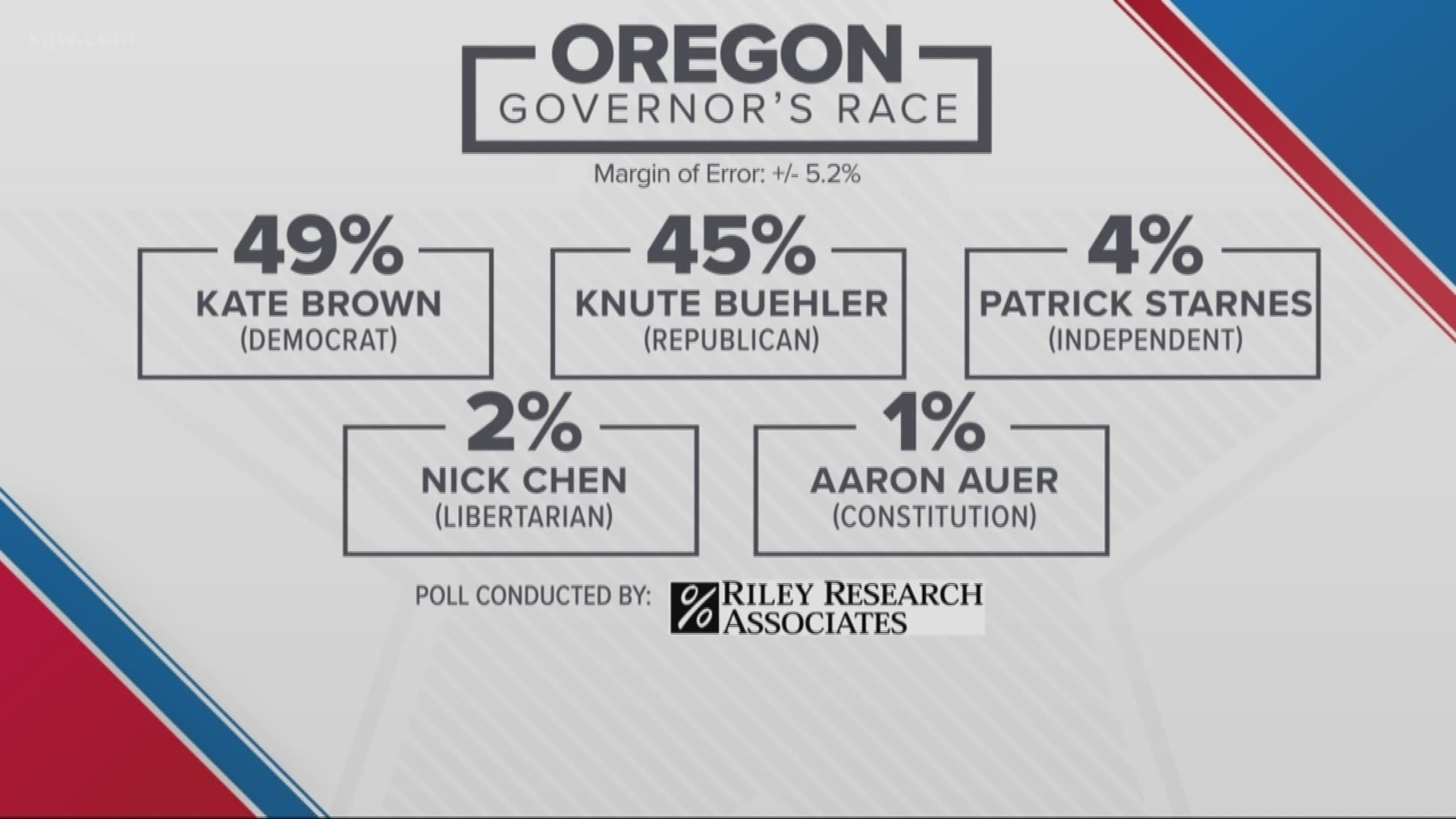 PORTLAND, Ore. — With one week to go before ballots get sent to most Oregon voters, the governor’s race appears to be a close contest between Democratic incumbent Gov. Kate Brown and her challenger, Republican lawmaker Knute Buehler.

A new poll shows Brown with a slight lead over Buehler, 49 to 45 percent, with other candidates dividing up the remainder. The poll was conducted between Sept. 24 and Oct. 7 by Riley Research Associates for KGW Media Group and The Oregonian/OregonLive.

The two Portland media organizations sponsored a debate between the two gubernatorial candidates on Tuesday, Oct. 9, at KGW’s studios.

KGW political analyst Len Bergstein said the closeness of the polls highlights the importance of each joint appearance.

“The stakes seem pretty high for this debate. If [Buehler] he’s going to make a move, this is the night he has to do it,” said Bergstein.

“Polls at this point reflect a lot of churn by the voters. Some people are coming to the race right now so there’s a lot of movement,” he said.

The poll, which was answered by nearly 400 likely voters, also addressed the statewide measures that will be on the November ballot. There is a margin of error of approximately +/- 5 percent.

KGW and The Oregonian/OregonLive had requested a larger sample of likely voters than Riley Research Associates was able to achieve.

Among the respondents, 40 percent had a favorable rating of President Donald Trump and 60 percent viewed him unfavorably. For Republicans and Democrats, the perspective was sharp along party lines with 95 percent of Democrats viewing the President unfavorably compared to just 11 percent of Republicans. Among independent voters, the split was 47 percent positive to 53 percent unfavorable.

The poll was divided 50-50 on those who think Oregon is “generally on the right track” as opposed to those who felt the state is “going in the wrong direction.” A total of 78 percent of Democrats felt positive on this question, compared to 19 percent of Republicans.

The poll found that women voters were more likely to believe Oregon is on the right track (58 percent of women compared to 44 percent of men). About 70 percent of polltakers from Central Oregon said they felt that the state is on the wrong track.

Two measures were virtual ties, the survey found. Measure 103, which would ban any new grocery store taxes, would also block local governments from taxing soda or sugar beverages. Measure 104 would expand the current requirement that a three-fifths majority of the legislature is needed to approve bills that raise money. As of now, that requirement only applies to tax-related laws.

Two measures – 105, repealing Oregon’s sanctuary state law that limits how local law enforcement cooperates with federal immigration authorities, and 106, blocking public funding for abortion except when medically necessary – were trailing in the poll. For Measure 105, 51 percent of respondents were opposed, while 56 percent were in opposition for Measure 106.

“Those campaigns should be pretty happy at this point,” said Bergstein, of the efforts to defeat both measures.

Only one state measure was supported by a clear majority of polltakers – Measure 102, which would allow local governments to fund affordable housing bonds by working with private entities. Portland city leaders have been advocating for this change to encourage more low-income housing development.

Brown, who was elevated into the governor’s seat in early 2015 after the resignation of then-Governor John Kitzhaber, was elected to fill the remainder of his term in November 2016. This election is for her first full four-year term.

Buehler, a physician, has represented the Bend area in the Oregon House of Representatives since 2015. Buehler ran against Brown for secretary of state in 2012, a race Brown ended up winning.

Both campaigns have spent heavily on advertising over the past several months, as have outside advocacy groups in support of either candidate.

The poll found Brown with strong support in the Portland metropolitan area, while Buehler was heavily preferred in central Oregon.

Patrick Starnes, representing the Independent Party of Oregon, received 4 percent of the support in the gubernatorial poll, followed by 2 percent for Libertarian candidate Nick Chen and 1 percent for Aaron Auer of the Constitution Party.