What will misinformation look like on and after Election Day? WSU-Vancouver expert explains

Digital literacy expert Mike Caulfield shares predictions of misinformation and tips for how to respond during the coming election.

PORTLAND, Ore. — With the COVID-19 pandemic and widespread mail-in voting, the 2020 election will be unprecedented in many ways. This has created opportunities for disinformers to diminish trust in the electoral system, affecting both sides of the political spectrum.

What kinds of misinformation can we expect on and after election day, and how can we prepare for this? To find answers, KGW spoke to Mike Caulfield, director of blended and networked learning at Washington State University Vancouver, who recently co-authored a report on uncertainties and misinformation in the upcoming election.

It's a whole spectrum of individuals. For example on social media, that are highly networked groups of people that may be a part of a certain political alignment — it could be right and it could be left — who just retweet and push out things constantly, likely knowing that a lot of that is not verified. If it stays in those networks, it really doesn't do that much social damage.

It's the fact that those networks are connected, they overlap with other networks. For example, politicians are connected on the edges of these networks and they see this stuff and maybe they believe it and maybe they promote it. Various reporters see certain narratives developing and they may decide to cover both sides of that narrative, but they might actually amplify that narrative.

We see purported evidence of voter fraud, but these events are extremely rare. What’s an example of one of these events, and how can that get blown out of proportion?

Recently someone lit the inside of a ballot box in Boston on fire, and a certain number of ballots were destroyed. The majority of ballots were actually salvaged, and some people are going to have to resubmit their ballots. That's a really engaging event that has a lot of lift on social media. But if you take all the events — I think there's been two of this sort of action on ballot boxes — you're talking about a couple hundred votes out of, you know how many tens of millions of votes.

So we can gravitate towards these events and it really creates a skew that can be problematic. Same thing with voting irregularities. There will be ballots that are lost. They'll be things that are misplaced. They'll be numbers that don't quite add up. It'll take some time to figure out why those don't add up. If we don't have the context around that and we don't get that early, it leaves the field open to a lot of people who don't necessarily have your best interest at heart.

If the public sees this kind of evidence of voting fraud or suppression, what should they do?

The people that want to frame these stories in a deceptive way will often choose the article with the most inflammatory headline or the least amount of nuanced information. So one thing that you can do when you are seeing this stuff online is forget the article that has been shared with you, and go out and do a news search and try to find the best coverage you can on the issue. And if you find better coverage that has more nuance in it, first of all, inform yourself.

Secondly consider just adding the article as a link below wherever you found the initial sort of inflammatory story. What you're looking to do when you see that misinformation online is make it easier for people like you, so they can very quickly get that context. It's not going to convince the diehards. It's certainly not going to convince people that are knowingly spreading disinformation, but those groups of people are working actively to persuade a group of people in the middle that are really concerned about truth and context, and by providing a link, you can provide that context and help other people come to their own conclusion.

In your report, you talk about how on election day “armchair pollsters'' or partisan media outlets may try to announce results before they're finalized. How should the public respond to that and where should they go to find credible election results?

Then I guess, the more general piece of advice is, as much as it hurts, try to be patient. If it really is the case where we're looking at a number of states beginning a longer counting process, anybody who's saying they're sure of the results at this point is probably not the person you should be listening to. You have journalists who are trying to get an accurate story and then you have disinformers who can kind of just invent stuff. They're first on the scene right, while the journalists are still getting their shoes on.

When you're actually looking at trying to figure out who to pay attention to figure out whose reputation suffers if they get it wrong. Look to those people rather than the people that don't really pay a penalty for getting something wrong or right. 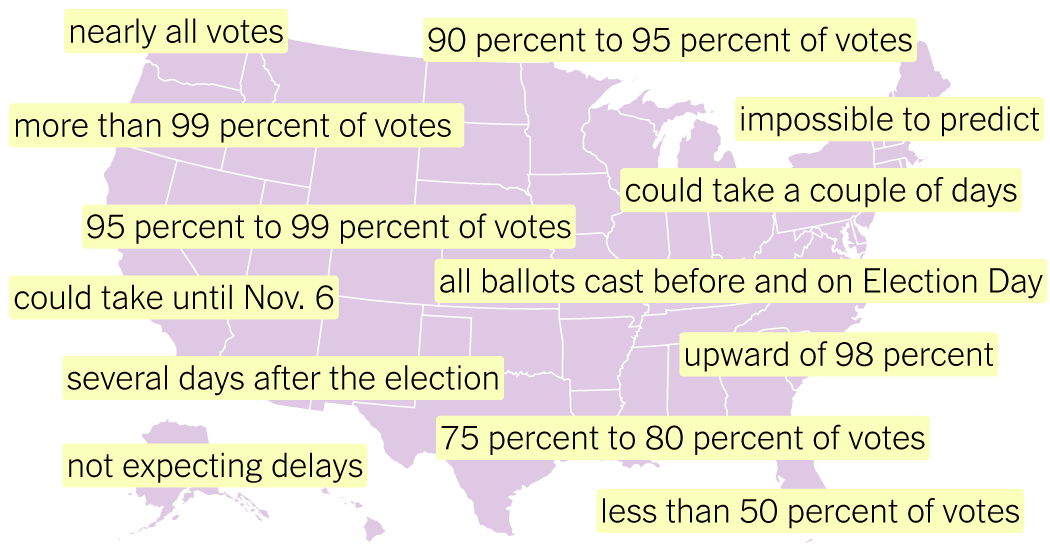 How Long Will Vote Counting Take? Estimates and Deadlines in All 50 States
Although many winners may quickly be evident on election night, the increase in mail voting because of the pandemic is expected to push back the release of full results in many key states. The New York Times asked officials in every state and the District of Columbia about their reporting processes and what share of votes they expect to be counted by noon on Wednesday, Nov.

Where do foreign actors come into this field of misinformation?

There's no evidence right now that any foreign power is going to get into voting systems and change votes. What we're worried about though is if a foreign entity could get in and demonstrate their capability to change elements of the system, that could create just as many problems because now you will have a public who's trying to understand whether they can trust the voting totals or not. And they're trying to do that in an environment where assertions without evidence are sort of propagating across the social media space.

If there was an intrusion into voting systems, it would take quite a bit of time for experts to figure out what was actually compromised. So you get into that problem where conspicuous intrusion could create a feeling among the public — and this could be among the left and among the right — that the vote cannot be trusted at all, and in the interim between the question being raised and answer being known, there could just be a lot of sort of bad behavior in there. So, I am actually more worried about the domestic side right now.

How do you think this will all play out in Oregon and Washington? What kinds of misinformation will we be seeing and how should we react to this?

We're very lucky in that many other states are of course approaching mail-in and absentee voting for the first time, and people don't know how it's supposed to work. Those are opportunities for misinformation and disinformation. So, we're really lucky that we live in these two states that have practiced mail-in voting for so long. I think most of the mess is going to be national. Now, that said, if there's a national mess and depending on which way those results lean, people are upset about that or feel that it's an invalid result, then you start to see Washington State and Oregon effects.

We could see protests that are actually peaceful, but then we can see a lot of disinformation presenting those protests as violent. We look at Seattle. We look at Portland. There is a history here of people utilizing the right of protest, and there's also a history of people infiltrating those groups and trying to push them towards more violent action.

I think some people are going to be heartbroken after this election, no matter how it turns out. And some people are going to see injustice after this election. And they might be right. It's appropriate to share when you see injustice. But just consider that there are often unforeseen side effects to sharing the most inflammatory version of events. I just want people to realize that there can be downstream effects.

Editor's note: The above answers were edited for length and clarity.

Video shows Clackamas County Clerk was in office when Schrader staffer was let in early, despite her claims otherwise