Walkout is over: Oregon GOP senators return to Capitol, cap-and-trade bill sent back to committee

Nine of the 12 minority Republicans returned after Democrats said they lacked the votes to pass the legislation aimed at countering climate change. 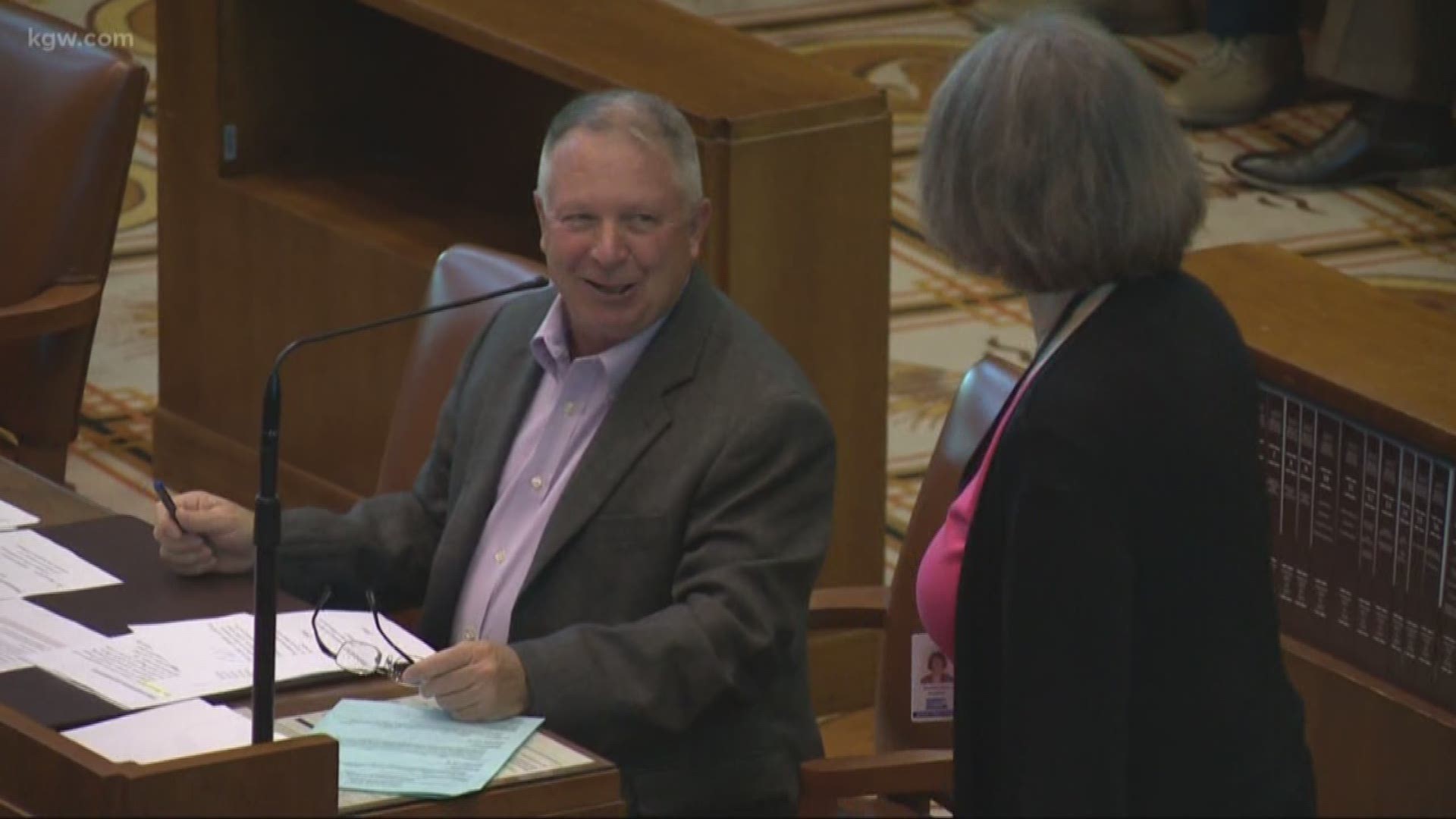 SALEM, Ore. -- Some Republican lawmakers returned to the Oregon Senate on Saturday, ending a walkout over a carbon-emissions bill they said would harm their rural constituents.

Nine of the 12 minority Republicans returned after Senate President Peter Courtney said the majority Democrats lacked the votes to pass the legislation aimed at countering climate change. The House had previously passed the bill, one of the centerpieces of Oregon's 2019 legislative session, which is scheduled to end on Sunday.

Democrats have an 18 to 12 majority in the Senate but need at least 20 members — and therefore at least two Republicans — to vote on legislation.

Democrats had said the climate legislation was critical to make Oregon a leader in the fight against climate change and will ultimately create jobs and transform the economy. They made dozens of concessions to respond to concerns from conservatives and industry leaders, but they didn't go as far as Republicans hoped.

The GOP senator walkout began June 20. Many left the state after Gov. Kate Brown ordered the state police to bring them to the Capitol.

"Our mission in walking out was to kill cap and trade," Senate Minority Leader Herman Baertschiger told reporters Friday. "And that's what we did."

The bill, if passed, would have been the second in the nation to cap and trade pollution credits among companies. It aimed to dramatically reduce greenhouse gases by 2050 by capping carbon emissions and requiring businesses to buy or trade for an ever-dwindling pool of pollution "allowances." California has a similar program.

Baertschiger said he received assurances from the Democratic Senate president and the governor that the climate bill won't move forward this session.

One of the first acts of Saturday's session was sending the cap-and-trade bill back to committee.

More than 100 bills remain to be addressed. Baertschiger said he's confident the Senate can work through dozens of measures before the legislative session ends.

Democratic Sen. Elizabeth Steiner Hayward, who chairs the committee in charge of funding decisions, said she felt "relief" that Republicans agreed to return to get through the rest of the legislative agenda, including added funding for critical services such as child welfare and public safety.

More: Paid leave, money for housing just a few of the bills that still need to be passed

Steiner Hayward said a climate change bill will likely come up again in the future.

"Nobody's giving up," she said.

Brown could call a special session to handle outstanding bills.

Democrats have a supermajority in both the House and Senate, enabling them to pass bills -- including ones to raise revenue -- if they vote as a bloc. But if Republicans stay away, the Democrats lack a quorum to convene.

The Republicans wielded power disproportionate to their numbers this session. They walked out of the Senate last month to block a school funding tax package. They returned only after Brown brokered a deal in which Democrats dropped legislation on gun control and children's vaccination requirements, upsetting backers of those measures and leaving gun-control proponents and those concerned about disease outbreaks feeling betrayed. The Senate, with a quorum established, passed the school funding measure.

In the House, Republicans in May forced a clerk in the Oregon Legislature to read aloud every word in nearly every piece of legislation, giving granular details about farm loans, motor vehicle taxes and other government minutiae as the minority party used the stalling tactic.

"This is not how our democracy is supposed to work," said Tara Hurst, executive director of the lobbying group Renew Oregon, which helped craft the climate proposal. "Continuing to capitulate to demands of a small minority, which has taken our Legislature hostage, will only lead to more of the same because there are no consequences."

Rep. Rachel Prusak, a freshman Democrat from a Portland suburb, said she is "heartbroken over the state of our Legislature."