As he so often does, Trump turned the rally meant for a fellow Republican into a venue to air his own grievances against a litany of familiar foes. 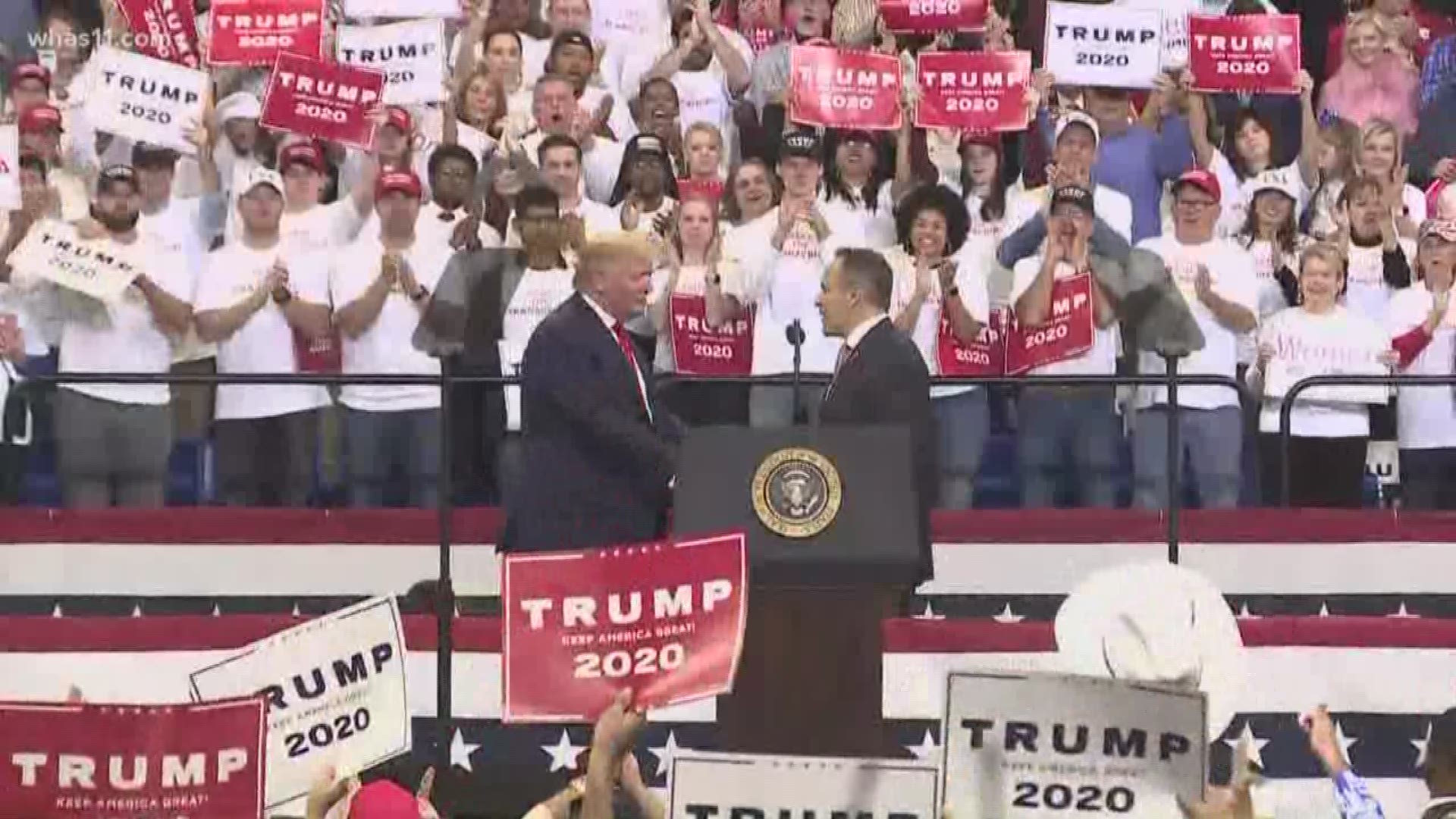 LEXINGTON, Ky. — (AP) — Pushing to help a Republican governor hold onto his office, President Donald Trump barnstormed for Gov. Matt Bevin of Kentucky on Monday, delivering a raucous election eve rally in which he delivered a series of stinging attacks on Democrats and the impeachment inquiry that is imperiling his presidency.

The campaign finale at Rupp Arena in Lexington reinforced one of Bevin's main themes throughout his bitter, closely fought reelection campaign — his alliance with Trump, whose popularity eclipses the governor's in the Bluegrass State. Trump praised Bevin and linked the governor's contest against Democrat Andy Beshear, the state's attorney general, with his own battle against possible impeachment, saying a victory in Kentucky would signal the rise of "an angry majority that will vote the do-nothing Democrats the hell out of office."

"Beshear doesn't represent you, he represents the Washington swamp and represents the same people who are trying to overthrow the last election," declared Trump, before adding of Bevin, "He's such a pain in the ass, but that's what you want."

If Bevin loses, Trump said, "they will say Trump suffered the greatest defeat ever. You can't let that happen to me!"

As he so often does, Trump turned the rally meant for a fellow Republican into a venue to air his own grievances against a litany of familiar foes, including the news media and the House Democrats who voted last week to open an impeachment inquiry into the president's push for Ukraine to investigate one of his political foes, former Vice President Joe Biden.

"With last week's vote, the Democrats have declared war on democracy itself," Trump declared. "In their crazed thirst for power, the Democrats are trying to tear our country apart."

The impeachment inquiry also loomed large for many in the packed arena: A few dozen supporters seated directly behind the president wore matching "Read the transcript" t-shirts, echoing Trump's claim that the memo released by the White House of his call with Ukrainian President Volodymir Zelenskiy showed he did nothing wrong.

Democrats believe the memo shows evidence of a quid pro quo in which Trump offered military aid to Ukraine in exchange for the probe into Biden and his family.

The challenger stuck to his themes of improving public schools, creating better-paying jobs and protecting health care and public pensions. Beshear planned to finish the day with an evening rally in Louisville, a Democratic stronghold where he needs a big turnout.

"People try to distract us with national issues and get us thinking about things other than our well-being," Beshear said in a Monday radio interview on WKDZ. "Our families should be doing so much better. And I'm going to make sure they do."

The bitter Kentucky contest is being watched closely for early signs of how the increasingly partisan impeachment furor in Washington might affect Trump and other Republican incumbents in 2020. Among those with an especially keen interest: Senate Majority Leader Mitch McConnell, who's on the ballot himself next year in Kentucky.

McConnell briefly addressed the rally crowd, but his Senate colleague, fellow Republican Rand Paul, tore into the investigation and demanded that Biden's son Hunter, who worked for a Ukrainian gas company, be subpoenaed. And he called for the public identification and subpoena of the anonymous whistleblower who first expressed concern about Trump's call with Zelenskiy. U.S. whistleblower laws exist to protect the identities and careers of people who bring forward accusations of wrongdoing by government officials.

Bevin has repeatedly tried to link himself to Trump's popularity among Kentuckians in ads, tweets and speeches throughout the campaign. It was part of his strategy to nationalize the race and rev up his conservative base. The governor called for a crackdown on illegal immigration and a ban on "sanctuary cities." He denounced the impeachment probe. And he touted his opposition to abortion and support for gun rights.

The election will settle a grudge match between Bevin and Beshear that spanned their terms in office. Wielding his authority as the state's top lawyer, Beshear filed a series of lawsuits challenging Bevin's executive actions to make wholesale changes to boards and commissions and sought to block Bevin-backed pension and education initiatives. In the highest-profile case, a Beshear lawsuit led Kentucky's Supreme Court to strike down a Bevin-supported pension law on procedural grounds last year. 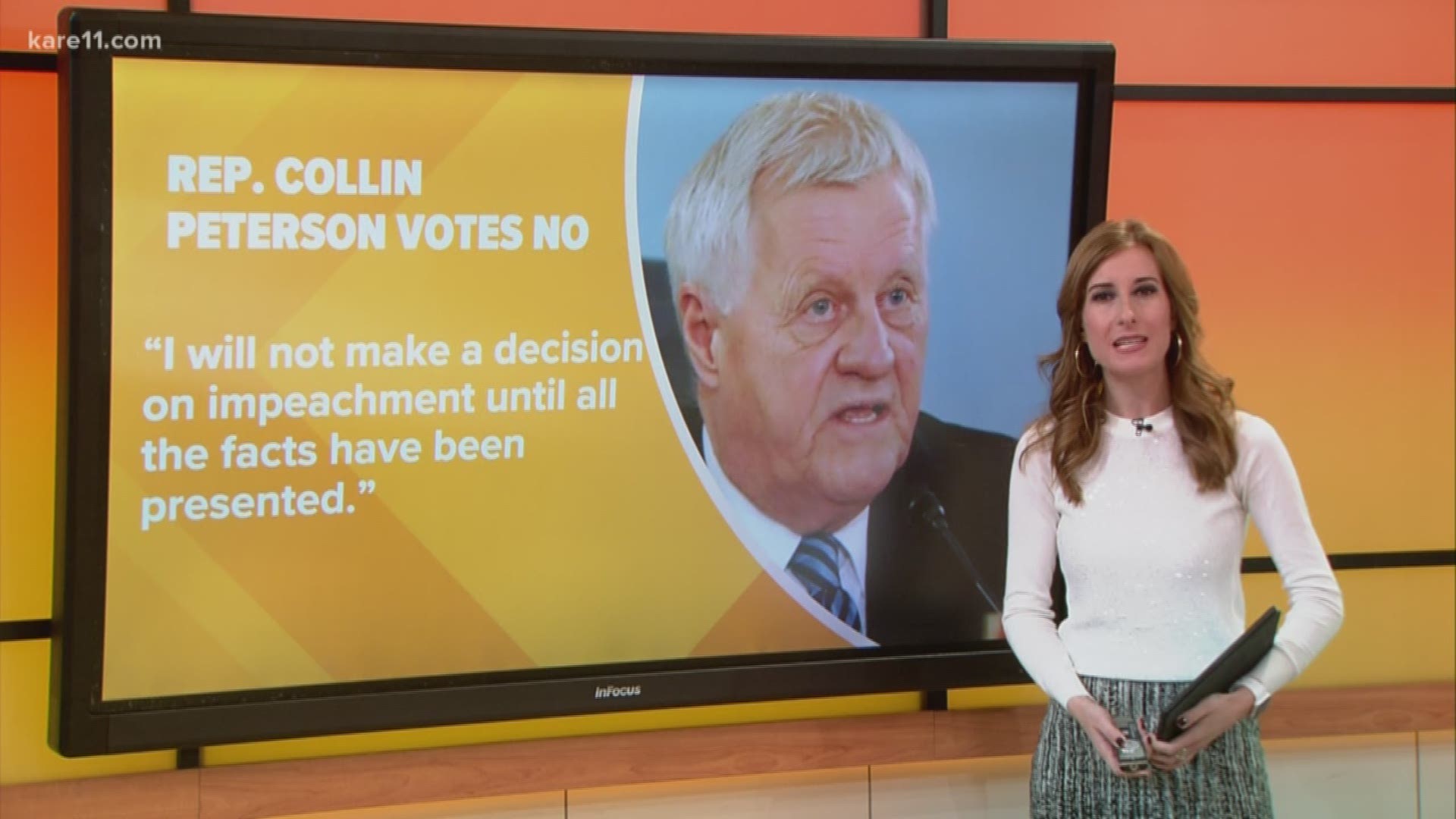 More political coverage, including the impeachment inquiry, on 13 ON YOUR SIDE: