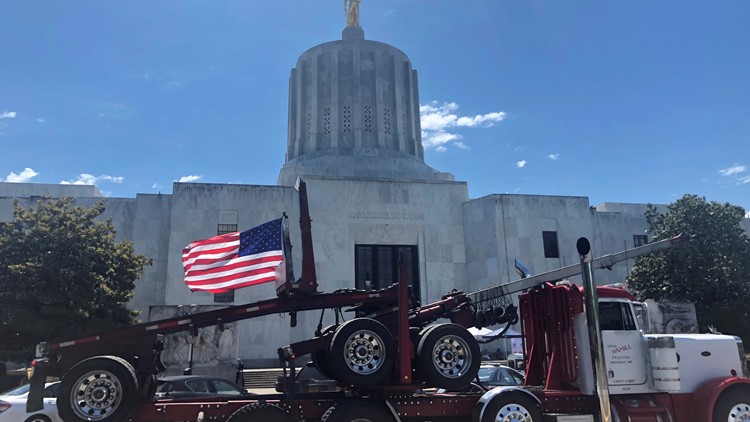 Photo by: AP
A heavy-duty truck drives around the Oregon state Capitol during a protest Wednesday, Jun 12, 2019, in Salem, Ore. Dozens of industrial trucks ran laps around the statehouse as part of a protest against two proposed climate bills that truckers say will put them out of business. (AP Photo/Sarah Zimmerman)

SALEM, Ore. — Dozens of industrial trucks drove laps around the state Capitol Wednesday, blaring their horns and releasing plumes of diesel into the air as part of a demonstration against Oregon's climate policies that loggers and truckers say will devastate their business.

It comes as a key legislative panel approved a cap-and-trade program to reduce greenhouse gas emissions, setting up the ambitious climate proposal for a full floor vote. The bill, along with another addressing diesel emissions from heavy-duty trucks, are meant to reduce the emissions behind global warming and stem the tide of climate change.

Some employers have welcomed the changes, saying cap and trade has been carefully negotiated for over a decade and will actually bring new, high-paying jobs to some of the most remote parts of Oregon.

"This actually opens the door to an incredible amount of high paying jobs," said Matt Swanson with the Northwest Carpenters Union, which represents carpenters and construction workers. "As we transition to cleaner technology, we will need more construction workers on the ground, including in rural areas, to build new infrastructure."

The program sets aside $10 million every two years for investments in transitioning displaced workers to clean energy jobs, providing unemployment benefits plus career and technical training. There are also wage and labor standards built in to ensure these new jobs offer fair pay and other worker benefits.

But truckers and loggers say that there's no reason for the state to move forward with such an ambitious climate platform since Oregon's emissions make up far less than one percent of the global problem. Workers add that such emissions changes would put them out of business, raising fuel and equipment costs.

"It's the height of conceit and arrogance to say that we are responsible for this issue or that we could even do anything to fix it," said Gregg Budge, who owns his own trucking company in Vernonia, northwest of Portland. "If their concept of climate change is a real thing, Oregon is such a minuscule part of this world that this legislation would do nothing."

Under a cap-and-trade program, the state puts an overall limit on emissions and auctions off pollution permits or "allowances" for each ton of carbon industries plan to emit. Only the largest polluters are targeted, and the idea is that as the emissions limit becomes stricter over time, it will be in industries' financial interest to switch to green technology. The state ultimately aims to reduce emissions to 80% below 1990 levels by 2050.

The change is expected to raise gas prices by about 22 cents a gallon for the first year, with gas rising above $3 dollars a gallon by 2050, according to the Legislative Revenue Office. Some of those costs would be returned to low-income drivers under a fuel rebate program written into the bill.

The trucking industry is also likely to experience a reduction in tax rates, which state economists say will lower some of the financial impacts of the program.

But truckers maintain that even with those caveats, the proposals only showcase how little lawmakers understand industry in rural Oregon. Truckers have to buy their own trucks and in many cases aren't reimbursed by employers for the price of fuel.

They say that they're being punished double by lawmakers: cap and trade would raise fuel prices, while a proposed clean diesel bill would require some truckers to buy new engines or vehicles--upgrades that can cost hundreds of thousands of dollars.

The diesel measure aims to phase out diesel engines produced before 2007, and the proposal only applies Multnomah, Washington and Clackamas counties, which are primarily urban areas.

Senate President Peter Courtney addressed a crowd of protesters outside the Capitol, acknowledging their frustrations with the proposals.

"I see you glaring at me and I get that," he told a crowd, adding that he wouldn't "celebrate" the passage of either proposal.

RELATED: Who is Kelsey Juliana? Meet the woman whose name is on the federal climate change lawsuit