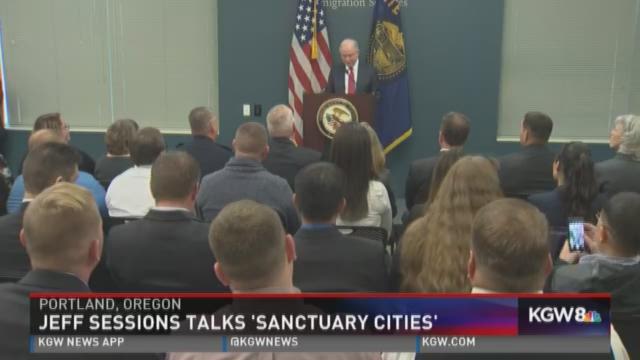 “Our community is safer when all people feel confident about going to local law enforcement when they need help,” Reese said in the first of a nine-tweet response.

In December, commissioners voted to designate Multnomah County a sanctuary county. Portland has also declared itself a sanctuary city.

During his Tuesday speech, Sessions argued that in order to reduce violent crime in America, cities like Portland must drop sanctuary policies.

Reese responded by saying, “We need all Mult Co residents, no matter their immigration status, to feel confident going to law enforcement w/o worry of deportation.”

“Local law enforcement should be focused on building trust within the community, not doing the job of federal immigration enforcement,” Reese said.

Later in his series of tweets, Reese said he agreed with last week’s federal judge’s ruling that blocked the Trump administration’s effort to withhold federal funds for public safety from sanctuary cities.

“Once trust is lost, it cannot be easily repaired,” he said.

Furthermore, Reese argued if the Trump administration “wants to make controversial and dangerous changes to immigration enforcement” they should work with Congress as opposed to local law enforcement agencies.

After his tweets, Reese met with Sessions and said the attorney general "refused to acknowledge the 2014 federal court decision barring Oregon sheriffs from holding adults in custody based solely on ICE detainers."

"There are legal ways for federal, state, and local law enforcement to cooperate to help keep our communities safe and I support those efforts," Reese said in a statement after the meeting.

Sessions brought up the topic of ICE detainers during his speech when he referred to the case of Sergio Martinez, who was accused of attacking two women in Portland last July. Martinez, a transient, had previously been deported from the U.S. 20 times, according to court records.

"Federal immigration authorities properly lodged a detainer against Martinez just a few months before, asking to be notified when he was set to be released. But authorities in Oregon refused," said Sessions.

In July, Reese said the sheriff's office couldn't hold Martinez any longer because ICE processed a civil detainer and not a criminal warrant signed by a judge, "which they know cannot be legally used in Oregon," Reese said. The sheriff's office followed state statute and federal case law in handling the suspect, Reese said, but had to release him "consistent with the orders of the court."