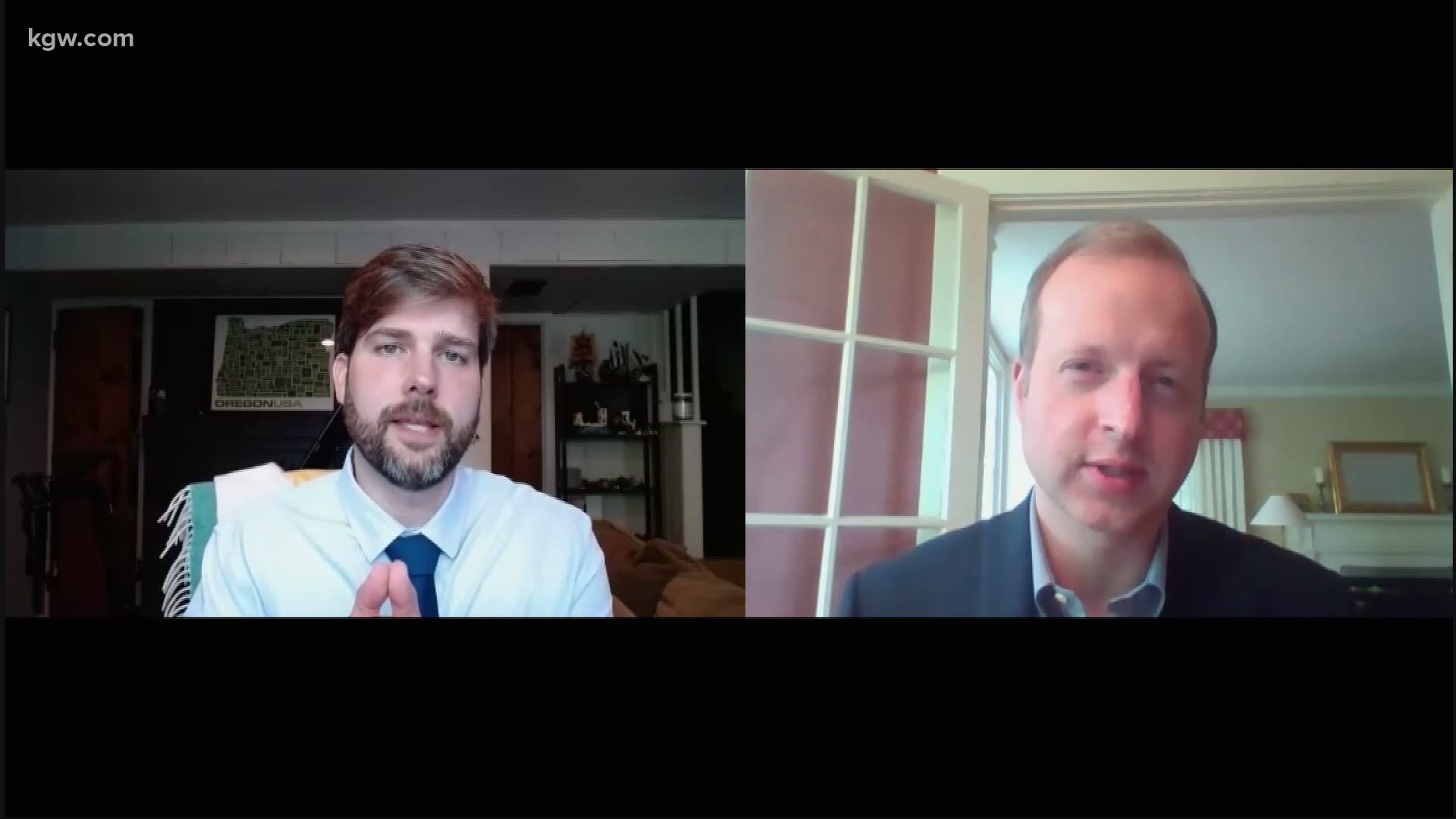 PORTLAND, Ore — With less than a week left until Oregon’s May primary election, one of the biggest races in the Portland metro area is the Multnomah County District Attorney’s race.

After 30 years in the prosecutor’s office and seven years in the lead role, current DA Rod Underhill is stepping down at the end of 2020.

Reporters have dubbed Schmidt the “reform” candidate, an assessment he finds accurate.

“I believe we need major reform in our criminal justice system,” he said in an interview Tuesday. “When you look at the fact that our director of corrections and even our county sheriff have said over and over that our jails and prisons are our largest homeless shelters, our largest drug and alcohol treatment facilities, our largest mental health treatment facilities … it starts to really become evident that we need to do something different.”

Knight, on the other hand, doesn’t shy away from “establishment” label he’s been assigned in the past, but he finds it too one-dimensional.

“I'm absolutely the establishment candidate if that means the candidate with the most support from first-responders, the most support from the legal community and from folks who've done this work,” Knight said. “Now, having said all that, there are certainly aspects of what is generally been described as the reform movement that I'm supportive of.”

The power of the job

Before we dive into each candidate’s key platforms, it’s worth noting both are pushing for some level of reform in multiple realms.

That begs a question: How much power and autonomy does a district attorney have in shaping their community’s criminal justice system?

“The district attorney … has a lot of discretion to decide prosecutorial priorities,” said Tung Yin, a law professor at Lewis and Clark College. “If you just consider how many possible criminal cases can be brought in any given year, it's way more than the number of cases that [prosecutors] actually were able to bring.”

It's a reality that forces every DA to identify priorities.

“Rod Underhill’s predecessor had basically made a policy for Multnomah County of de-emphasizing certain low-level petty theft cases,” said Yin, referring to Mike Shrunk, who held the position for more than three decades. “[It] isn't the same as saying that they're now legal, but simply that, as a question of prosecutorial resources, that it was more important to focus prosecutorial time and energy on other types of cases.”

One priority that gained Underhill national attention was his focus on addressing the national backlog of untested rape kits.

Pressure from his office played a key role in eliminating Multnomah County’s backlog, an effort that resulted in prosecutions and convictions of decades-old rape cases.

That national movement mirrors a national trend: one of progressive “reform candidates” getting elected as local prosecutors.

Last year, U.S. Attorney General William Barr reportedly told a Fraternal Order of Police conference in New Orleans that "the emergence in some of our large cities of district attorneys that style themselves as 'social justice' reformers, who spend their time undercutting the police, letting criminals off the hook and refusing to enforce the law," is "demoralizing to law enforcement and dangerous to public safety."

And in the 2018 race for Washington County DA, a PAC funded by billionaire George Soros reportedly hired a consultant credited with pushing for such candidates in local races across the U.S.

The national influence became even more apparent when singer John Legend tweeted a video, in which he urged Oregonians to research district attorney candidates and their stances on criminal justice reform. That campaign was organized by the American Civil Liberties Union.

It’s a movement that puts the spotlight, not just on which cases a DA chooses to prosecute, said Yin, but also what resources they put toward helping offenders rebuilt their lives after their conviction or incarceration.

That’s another avenue where a DA’s ability to serve as an advocate for certain causes can create change.

“If you make it much harder for somebody to reintegrate into society, it sort of increases the pressure for them to recidivate and commit crimes again, which is sort of the opposite of what we want,” he said. “So I think that the issue of reform is much broader than simply which crime should we emphasized last, but more generally, okay, well somebody has committed a crime. We're going to punish the person through whatever means we think are lawful, but at the end of the process, how do we then make it so that the person is less likely to re-offend?”

So, what do the candidates in this race want to change?

Knight, who served as a Deputy District Attorney in Multnomah County prior to moving to the federal side, was quoted by OPB as saying, “I don’t believe we need to tear the entire system down. I think we can agree there are changes we need to make, but there’s also a lot that we do well.”

On Tuesday, Knight elaborated on what he believes the office does well.

“I think the justice system, at its best, is a fair system that is divorced from politics and political whims and those who may be reacting to entirely different forces in society and culture,” he said. “It's based on treating everyone equally and fairly.”

When asked what he’d like to change, he touched first on better integration of mental health and addiction treatment programs into Multnomah County’s criminal justice system.

Here’s a portion of what he had to say:

KNIGHT: I think the key is to leverage that point of contact when folks come into the system, and what I mean by that is you don't give someone a pass, but … when someone comes into the system repeatedly for low level livability type offenses that we see practically downtown every day, what can you do to really ensure they don't come back?

So that means more thorough or exhaustive programming, better probation, identifying the folks who really are repeat offenders and are victimizing businesses, neighborhoods and other homeless people.

The other piece is having someone who's an advocate for public safety in this space and understands that there's a relationship between law enforcement and public safety and doing these things right and getting folks in the program. And that means the elected district attorney. And I would assume this role needs to be, I would be in front of those who are allocating the money and out in front of the public saying, look, it matters if we commit resources to these programs because candidly Multnomah County has one of the lowest resourced district attorney's office in the country.

He was also quick to focus on better integration of mental health and addiction services, and he emphasized tailoring those efforts based on data.

SCHMIDT: At the state level, we looked at jail data, jail bookings, and we combined it with Medicaid data, but we did it at an aggregate way. So, we're not looking at individual people's health records and putting that information out there.

And what we found was that in Oregon, nine percent of the people who are arrested and booked into jail account for 30 percent of our jail bookings for a year. So nine percent are using almost a third of our jail resources. And then you look at them in the Medicaid side of the data and you see that there are 150 percent more likely to be in our emergency departments and 650 percent more likely than their peers to have a mental illness and co-occurring with alcohol and drug addiction.

So what I've done at the Criminal Justice Commission is what I would like to do at the District Attorney's office. You build a coalition with local partners. You're willing to try and test innovative things. You track the data, make sure you're getting better public safety results when you try something different.

Both candidates are also advocating for ending cash bail and making it easier for convicted felons to expunge their records after living crime-free for five years, a move that would make it easier for them to get jobs and housing.

It’s when they’re asked to list other priorities that the candidates differ most.

Knight, who led the prosecution of the men accused in the 2016 armed occupation of the Malheur National Wildlife Refuge, zeroes in on far-right extremism and the violent protests that stem from it.

Here’s what he said he learned from that experience and how he’d apply it as district attorney:

KNIGHT: I think what it taught me above all is [there was] really a failure to recognize initially how insidious that ideology can be. And more importantly, you know, that a lot of folks don't view the government the way they used to and there's a lot of hostility for the government.

I really learned the best ways to approach those complicated issues when the First Amendment and free speech but up against the violence and threats of violence. … I know and can speak with law enforcement in the community about, you know, what's the most effective way to deter and manage crowds when they're here. And also about what prosecution tools there are in the event that we have a situation where people are stepping beyond the First Amendment, are threatening or engaging in acts of violence.

I know about those federal and state partnerships. You need to really both control the situation to prosecute folks if they engage in violence and to prevent those things from happening again.

SCHMIDT: We have to make sure that we are vocal about supporting our immigrant communities, that we are not going to cooperate except for what is absolutely mandated by the law.

I just recently I saw a story of ICE issuing subpoenas for information to different public safety leaders and some public safety people – I think it was in Washington County – complied. And then some people, also in Washington County if my recollection serves, didn't comply and said, ‘We're going to fight this in court, and we're going to see what the legal boundaries of that are.’

So when I say that I'm not going to cooperate with ICE. That's what I mean. I mean, I'm not just going to, if they give me a subpoena, hand things over. I'm going to fight that until I know, until it's absolutely clear that we have to comply with that.

To be consistent with the law, obviously you have to follow the law.

We need to stand up for our immigrant communities. Could you imagine if you were a victim of a crime and the only witness to the crime happening was somebody who is either undocumented or their family members are undocumented and they're too scared to go to the police or go to the district attorney's office because they're fearful of what the immigration consequences of that action might mean? Well, that doesn't help you as a crime victim and it makes our community less safe.

Election day is Tuesday, May 19.

Multnomah County officials say Thursday, May 14 is the last day a voter can mail in their ballot and be guaranteed it will arrive in time to be counted.