Students, mobilized by word of mouth and social media, skipped class to protest what they see as the failures by their governments to take tough action against climate change. 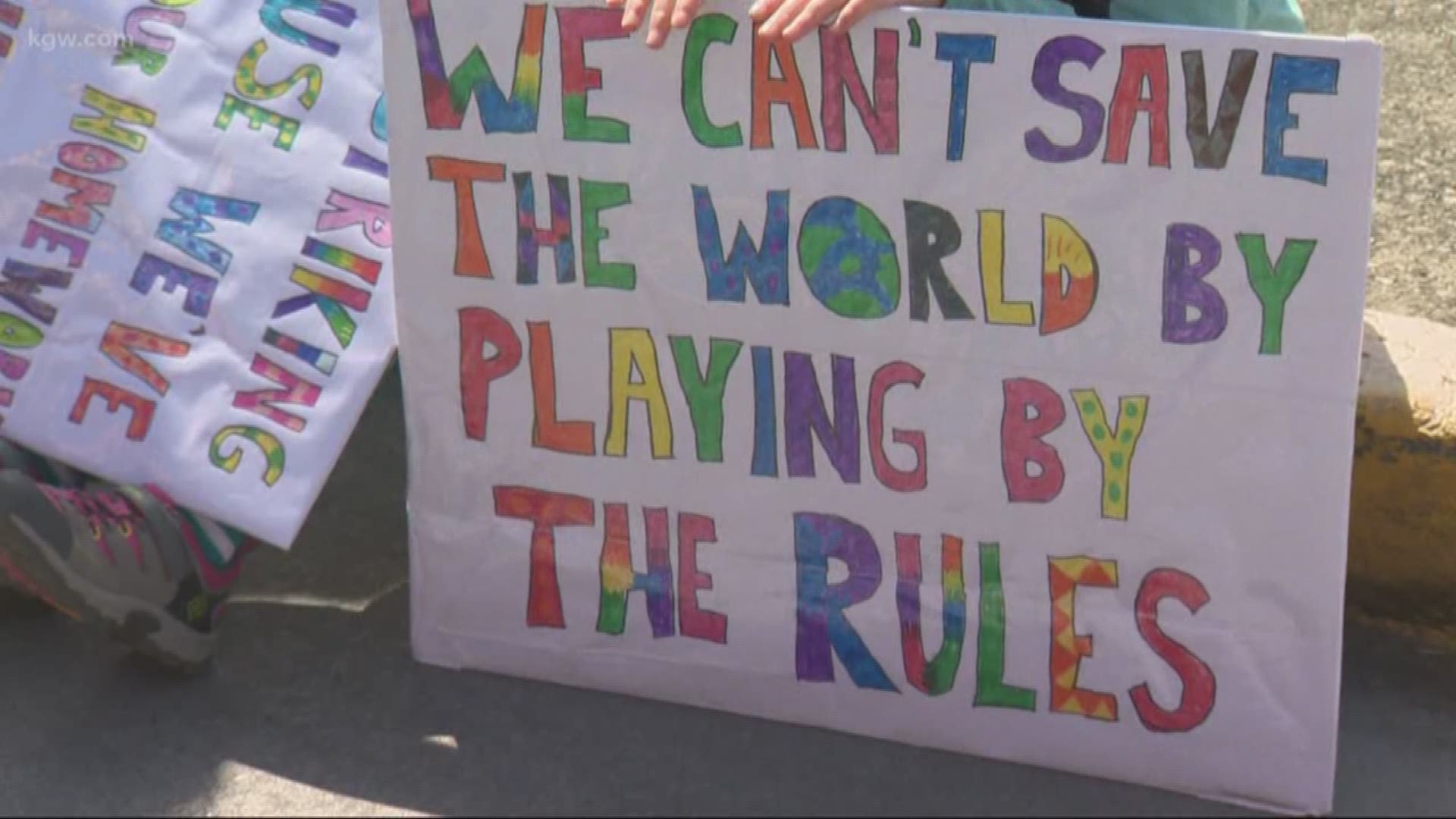 Students who want to bring attention to climate change left their classroom Friday morning for a rally that began outside Portland City Hall.

The "Global Climate Strike" started at 11 a.m., with more than 1,000 students leaving campuses citywide, some walking, some taking public transit, to arrive downtown.

“There’s so many kids here from multiple different schools. We’re from Lincoln and pretty much every one of us has walked out. I see so many people from different schools here. It’s awesome," said student Sriya Chinnaf.

After the rally outside City Hall, students marched in the streets to Salmon Street Springs. Students then marched along Waterfront Park, crossed the Steel Bridge and rallied at Portland Public Schools headquarters near the Rose Quarter.

At PPS headquarters, students demanded curriculum on climate change be implemented at all PPS schools. A spokesman for the district sent KGW the following statement:

"We are currently working to make sure science and other curricula includes a more direct approach to climate science.  We constantly work to develop curriculum and classroom programs that are relevant and meaningful to students and meet state academic standards. The next step is to determine how it is integrated into the district’s comprehensive core curriculum. The district believes climate change is a critically important subject, and we are proud of our students for raising this issue,"

“The youth wants change and we need to be respected and we’re standing her and talking to our politicians…that we care about climate change, that this can no longer be ignored because this is a crisis,” said Lincoln High School student Norah Glin.

Watch a replay of the rally

Portland Public Schools encouraged students to return to class after the march. The district said all students would be welcomed back to finish the school day.

Students in the suburbs formulated their own plans to reach civic centers.

Starting in earlier time zones, Friday's rallies were one of the biggest international actions yet, involving hundreds of thousands of students in more than 100 countries around the globe.

Students, mobilized by word of mouth and social media, skipped class to protest what they see as the failures by their governments to take tough action against climate change.

Since then, the weekly protests have snowballed from a handful of cities to hundreds, fueled by dramatic headlines about the impact of climate change during the students' lifetime. Scientists have backed the protests, with thousands in Britain, Finland, Germany and the United States signing petitions in support of the students.

Thunberg, who has been nominated for the Nobel Peace Prize, said at a rally in Stockholm that the world faces an "existential crisis, the biggest crisis humanity ever has faced and still it has been ignored for decades."

"And you know who you are, you that have ignored this," she said.

— In Berlin, police said as many as 20,000 protesters, most of them students, gathered in a downtown square, waving signs reading "March now or swim later" and "Climate Protection Report Card: F." They marched through the German capital's government quarter, stopping in front of Chancellor Angela Merkel's office.

— About 50 students protested in South Africa's capital, Pretoria, chanting "There's No Planet B." One protester held a sign reading "You'll Miss The Rains Down in Africa." Experts say Africa, with its population of more than 1 billion people, is expected to be hardest hit by global warming even though it contributes least to the greenhouse gas emissions that cause it.

— "Now or Never" was among the signs brandished by enthusiastic teenagers thronging cobblestoned streets around the domed Pantheon building, which rises above the Left Bank in Paris. Some protesters criticized French President Emmanuel Macron, who sees himself as the guarantor of the landmark Paris climate accord but is criticized by activists for being too business-friendly and not ambitious enough in efforts to reduce French emissions.

— Thousands marched in rainy Warsaw and other Polish cities to demand a ban on burning coal, a major source of carbon dioxide. Some wore face masks as they carried banners that read "Make Love, Not CO2."

— Thousands marched through Madrid and more than 50 other Spanish cities, for Spain is vulnerable to rising sea levels and rapid desertification .

"A lot happens on social media because you can reach a lot of young people very quickly," she told The Associated Press during the Berlin demonstration.

Azalea Danes, a student at the Bronx High School of Science, wasn't a climate activist until two weeks ago when she read about Thunberg's efforts. Now she is one of the top organizers of the youth climate strike in New York City, where she hopes thousands will rally in three places later Friday.

That shows how these protests are organized from the bottom up, she said.

Volker Quaschning, a professor of engineering at Berlin's University of Applied Sciences, said it was easy for politicians to belittle students.

"That's why they need our support," he said. "If we do nothing, then parts of this planet could become uninhabitable by the end of the century."

Scientists have warned for decades that current levels of greenhouse gas emissions are unsustainable, so far with little effect.

In 2015, world leaders agreed in Paris to a goal of keeping the Earth's global temperature rise by the end of the century well below 2 degrees Celsius (3.6 degrees Fahrenheit) compared with pre-industrial times.

Yet the world has already warmed by 1 degree C since then and is on track for an increase of 4 degrees Celsius, which experts say would have far-reaching consequences for life on the planet.

In Germany, environmental groups and experts have criticized government plans to continue using coal and natural gas for decades to come.

Quaschning, one of more than 23,000 German-speaking scientists to sign a letter of support this week, said Germany should stop using all fossil fuels by 2040. This would give less-advanced nations a bit more time to wean themselves off coal, gas and oil while still meeting the Paris goal globally.

"This is going to require radical measures and there isn't the slightest sign of that happening yet," said Quaschning.

In Stockholm, Thunberg predicted that students won't let up their climate protests.

"There are a crisis in front of us that we have to live with, that we will have to live with for all our lives, our children, our grandchildren and all future generations," she said. "We are on strike because we do want a future."