Oregon and Southwest Washington lawmakers at the U.S. Capitol let their constituents know they were safe as a pro-Trump mob stormed the building. 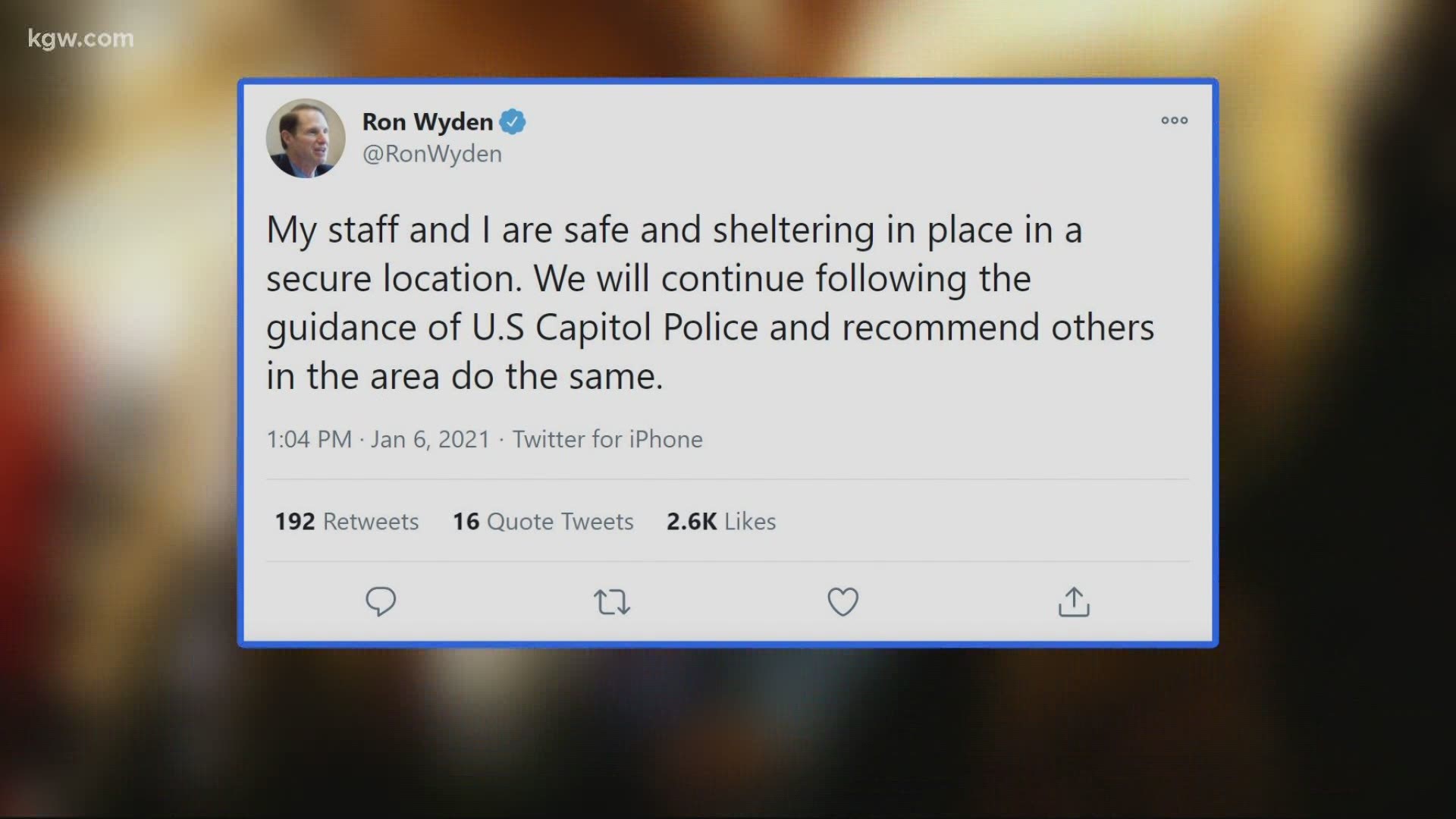 The Associated Press described the event as a "stunning attempt to overturn America’s presidential election." Lawmakers had to be rushed from the building as an angry mob interrupted the objections to Joe Biden's Electoral College victory.

A woman was shot inside the Capitol and later died, and five other people were taken to a hospital during the violence, NBC News reported.

In a press conference via Zoom, Sen. Jeff Merkley (D-Ore.) said he and his team were safe, and that he was taking shelter with other senators. He did not disclose where they were hiding, but described the chaos as abrupt.

Merkley said before evacuating the Capitol building, Vice President Mike Pence was rushed off the floor, and the doors to the Senate chamber were locked over concerns they could be breached.

He said senators could hear noises from outside, and it was assumed people had gotten into the building. He said there were fears over what the senators could do if a person with a gun entered the chamber.

"It's a strange feeling to be locked in a room that you know is not really designed to be secure when there are angry people outside," he said.

Merkley blamed Pres. Donald Trump for the angry reaction from his supporters, saying the president has convinced them of a false reality, referring to baseless claims that Joe Biden "stole" the election from him.

Electoral college ballots rescued from the Senate floor. If our capable floor staff hadn’t grabbed them, they would have been burned by the mob. pic.twitter.com/2JCauUIlvg

He also said the situation resulted from the lack of strong bipartisan pushback to what he called "lies and conspiracy theories promoted by the President of the United States" since the November election.

Sen. Ron Wyden (D-Ore.) said on Twitter that he and his staff were safe and sheltering in place in secure location. He described people in the crowd as "criminals bent on destroying democracy"

"Today's riots by insurrectionists in the nation's Capitol caps off four years of Donald Trump fanning the flames of fanaticism," Wyden tweeted. "Every Republican lawmaker who supported his efforts to overturn a legitimate election shares responsibility for today's violence."

Rep. Peter DeFazio (D-Ore.) also tweeted he was safe, adding that he was "horrified at the dangerous actions of those now storming the Capitol in an effort to overturn the will of the people."

I am safe, but I am horrified at the dangerous actions of those now storming the Capitol in an effort to overturn the will of the people. This is nothing short of a direct assault on our democracy.

"This is nothing short of a direct assault on our democracy," DeFazio wrote.

Reps. Suzanne Bonamici (D-Ore.) and Earl Blumenauer (D-Ore.) both said they were safe. They referred to the crowd's actions as "domestic terrorism" and put blame on Trump for provoking the violence.

I am continuing to shelter in place. Trump repeatedly incited this act of domestic terrorism, including encouraging armed protestors this very morning, steps from the Capitol. He must tell his supporters to leave the Capitol immediately before more people are hurt.

Rep. Cliff Bentz (R-Ore.), Oregon's only Republican in the U.S. House, tweeted that he urges those at the U.S. Capitol to respect law enforcement and allow Congress to resume deliberation in the electoral certification process.

Herrera Beutler tweeted her response to the storming of the Capitol.

Sen. Patty Murray (D-Wash.) tweeted that she and her staff were safe.

She wrote, "I condemn in the strongest terms the hate-fueled violence we are seeing in our nation's Capitol today, as should every leader committed to the peaceful transfer of power in our country."

In response to questions about my safety: I'm safe and so is my staff, but I condemn in the strongest terms the hate-fueled violence we are seeing in our nation's Capitol today, as should every leader committed to the peaceful transfer of power in our country.

A spokesperson for Sen. Maria Cantwell (D-Wash.) said she was safe as well.

In response to the violence seen in Washington D.C., President Trump wrote multiple tweets urging his supporters to remain peaceful, describing the Republican party as the "Party of Law & Order."

Trump also tweeted a video in which he continued to claim without evidence that the election was "stolen," and that it was a "landslide election and everyone knows it," before asking for people to go home peacefully.

The Oregon Republican Party put out a statement condemning the violence in D.C., but supporting Trump by claiming fraud was "real and pervasive" in the 2020 election.

“Today was a day to follow the Constitution and address the very legitimate concerns of tens of millions of Americans with the fairness of the 2020 Presidential election,” said Oregon Republican Party Chairman Bill Currier.

Currier said the Electoral College certification challenges and peaceful protests should have reminded the public that "we live under the rule of law, not the rule of the news media or big tech companies, and absolutely not under the rule of violent mobs."

He called for those who participated in violence at the Capitol to be prosecuted to the fullest extent of the law, but added that electoral college certification challenges must proceed.

"Civilized debate and a thorough, relentless, and serious examination of the facts are needed now more than ever to restore voter confidence in our election process and our institutions," Currier said.

President-elect Joe Biden gave an address as the Capitol was under siege:

“At this hour our democracy is under unprecedented assault unlike anything we've seen in modern times,” Biden said, adding that what unfolded was, “an assault on the rule of law like few times we have ever seen it.”

He said the uprising bordered on sedition, adding, "The scenes of chaos at the Capitol do not reflect a true America, do not represent who we are.”

“I call on this mob to pull back and allow democracy to go forward,” Biden said. “At their best the words of a president can inspire, at their worst they can incite.” 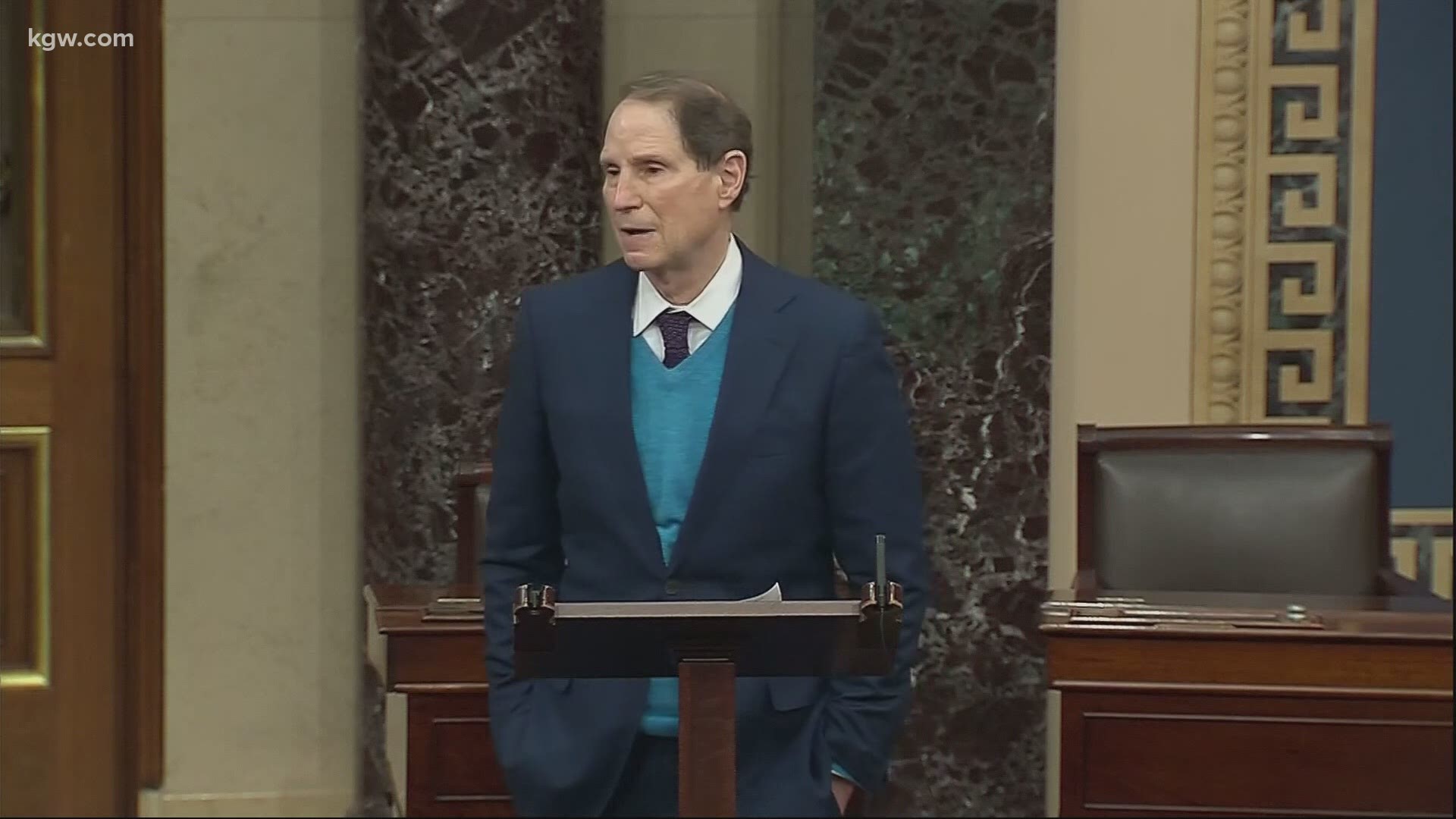