PORTLAND, Ore. -- Portland Mayor Ted Wheeler said the city will not "be complicit in the deportation of our neighbors" after President Donald Trump signed a orders cutting off federal funding for sanctuary cities. 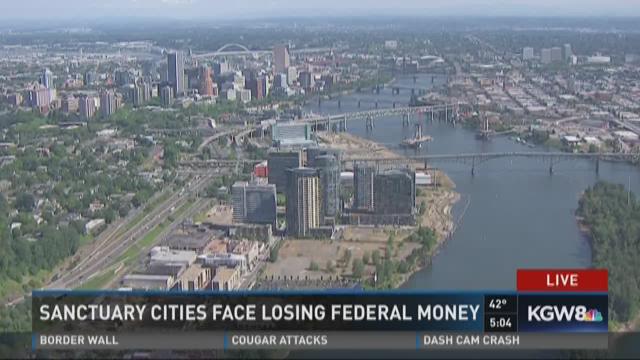 PORTLAND, Ore. -- Portland Mayor Ted Wheeler said the city will not "be complicit in the deportation of our neighbors" after President Donald Trump signed a orders cutting off federal funding for sanctuary cities.

Dozens of cities around the country have declared themselves sanctuaries for undocumented immigrants. In Portland, that means the city has an unwritten policy that it will not comply with requests from Immigration and Customs Enforcement to hold undocumented immigrants in jail for an extra 48 hours so ICE can process them.

“For more than 150 years, Portland has been a destination for those wanting to apply their hard work to the purpose of creating a better life for themselves and their families. My own family made the trek on the Oregon Trail. We are a city built on immigration.

“We are not going to run from that history. We will not be complicit in the deportation of our neighbors. Under my leadership as Mayor, the City of Portland will remain a welcoming, safe place for all people regardless of immigration status.

“This approach is consistent with the Oregon state law and the 4th and 10th Amendments of the United States Constitution. We will not compromise our values as a city or as Americans and will resist these policies.”

“Trump’s plan to turn local police into immigration agents promotes crime by destroying the community policing strategies essential for effective law enforcement," he said. "It’s a big mistake, and I stand with our cities determined not to make this mistake.”

“It’s clear that effective policing requires trust between law enforcement and community members, and any action to remove essential funding from cities and counties choosing to not enforce certain federal immigration laws seriously threatens public safety,” Wyden said. “With that clear premise in mind, I will keep working to protect the priorities of Oregonians, including the choice by cities like Portland and counties in our state to welcome immigrants and refugees as neighbors.”

Multnomah County Sheriff Mike Reese said the county would not use county resources for ICE holds.

Portland has symbolically been a sanctuary city for years, and Mayor Ted Wheeler reaffirmed that status in November. The city does not have laws that officially protect undocumented immigrants from being retained for ICE holds.

Read more: What is a sanctuary city and what does it mean in Portland?

About $49 million in the city budget comes either directly or indirectly from federal funds annually. The mayor's office said so far, Trump's threats have been unclear in terms of how much money would be withheld from Portland and when the penalty would go into effect.

Beaverton also has declared itself a sanctuary city. Officials say the city could lose $1.6 million in federal funding due to its sanctuary status.

"We value the members of our community here and we're willing to, at some point, sacrifice money to make sure community members feel safe," said Beaverton city councilor Lacey Beaty.

Other cities around Portland such as Forest Grove have not adopted the sanctuary designation. The Forest Grove city council was split on the decision and ultimately decided against it.

"The sanctuary designation would have offered no substantive change to policy, policing or afforded protections and would have only been a symbolic gesture," said councilor Matt Vandahey.

Some colleges have declared themselves sanctuary campuses. Portland State University was the first in Oregon to do so.

PSU president Wim Wiewel said the decision was made “to try to protect this group of students who have been in the United States for most of their lives, who are really Americans for all practical purposes and whose insights and knowledge we need as a country.”

It's unclear whether Trump will withhold federal funding from educational institutions.

Christine Pitawanich contributed to this report.