Mayor Wheeler on violent Portland protests: 'This is not the world I want to live in'

Mayor Ted Wheeler said he will be consulting community, business and civil rights leaders on how to handle violent clashes in the future. 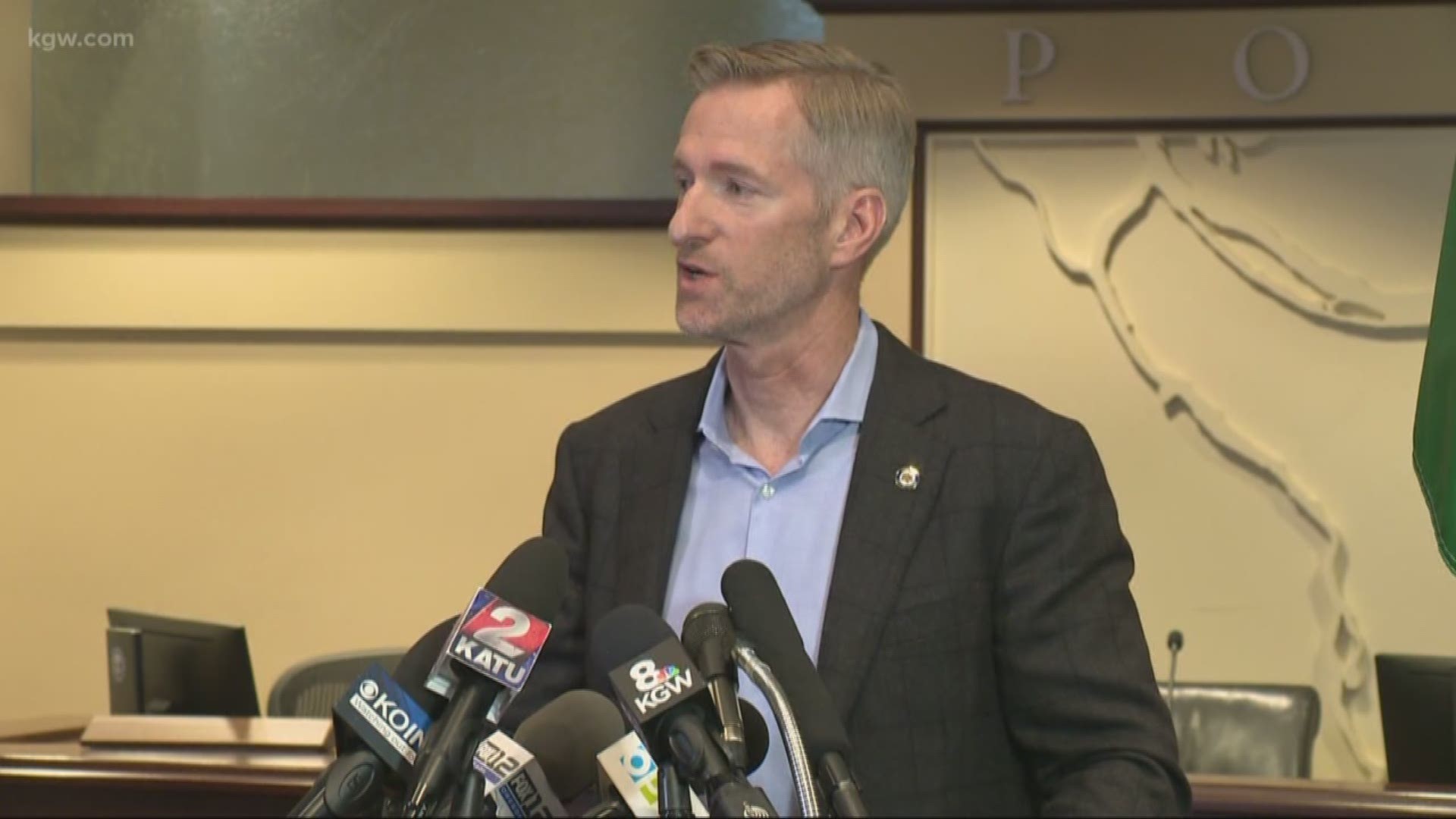 PORTLAND, Ore. — Portland Mayor Ted Wheeler spoke to the media on Monday for the first time since left- and right-wing groups clashed violently in downtown Portland on June 29.

Mayor Wheeler's stance on the violence was clear: he does not condone it. He told media and the public during his press conference that he plans to meet with police, community, business and civil rights leaders to discuss how to mitigate violence when it comes to protests.

"The right to assembly and free speech have been co-opted by a very small group of individuals who hide behind these important First Amendment values, not to come here to Portland to engage in demonstrations in favor or in opposition to particular values, but they come here instead with the intent to commit acts of violence," Wheeler said.

In 2018, Wheeler said there were more than 200 protests, most of which were peaceful, and attributed that to the hard work of the Portland Police Bureau.

Further lauding the performance of PPB, Wheeler said at least three demonstrations were going on simultaneously on June 29 and he was glad the violence was not more widespread.

In response to the suggestion made by Outlaw to ban masks during protests, Wheeler said he was not comfortable taking a stance. He said all ideas should be brought to the table as the conversation around violent protests continues.

“I want to hear more about it,” Wheeler said. “I certainly heard it during the press conference. I heard some constitutional and potential legal questions that were raised. I want to have the opportunity to meet with [Chief Outlaw] and work with her on her perspectives on it, so I'm not ready to have a position on it today.”

RELATED: Dispatchers berated by callers upset with police response to assaults during protest in Portland

Mayor Wheeler said the violence comes to Portland largely in the form of outsiders.

"A number of the people who have been engaged in violence in the streets of this community, they are not in this community," he said. When those people return home, Wheeler said Portland is left to deal with the consequences.

Wheeler mentioned specifically Joey Gibson and the Proud Boys, a right-wing group involved in the protests. He said he understood that Gibson had in the past come to Portland with the intention of inciting violence.

"It is my understanding that he came here because he believed he could get people on the left to agitate against the police. What kind of person does that?" Wheeler said.

Conservative writer Andy Ngo was violently attacked during the protest.

"Andy Ngo, he and I don’t agree on much, he and I have certainly had our disagreements in the past. On this issue there is no light between us," Wheeler said. He called the violence against Ngo "abhorrent."

Many others had milkshakes thrown at them in the brawl that broke out and Wheeler said that he and police, looking back, understand how a tweet sent by the Portland Police Bureau may have been misleading.

After the most recent violent protests, Portland Police Association President Daryl Turner said the mayor, who also serves as police commissioner, needs to "remove the handcuffs from our officers and let them stop the violence through strong and swift enforcement action."

"He crossed a line when he publicly stated that I was not allowing the police to enforce the law," Wheeler said. He said that Turner's message was used as false proof by people, particularly in right-wing political circles, that he was keeping the police from doing their jobs.

"He contributed to the misinformation and the noise. I don't think he did the Police Bureau any favors and he certainly didn't do me any favors," he said.

In all, Wheeler said that even as the climate of protesting has "taken a dark turn," Portland is a safe community. He claims the violence during protests is less widespread and happens less often.

When asked about the role Antifa has played in the violence, Wheeler said, "My message is the same to everyone. If you are coming here under the guise of First Amendment rights to assembly and free speech, but your actual intentions are to commit acts of violence or a street brawl, I absolutely condemn that 100%."

Wheeler said there is no timeline on when changes will be made but he has a sense of urgency. He claimed that groups are planning a rally out in front of his house and other locations in Portland in the coming weeks.

"Trust is earned," Wheeler said of why the community should trust him to make changes. "What I hope they know about is that that's not the world I want to live in."

Editor's note: A previous version of this story incorrectly stated that President Donald Trump tweeted about the protests. We've corrected the error.