Hundreds of undocumented immigrants were rounded up this week in a half-dozen states in what advocacy groups and a  from Texas call targeted raids. Immigration officials, however, cast the arrests as a routine enforcement "surge" while acknowledging the bar for deportation has been lowered.

Hundreds of undocumented immigrants were rounded up this week in a half-dozen states in what advocacy groups and a from Texas call targeted raids. Immigration officials, however, cast the arrests as a routine enforcement "surge" while acknowledging the bar for deportation has been lowered.

ICE officials reported 161 arrests in over the past five days and 192 arrests in Georgia, North Carolina and South Carolina alone. Advocacy groups began receiving calls Thursday from immigrants and their lawyers reporting raids at homes and businesses in the greater .

In one case, agents showed up at the home of a 50-year-old house painter named Manuel Mosqueda in the Los Angeles suburbs looking to arrest an immigrant who wasn’t there. In the process, they spoke with Mosqueda, arrested him and put him on a bus to Mexico — though lawyers were able to halt his deportation and bring him back, the Associated Press reported.

Could this woman be the first deported because of Trump’s orders?

Advocacy groups and some Democratic politicians, however, viewed the arrests as a new move against undocumented immigrants in the wake of a sweeping executive order signed Jan. 25 by .

That order made clear that just about any immigrant living in the country illegally could be a priority for deportation, particularly those with outstanding deportation orders. It also said enforcement priorities would include convicted criminals, immigrants who had been arrested for any criminal offense, those who committed fraud, and anyone who may have committed a crime.

Under , more than 2 million people were deported, including a record of more than 409,000 in 2012, but the government focused on immigrants in the country illegally who posed a threat to national security or public safety and those who recently crossed the border.

“These reports show the serious consequences of (Trump's) executive order, which allows all undocumented immigrants to be categorized as criminals and requires increased enforcement in communities, rather than prioritizing dangerous criminals,” , D-Calif., said in a statement.

“This is retaliatory and it is a way to provide political cover ― ‘Look what we’re doing, we’re out there being tough on criminals’ ― when in reality, they’re breaking up families,” Rep. , D-Ariz., told The Huffington Post. “It’s callous and it’s very, very dangerous.”

The arrests are playing out against a backdrop of fear within immigrant communities, underscored by the deportation Thursday of an Arizona woman, and mother of two American-born children, who came to the U.S. 22 years ago as a 14-year-old.

The deportation of Guadalupe Garcia de Rayos, 36, of , who was taken into custody Wednesday during a routine check-in at the Phoenix offices of ICE, prompted the Mexican government to warn of a "new reality" for its citizens living in the United States and advised them to "take precautions."

Her removal also signaled that federal authorities, who have focused in recent years on the worst criminals for deportation, were lowering the bar. Rayos, who was convicted in 2008 of using a fake Social Security card, had been reporting in regularly to immigration officials but until Wednesday had been allowed to remain in the country.

Fears of a crackdown have been mired in recent days in something of a semantic game over what is — and isn't — "routine" between advocacy groups, immigrants communities and federal authorities. 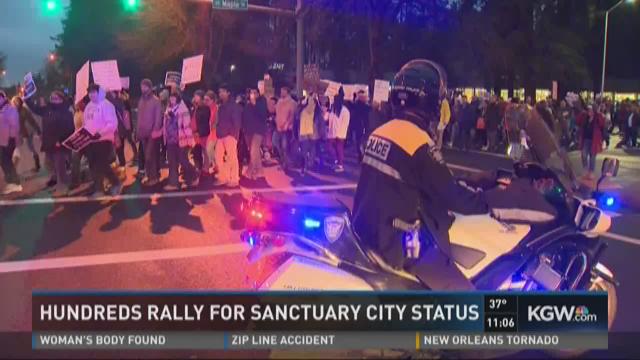 U.S. Rep. , D-Texas, said Friday that he was informed by ICE officials in San Antonio of the launch of "a targeted operation in South and Central Texas as part of Operation 'Cross Check.'"

“I am asking ICE to clarify whether these individuals are in fact dangerous, violent threats to our communities, and not people who are here peacefully raising families and contributing to our state. I will continue to monitor this situation," he said.

In Los Angeles, David Marin, field office director for ICE enforcement and removal operations in the Los Angeles area, announced Friday that 161 people were arrested in six Southern over the past five days in what he called an "enforcement surge." He denied reports that the operations amounted to mass arrests.

"The rash of these recent reports about ICE checkpoints and random sweeps and the like — it is all false, and it is definitely dangerous and irresponsible because reports like that create a panic, and they put communities and law enforcement at risk,” he told reporters on a conference call. He said the operation was planned prior to President Trump taking office.

He noted that 151 of the arrests involved people with criminal records, with about 75% having been previously convicted of felonies, including child sex crimes, weapons charges and assault. Marin said five people were detained because they had final deportation orders already in place.

The other five people deported had no criminal record. Marin said those five would not have fallen under the enforcement priority list under Obama, but did so now under Trump's executive order, an indication of changes afoot under the new directive.

Another sign of change came from comments before Congress by new John Kelly, who indicated the use of new tactics for enforcing immigration laws. He told lawmakers that immigration agents expressed frustration that they were not fully allowed to enforce immigration laws under the Obama administration. He predicted Trump’s directives would end that frustration.

“I think their morale has suffered because of the job they were hired to do, and then in their sense, they’re … kind of hobbled or, you know, hands tied behind their back, that kind of thing,” Kelly told the House Homeland Security Committee. “And now, they feel more positive about things. I bet if you watch the morale issue, you’ll ... be surprised going forward.”

A report released Thursday by the nonpartisan estimates more than 2.5 million immigrants in the country illegally live in the metropolitan areas of New York, Los Angeles and Chicago, which have pledged to fight President Trump’s plans to expand deportations.

In addition, 37% of immigrants living in Phoenix, Houston, Dallas and Denver lack legal status, compared to 26% nationwide, the report said.