I owe how much? Portlanders shocked by impact of new tax law

Andy Kraft and Amy Elias had grown comfortable getting a small refund each year, a few hundred dollars or more. Then they found out they owe $10,160 this year. 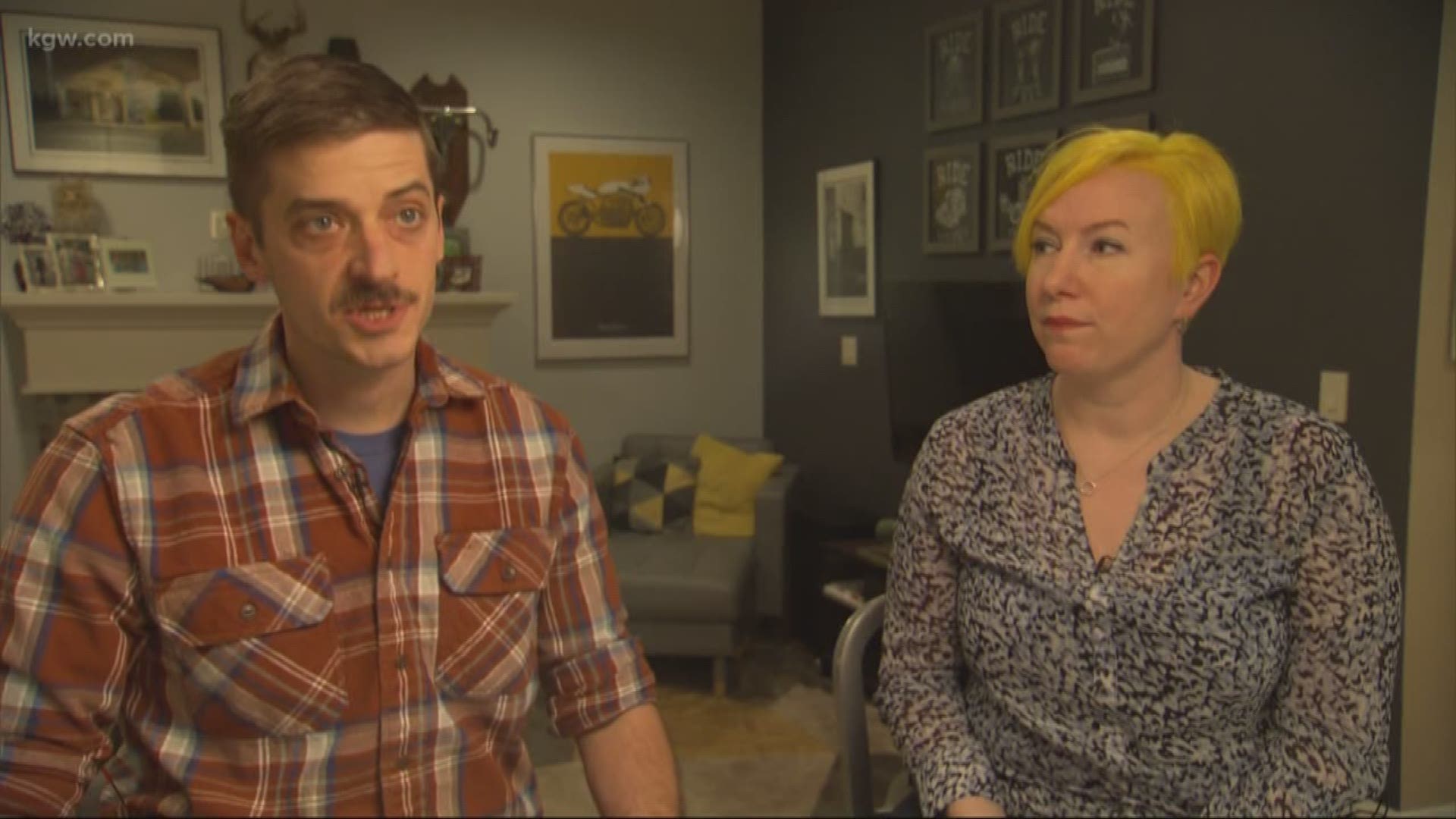 The first tax filing season under the new federal tax law is proving to be surprising, confusing — and occasionally frightening — for some Americans, especially those accustomed to getting money back from the government.

Take Andy Kraft and Amy Elias of Portland, Oregon. The couple had grown comfortable getting a small refund each year, a few hundred dollars or more. Then they found out they owe $10,160 this year.

“I will never forget the moment, I thought ‘We look good’ and then we added in the next W-2 and my jaw hit the floor,” Kraft said. “There was no way I wanted to believe that what I was looking at was accurate.”

Credit: Gillian Flaccus
Husband and wife Andy Kraft and Amy Elias, of Portland, Ore., talk during an interview about their 2018 tax paperwork in their Portland home on Monday, Feb. 18, 2019. The couple got a small refund last year but this year owe more than $10,000 in taxes under the new tax law.

President Trump promised a reduction in taxes with the new law. And by most measures, the majority of Americans will see one. The nonpartisan Tax Policy Center projected the tax law would reduce individual income taxes by about $1,260 on average, although it benefits higher earners more.

So not everyone will see a massive tax bill or a drop in their refund. Some people already saw the benefit in the form of bigger paychecks. That’s because the law forced employers to change what they withheld. But the system is far from perfect, and many workers didn’t have enough in taxes set aside. Now, the IRS wants that money.

“We were very comfortable with our tax law, it had basically been there since 1986, suddenly all these things that were very important to people changed ... it’s all different,” said Howard Gleckman, a senior fellow at the Tax Policy Center.

Kraft and Elias are able to pay their tax bill but he’s still stunned. He even tried to reverse-engineer things to figure out where they went wrong, diving into page after page of IRS rules. He painstakingly put together all the numbers. The couuple ultimately asked a CPA to verify the figures they were seeing on TurboTax. Crushingly, they were correct.

Their total tax was up slightly — by about $300 because of changes to their financial picture. Their effective tax rate was lower, but they still owed the government.

“I feel like I have reached a stage of grief of acceptance,” he said. “In a twisted way I should have been paying this all year and now I just have to pay it in one lump sum.”

A number of experts such as Gleckman are urging taxpayers to obsess less about their refund or what they owe when measuring the effect of the new tax law. These are just a sliver of your tax picture.

But the truth is, many Americans have come to rely on refunds. About three-quarters of U.S. taxpayers typically get one and they had averaged around $2,800. For some low-income households it is the biggest cash infusion of the year.

The IRS reported Thursday that the average tax refund as of the second week of filing season was $1,949, down 8.7 percent from the year earlier. The total number of refunds is down 16 percent.

Experts caution it is too early to draw conclusions about a tax season that ends in April. Plus, the number of returns — 27 million as of Feb. 8 — is down 10 percent from a year ago, due in part to the partial government shutdown. The picture will become much clearer as more filings are processed, refunds are issued and the IRS gets back up to full speed.

All the same, the initial results have surprised early filers and worried those who haven’t yet tackled their taxes.

Part of the problem centers around how employees and employers adjusted (or didn’t adjust) withholdings from paychecks to account for the law’s changes. The government issued updated withholding guidelines to help employers determine how much to set aside from an employee’s paycheck to cover taxes. Withhold too much and you get a refund at tax time; too little and you owe.

It is at best, an estimate. But it’s an estimate that grew drastically more difficult to make under the new law.

The Government Accountability Office estimated in a report last summer that about 30 million workers had too little withheld from their paychecks, which made their take home pay bigger but increased their tax liability. That’s about 3 million more workers than normal.

Few taxpayers appear to have heeded the IRS’ advice to do a “paycheck checkup” to make sure they had the proper amount withheld. Payroll processor ADP, which is responsible for paying one out of every six Americans, said the vast majority of people in its system didn’t update their withholdings last year.

Some taxpayers who did make adjustments found they couldn’t get it quite right.

Kevin McCreanor of Milton, Georgia and his wife normally get a sizeable refund each year — it was more than $12,000 last year. While they know waiting for a large refund isn’t the best strategy financially, they like a refund and they put anything they get back toward their daughters’ education. Their income, earned primarily from his wife’s job in telecom, can vary greatly, so there was comfort in never facing a big bill.

The couple increased her paycheck withholdings to ensure the same but found they are only getting back $519 this year. Their income and tax rate did increase, and McCreanor acknowledges there is probably more he could have done to prepare but he is very disappointed all the same.

Some surprises were welcome, however. Brian Goodell and his wife typically face a tax bill of anywhere from $10,000 to $15,000 each year. But this year the Tigard, Oregon, couple is getting a $15,000 refund. They believe they got some benefit from the increased child tax credit. They also made more charitable donations and increased their withholdings. While Goodell isn’t entirely sure why it worked out so well, he’ll gladly take the refund.

Taxpayers can get a better sense of how they fared by looking at their tax liability or effective tax rate. This information is often available on the summary received from an accountant or tax preparation software. They can also look at the “total tax” on those summaries or form 1040. These are not perfect measures either, but provide some perspective.

And remember that getting a refund is not necessarily a good thing. Breaking even is really the best outcome from an economic point of view. If you get a refund, that means the government has been holding onto your money when you could have been using it.

Additionally, consider that taxes are rarely an equal comparison from year-to-year, said Eric Bronnenkant, the head of tax at Betterment and a CPA and certified financial planner. People’s lives change in ways that can dramatically influence their taxes, such as marriages, divorces, kids, moving or job changes. The average taxpayer may not realize the full impact some of these changes might have.

“I am not surprised by the reaction people are having,” Bronnekant said. “I think for some people the reaction is more justified than others.”