Brown signed the bill that adds more people to an existing ban. 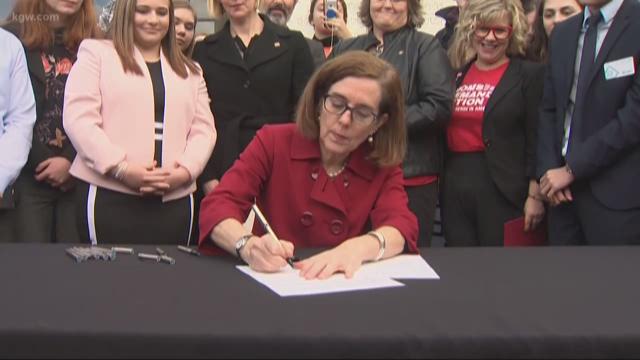 SALEM, Ore. -- Democratic Oregon Gov. Kate Brown has signed into law a bill that bars convicted domestic abusers and people under restraining orders from buying or owning guns and ammunition.

Brown signed the bill that adds more people to an existing ban on the steps of the Oregon State Capitol as several hundred onlookers cheered.

Among them were high school students who had come to press for school safety and to meet with Brown.

"We will not be a statistic!"

Powerful words from students at the State Capitol today, advocating for the importance of continued action to end #gunviolence and the steps they would like to see the state take to improve school safety. pic.twitter.com/loUmDntXig

Brown said the law is the first passed since the Valentine's Day massacre at a Florida school.

The bill was introduced before the shooting, and was passed by lawmakers after the killings of 17 people.

"Today marks an important milestone, but we know we have more to do. It's long past time we hold the White House and Congress accountable," said Brown. "Now's the time to enact real change and federal gun safety legislation."