Senate Republicans walked out in protest over a cap-and-trade bill that pushes Oregonians to lower pollution by ditching fossil fuel engines. 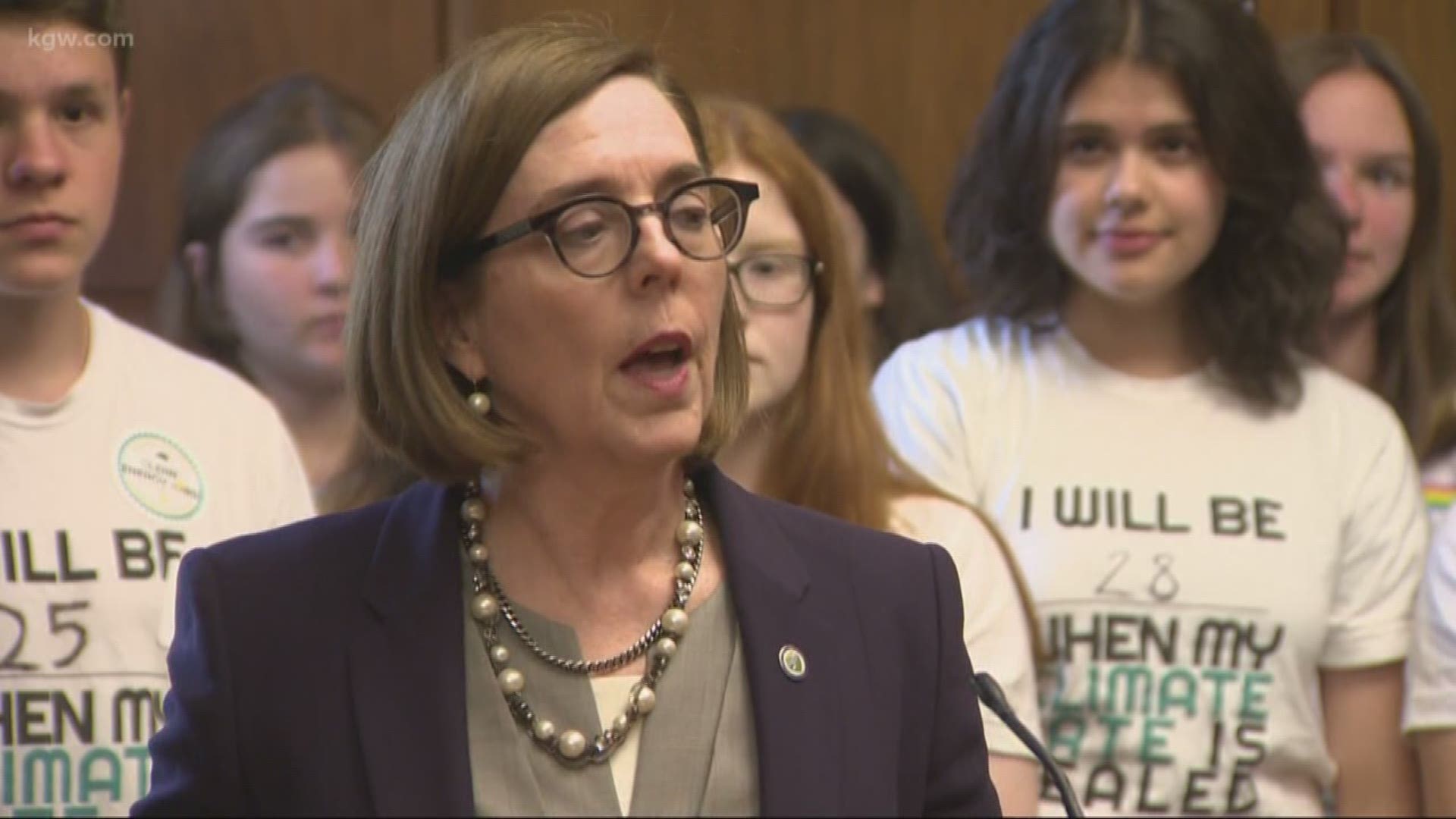 SALEM, Ore. -- Gov. Kate Brown on Thursday authorized Oregon State Police to round up GOP senators who have staged a walkout in protest of the cap-and-trade energy conservation bill.

"The Senate Republicans have decided to abandon their duty to serve their constituents and walk out," Brown said in a statement.

"It is absolutely unacceptable that the Senate Republicans would turn their back on their constituents, who they are honor-bound to represent here in this building," she said. "They need to return and do the jobs they were elected to do.”

In an awkward opening of the Senate, President Peter Courtney called it the "saddest day of my legislative life," to ask Brown to use troopers to find the senators. The Thursday Senate session began with only Democrats answering roll call.

No Republican senators have shown up and some even left the state.

Sen. Tim Knopp, who represents Bend, said he is out of the state but not with other senators. He said the senators remain united and in contact about the walkout.

"We had about 1,000 loggers in the Capitol the other day and it didn't seem to have any impact on the thinking of people who are pushing this bill forward," Knopp said over the phone. "So, the only options we had to slow this bill down and get the attention of the public and the majority was to deny a quorum and walk out."

A spokeswoman for Senate Republicans confirmed some members left the state because state police don't have jurisdiction outside Oregon. Oregon State Police can force any senators they track down in Oregon into a patrol car to return them to the Capitol.

OSP said Brown has authority under Oregon law to direct the agency to provide assistance with bringing back senators to the Capitol for quorum.

“While we obviously have many tools at our disposal, patience and communication is and always will be our first, and preferred, option," OSP said in a statement Thursday afternoon.

The missing legislators will be fined $500 for each floor session they miss starting Friday, with the money taken from salary or per diem.

It's the not the first time OSP has been used to retrieve state senators. In 2007, troopers were sent to an Oregon State University baseball game to bring Republican senators, who walked out over a tax deal, back to the Capitol. A different senator reportedly attended the floor session, without police assistance, to provide quorum.

Sen. Brian Boquist, a Republican from Dallas, pushed back on Wednesday against the governor's threats to mobilize the state police.

"If you send the state police after me," he told Senate President Peter Courtney, "Hell's coming to get you."

More: Hear from some of Boquist's constituents

Republicans walked out of the Senate earlier this session in protest of a school funding tax package, denying the chamber enough lawmakers to continue with a vote. The sergeant-at-arms of the Oregon Senate was ordered to search the Capitol for Republican senators who were refusing to attend. The standoff lasted four days, until the governor struck a deal to table legislation on gun control and vaccine requirements.

In a prepared statement, the GOP said Democrats failed to follow a procedural agreement made after the earlier walkout. The cap-and-trade bill should be referred to voters, they said.

Brown said Wednesday she was willing to extend the legislative session, which has just over a week left, and mobilize state police if Senate Republicans followed through with their threat to block the vote on the sweeping climate plan.

"I am prepared to use all resources and tools available to me as Governor to ensure that Oregonians are being served by their leaders," she said in a statement. "I am in close communication with Oregon State Police and my office is making preparations for a special session."

"Walking out is part of the conversation because the governor is not willing to move on her position on the bill," said Baertschiger, from Grants Pass. "She is only representing Portland and the environmental community, not rural Oregonians."

The walkout tactic is rare, but has been used throughout history, sometimes creating comical scenes. Abraham Lincoln once leapt out of a window in an attempt to deny a quorum when he was a lawmaker in Illinois. In Washington D.C. three decades ago, U.S. Sen. Bob Packwood (R-Oregon) was carried feet first into the Senate chamber after Democrats ordered the arrest of Republican senators who were denying a quorum.

In 2001, Oregon House Democrats walked out for several days to prevent a vote on a Republican redistricting bill.

In 2003, Texas Democrats fled to neighboring Oklahoma to deny a quorum, holing up in a Holiday Inn to block a GOP redistricting bill. The Republican House speaker ordered state troopers to find the Democrats and have them arrested. The Democrats returned to Texas after the bill's deadline passed and it was effectively killed.

The walkout brings all Senate business to a halt. Senators still need to vote on the budget as well as legislation on affordable housing, paid family medical leave and an increased tobacco tax.

But the cap-and-trade legislation remains a sticking point.

RELATED: Oregon Republican senators walked out over cap and trade. So, what’s next?