Affirmative action, car-tab initiatives too close to call after initial returns in Washington

Keep up with some of the top general election races in Washington state. 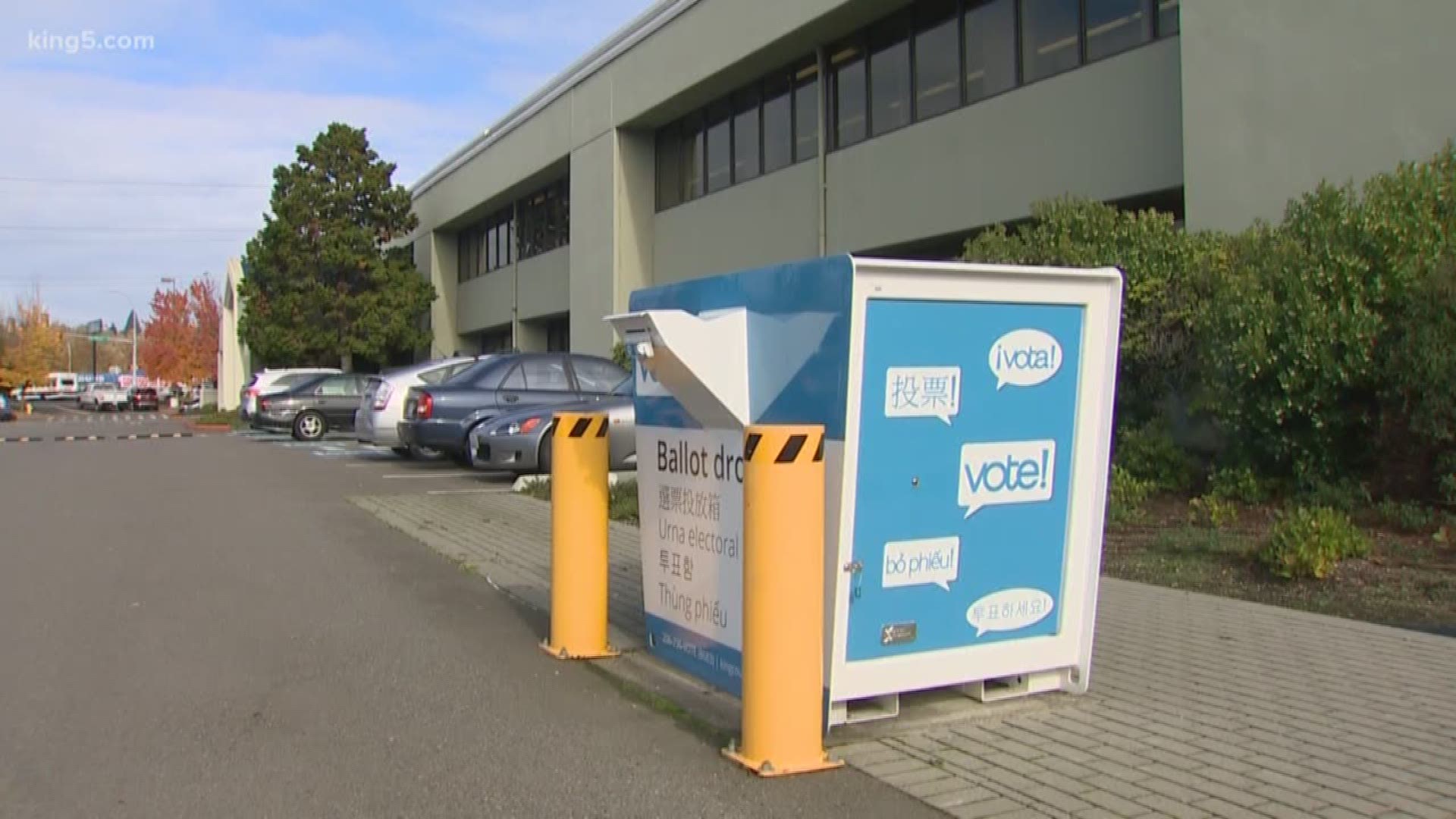 Tuesday's election includes scores of local contests across the state, including city council and mayoral races, judicial races and two legislative seats where recent appointees faces challengers as they seek election to a full term. But the main items are two of the statewide ballot measures.

Washington Secretary of State Kim Wyman hoped voter turnout would reach the 40 percentile range, but as of Wednesday afternoon voter turnout was around 37%.

Election results are certified by each county on November 26, 2019. The Secretary of State certifies final results by December 05, 2019.

New numbers show voters in favor of rejecting Referendum 88, which would repeal a ban on affirmative action in Washington.

On Friday, 51% of voters seemed in favor of rejecting the measure.

Referendum 88 asks voters whether they want to approve or reject Initiative 1000, which was passed by the Legislature in April. I-1000 amends current statutes to allow one's minority status to be considered as a contributing factor in state employment, contracting and admission to public colleges in universities.

An initiative to slash car-tab fees passed with 55.07% of the vote as of Wednesday afternoon.

Initiative 976 will lower most taxes paid through annual vehicle registration to $30 and largely revoke the authority of state and local governments to add taxes and fees without voter approval.

The measure will also repeal taxes and fees already in place, potentially costing the state and local governments more than $4 billion in revenue over the next six years, according the state Office of Financial Management. 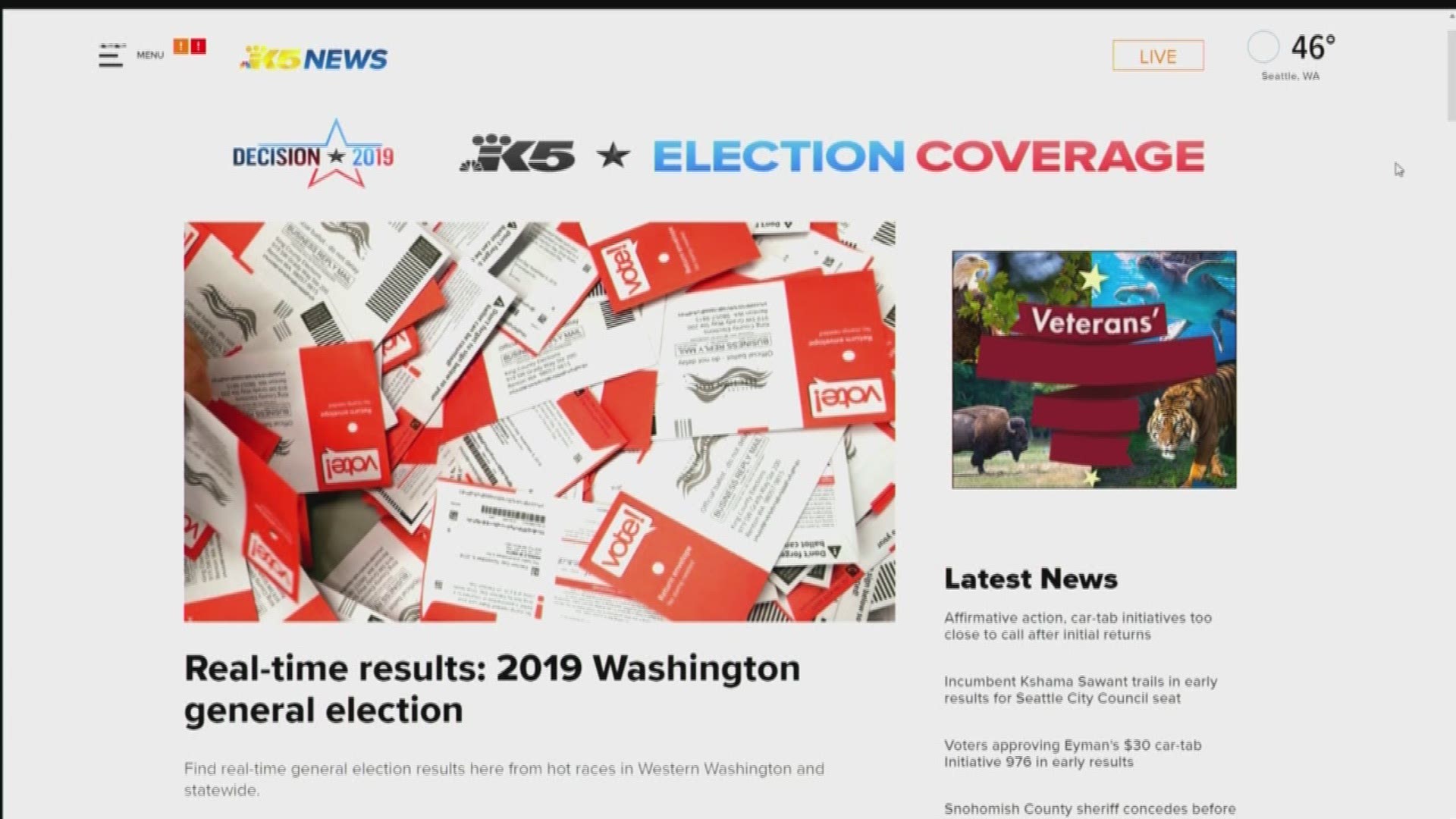 A number of city and council positions are also up for grabs, including four on the King County Council, seven on Seattle City Council, and four on Tacoma City Council.

Four King County Council positions are up for grabs during the 2019 General Elections.

In the District 4 race, incumbent Jeanne Kohl-Welles leads challenger Abigail Doerr with 74% of the vote.

In the District 8 race, incumbent Joe McDermott leads challenger Michael Robert Neher with 84% of the vote.

The race is on for seven Seattle City Council seats which could result in a major shakeup.

In the open District 2 race, Tammy Morales, a community organizer, leads Mark Solomon, who works in crime prevention with Seattle Police, with 60.32% of the vote.

Incumbent Kshama Sawant, who has served since 2014, faces off against Egan Orion, an event organizer and small business advocate for the District 3 position. Initially, Sawant was trailing Orion. As of Friday, she has taken the lead with 51.57% of the vote.

Shaun Scott, a community activist, and Alex Pedersen, the former legislative aide to former Councilmember Tim Burgess, vie for the open seat to represent District 4. Pedersen leads Scott with 52.34% of the vote.

In District 5, Attorney Ann Davison Sattler trails incumbent Debora Juarez, who was elected in 2015. Juarez has captured 60.53% of the vote so far.

Deputy City Attorney Andrew Lewis, squares off against former Interim Seattle Police Chief Jim Pugel for the District 7 position. Pugel held a slim lead over Lewis, capturing 59.83% of the vote as of Wednesday.

See the "Drinks with Daniels" series below:

In Position 3, Councilmember Keith Blocker holds a 63.22% lead over challenger David Combs, who runs an organization that provides internships to young people. Position 3 is a district-specific seat covering the Fircrest, Central Tacoma, and Hilltop neighborhoods.

In at-large Position 8, Kristina Walker, executive director of Downtown On the Go, leads John O'Loughlin, a utility executive and environmental engineer, with 58.18% of the vote.

After early results were released Wednesday evening, Fortney led Trenary with 58.87% of the vote.