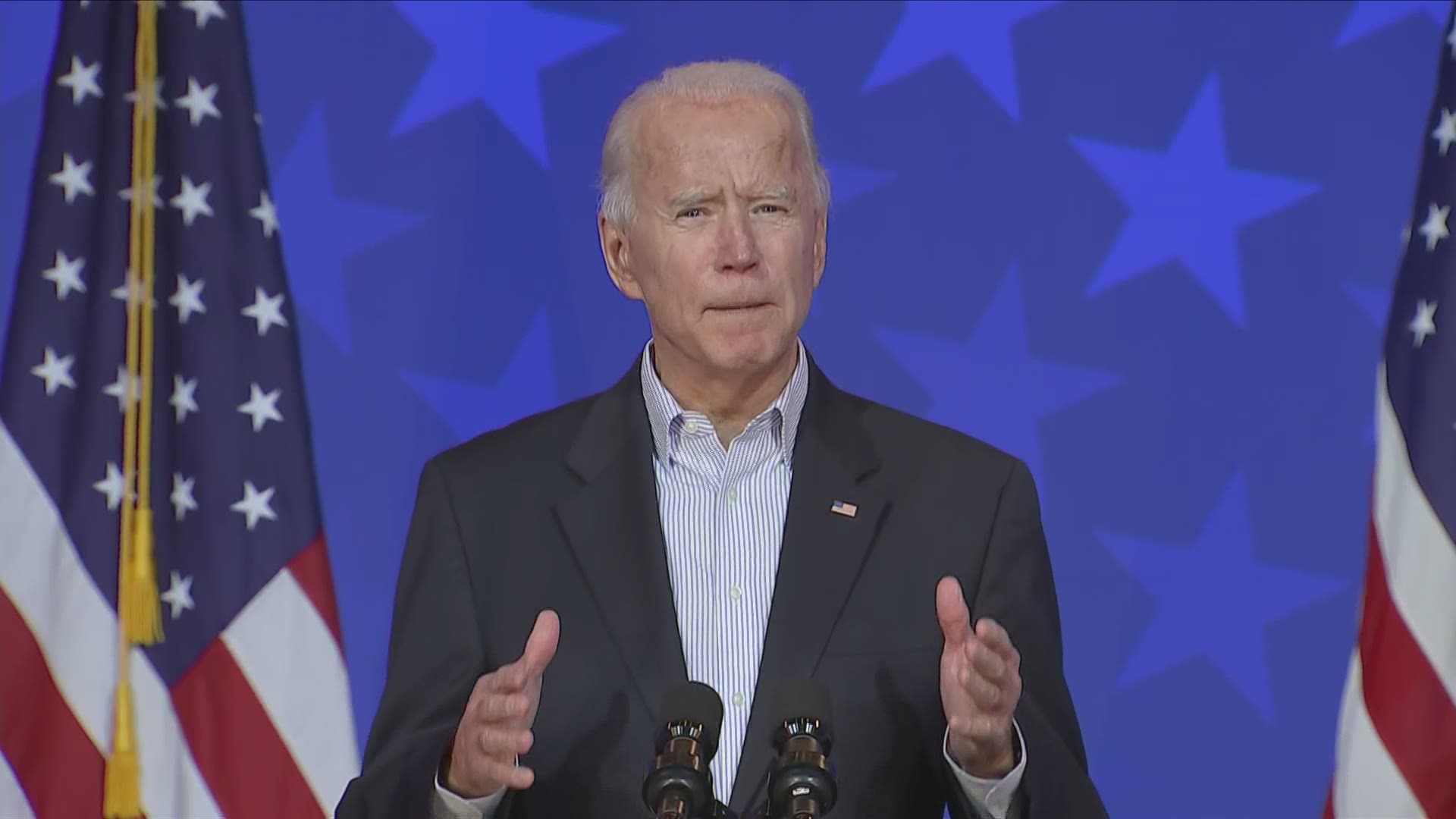 WASHINGTON — With votes still being counted across the nation, President Donald Trump on Thursday sought to undermine confidence in the nation's election, making unsupported accusations from the White House about the integrity of the results in his race against Democrat Joe Biden.

Hours earlier, Biden offered reassurances that the counting could be trusted, projecting a more presidential appearance while urging patience from Americans.

The candidates' sharply contrasting postures intensified a national moment of uncertainty as the nation and the world waited to learn which man would collect the 270 electoral votes needed to capture the presidency. Trump pursued legal options with little success, working the phones and escalating efforts to sow doubt about the outcome of the race.

His path to victory narrow, Trump pushed unsupported allegations of electoral misconduct in a series of tweets and insisted the ongoing vote count of ballots submitted before and on Election Day must cease. And in his first public appearance since late on Election Night, he amplified the conspiracy theories amid the trappings of presidential power.

He made similar claims about election integrity during the 2016 campaign, which he went on to win. This time, he was speaking not as a candidate, but as the sitting president of the United States.

Biden took a different tack, speaking briefly to reporters after attending a COVID-19 briefing to declare that “each ballot must be counted.”

“I ask everyone to stay calm. The process is working,” said Biden. “It is the will of the voters. No one, not anyone else who chooses the president of the United States of America."

Biden’s victories in Michigan and Wisconsin put him in a commanding position, but Trump showed no sign of giving up. It could take several more days for the vote count to conclude and a clear winner emerge.

With millions of ballots yet to be tabulated, Biden already had received more than 72 million votes, the most in history.

Trump's campaign engaged in a flurry of legal activity to try to improve the Republican president's chances, requesting a recount in Wisconsin and filing lawsuits in Pennsylvania, Michigan and Georgia. Statewide recounts in Wisconsin have historically changed the vote tally by only a few hundred votes; Biden led by more than 20,000 ballots out of nearly 3.3 million counted.

RELATED: EXPLAINER: Pivotal states still in play and what makes them that way

RELATED: Presidential Election 2020: Live results from across the US

Judges in Georgia and Michigan quickly dismissed Trump campaign lawsuits there on Thursday.

Biden has already won Michigan and Wisconsin. The contests in Georgia and Pennsylvania, along with Nevada and North Carolina, were tight with votes still being tabulated.

The Trump campaign said it was confident the president would ultimately pull out a victory in Arizona, where votes were also still being counted, including in Maricopa County, the state’s most populous area. The AP has declared Biden the winner in Arizona and said Thursday that it was monitoring the vote count as it proceeded.

“The Associated Press continues to watch and analyze vote count results from Arizona as they come in,” said Sally Buzbee, AP’s executive editor. “We will follow the facts in all cases.”

Trump's legal challenges faced long odds. He would have to win multiple suits in multiple states in order to stop vote counts, since more than one state was undeclared.

There were no obvious grounds for the Justice Department to attempt to intervene to stop a vote count at the state level, unless the federal government could somehow assert a violation of federal voting laws or the Constitution. The department could theoretically file a brief in support of a Trump campaign lawsuit if it believed there were federal concerns at stake, but that intervention would be extraordinary.

While Trump has insisted that ballot counting stop, it was unclear exactly what that would include. Counting for votes received by Nov. 3 was continuing, but roughly 20 states allow ballots to be counted if postmarked by Nov. 3 but received in the days after. In some states that is as long as nine days, or even longer. Some of the deadline changes were made as a result of the pandemic, but others are just routine parts of state election laws. Trump has fixated on Pennsylvania, where the Supreme Court refused to stop a court’s ruling that allowed for a three-day extension.

He also said he was taking fraud claims to court – but most of the lawsuits only demand better access for campaign observers to locations where ballots are being processed and counted. A judge in Georgia dismissed the campaign’s suit there less than 12 hours after it was filed. And a Michigan judge dismissed a Trump lawsuit over whether enough GOP challengers had access to handling of absentee ballots

Biden attorney Bob Bauer said the suits were legally “meritless.” Their only purpose, he said "is to create an opportunity for them to message falsely about what’s taking place in the electoral process.”

It was unclear when a national winner would be determined after a long, bitter campaign dominated by the coronavirus and its effects on Americans and the national economy. The U.S. on Wednesday set another record for daily confirmed cases as several states posted all-time highs. The pandemic has killed more than 233,000 people in the United States.

Beyond the presidency, Democrats had hoped the election would allow the party to reclaim the Senate and pad its majority in the House. But while the voting scrambled seats in the House and Senate, it ultimately left Congress much like it began — deeply divided.