Cory Booker holds Portland rally: 'This is an important state on a lot of levels'

The New Jersey senator said beating President Donald Trump should be the floor, not the ceiling for Democrats. 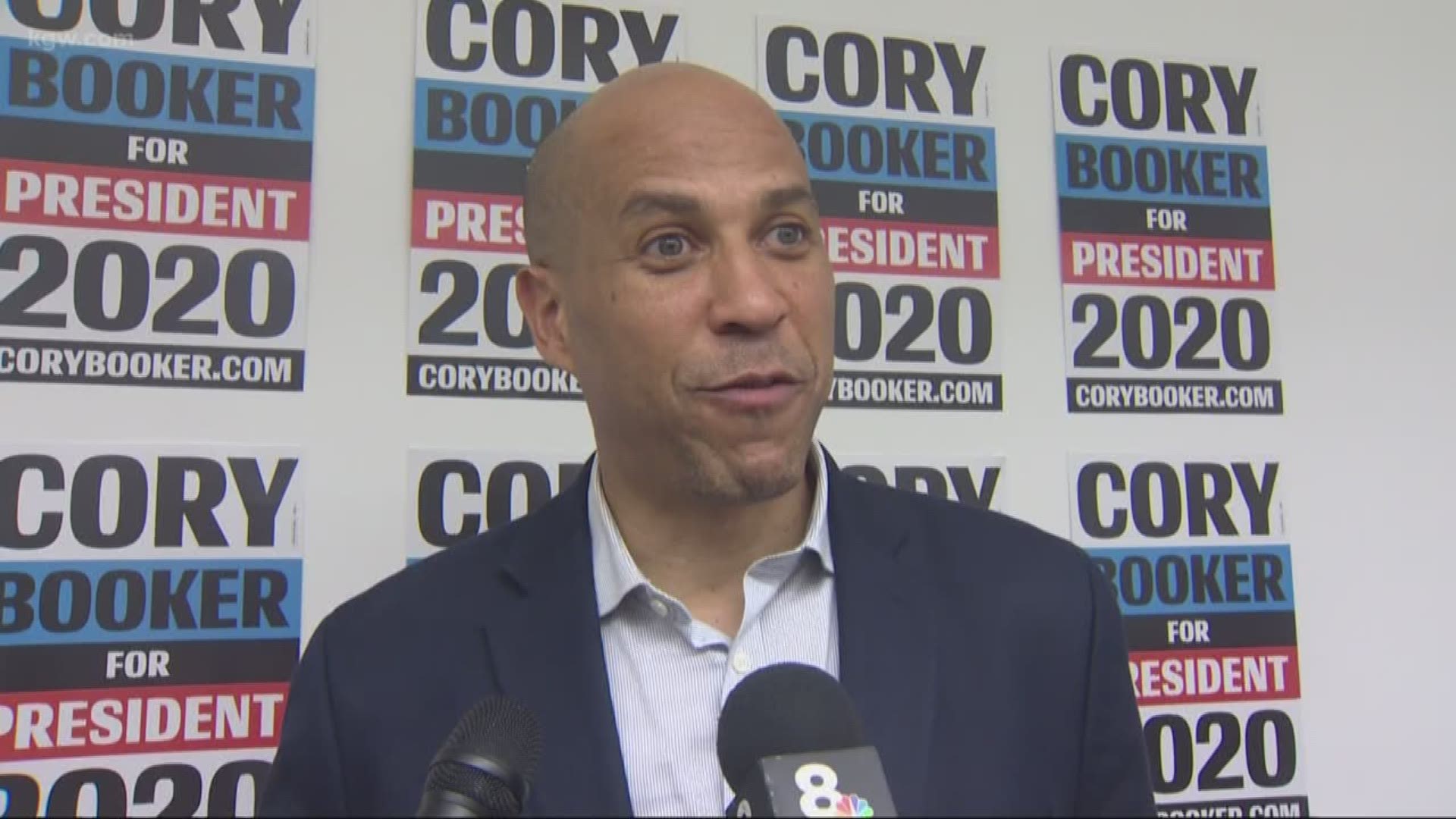 PORTLAND, Ore. — Democratic presidential candidate Cory Booker held a grassroots fundraiser in Portland on Sunday. People waited in line to get into the Riveter in Southeast Portland to listen to him speak at his nearly sold out event.

The senator from New Jersey said this is a moral moment for America and this election cannot be just about beating one guy. Booker said beating President Donald Trump should be the floor, not the ceiling for Democrats.

Booker played tight end at Stanford during the 1989 and 1990 seasons and said he remembers coming to Oregon to play the Ducks and Beavers.

"Portland is, as a guy who played football at Stanford, a city I came to a lot and got beat up on," he said. "So it's nice to come here and get a great reaction and get embraced a little bit."

On a political level, Booker said he believes Oregon could play an important role in the Democratic primary.

"Look, this is an important state on a lot of levels. This could be a long primary, [and] states like Oregon and states like New Jersey that are a little later, could actually become very important," he said. "So we wanted to have a rally, let people know why I'm running, what I'm about, and what our plan and pathway to victory is."

Booker also answered a question about the homeless crisis and said it's not just a local issue, but a federal one as well.

"I have a housing plan that helps people to prevent homelessness, to get a tax credit back from the government to stabilize their rents, that allows people who are going to housing court to have access to lawyers because that actually cuts eviction rates down dramatically," he said.

Booker referenced the beginning of his career, when after law school, he started a non-profit organization that provided legal services for low-income families. According to Booker's profile on the U.S. Senate website, the organization helped "tenants take on slumlords, improve living conditions, and stay in their homes." He said that experience provided him with valuable insight into the country's housing issues.

"I want to make sure we're putting a lot more resources into veterans issues, and veterans homelessness, supportive housing, special needs housing," he said. "As a guy who's been dealing with this issue, who started his career as a housing rights lawyer, this is something that I know distinguishes me in the field."

MORE: Who is Cory Booker?

At the event, Booker shared personal stories about his life and his parents' struggle to buy a home, saying they were turned away because of the color of their skin. He said the people who came together to help his parents back then are the reason he's able to run for president now.

Gun violence was also another big topic. Before the event, the senator met with students from March For Our Lives Oregon and during his speech pointed out how nothing has changed after multiple mass shootings.

Several people said they walked away feeling hopeful after the event.

"I think Cory is inspiring," said Anika Denali Luengo, who attended the fundraiser event. "He gives us a lot of hope for unity and that really gives a warm message that makes me excited."

"I loved it," said John Plombon, who was also in attendance. "I liked how he spoke from his heart and told stories about his own personal experience in life and his own struggles, and what he's going to do to try to change things."

The Republican National Committee also released a statement about Booker's visit to Portland.

“During Booker's tenure in Newark, violent crime rose, he championed stop-and-frisk searches, and there were instances of police brutality in the city," said RNC spokesperson Samantha Zager. "With a record like that, no Oregonians will allow Booker to lecture them on morality and electability."

Booker said he is planning to come back to Portland in the future.