Protesters gather for a ‘reopen Oregon’ rally in Salem

People gathered at the Capitol, rain alternately pounding and drizzling, many attendees waving signs like “Reopen Oregon," “Open schools” and “no more masks." 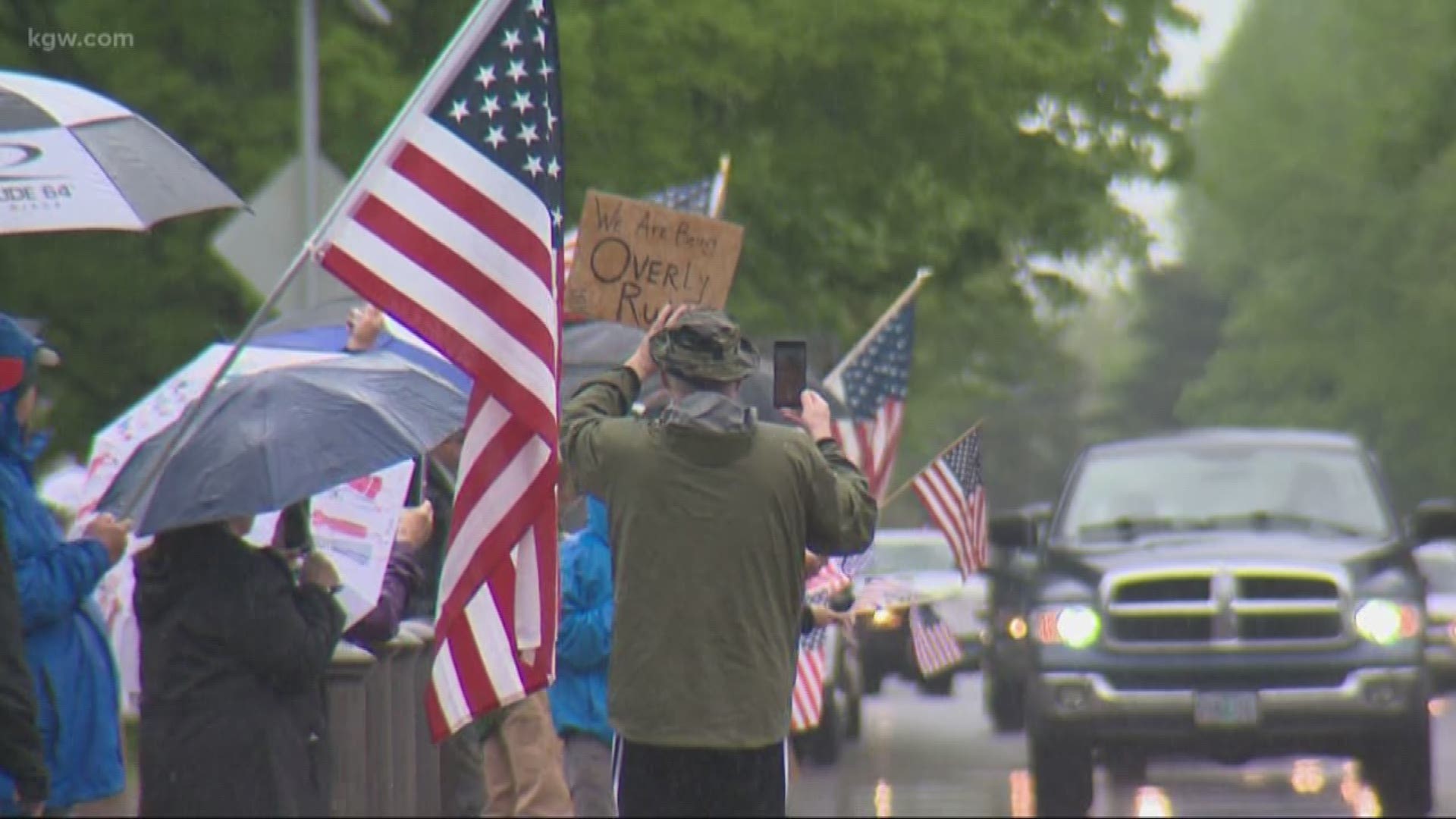 SALEM, Ore. — Demonstrators flocked to the state Capitol on Saturday, the latest in a series of national protests demanding governors ease social distancing restrictions meant to curb the spread of the novel coronavirus.

A few hundred folks gathered in front of the Oregon State Capitol, rain alternately pounding and drizzling as many attendees waved signs with slogans like “Reopen Oregon," “Open schools” and “no more masks.” Other demonstrators waved the U.S. flags or “Don’t Tread on Me” flags, while others waved banners reading “Trump 2020.”

Organizers of Oregon’s demonstration told The Oregonian/OregonLive they view the social distancing mandates issued by Gov. Kate Brown as government overreach. Since mid-March, Brown’s orders have shuttered many businesses, put some parks and campgrounds off limits and required public schools to adopt distance learning programs.

Some of the rally-goers wore face masks but the vast majority did not.

The reserved parking lot in front of the building was packed for much of the three-hour event. A sizable crowd formed across the street between the Department of Education headquarters and state library building as country and hard rock music blasted from tents and horns blared from a non-stop parade of vehicles circling the block.

Nods to conspiracy theories and fringe websites peppered the crowd. One attendee held a sign accusing the U.S. government and pharmaceutical companies of preparing a “mass vaccination campaign."

About an hour into the rally, many rain-soaked protest signs were practically illegible as they bled black and red ink. The Oregon rally was devoid of the scenes that went viral during similar protests across the country.

A group of healthcare workers stood atop the Capitol steps, holding signs that urged a phased plan to ease the state’s social distancing requirements. One woman, who declined to provide her name, said she wanted the state to ensure it can provide medical workers with personal protective equipment and also properly trace contacts of those who tested positive for the novel coronavirus.

The healthcare workers were largely ignored by demonstrators, who largely kept to the foot of the Capitol steps, but a few rally-goers harangued them.

Cheryl Greenlee of Salem said she attended Saturday’s event to support of the message rally organizers had set forth: ease social distancing restrictions and allow businesses to reopen.

She’s retired and, until last month, volunteered to maintain the Riverfront Carousel just blocks from the Capitol. She said the governor’s orders have had a harsh impact on the city’s senior citizens, who regularly visited the carousel.

“For some of those people, it’s their only social contact,” she said. “It’s time to be smart — and I really want us to do this smartly — and let businesses start reopening.”

Annya Gostevskyh, 19, said she didn’t understand why the governor’s order mandated healthy people, rather than those most at-risk, to shelter in place.

“If you feel good and normal, you should be able to do as normal,” she said.

The Salem resident runs an online CBD oil shop, Blessed Beyond Naturals, with her mother and said the social distancing orders haven’t affected her bottom line much.

Ellifritt told The Oregonian/OregonLive earlier in the week he hoped attendees would maintain a safe distance during the rally, but a crowd clustered closely in front of a white tent at the foot of the Capitol steps as a series of speakers took the mic.

Though event organizers insist the rally wasn’t political, vehicles, signs and apparel largely expressed support for the president. One group set up a tent to collect signatures in an effort to recall Brown.

The Oregon arm of Women for Trump organized caravans, some originating from as far as Medford.

The first round of speeches largely echoed rallying points set out by Oregon Uniting For Liberty, the month-old organization behind the demonstration. Speakers claimed Gov. Kate Brown lacked the authority to issue orders she laid out in mid-March banning groups of 25 or more from gathering if they could not keep six feet apart at all times and, later, shuttering public schools across the state.

Nations was once a fixture of right-wing rallies in Portland organized by Vancouver, Wash.-based Patriot Prayer.

“I’m sick and tired of communists ruining our state and ruining our country,” he said, railing against the supermajority Democrats hold in both legislative chambers in Salem and the majority they hold in the U.S. House.

Patriot Prayer founder Joey Gibson also made an appearance, saying in a speech that Oregonians should be allowed to return to work. He lives in Vancouver.

Brown on Friday unveiled several new initiatives to ease restrictions designed to slow the spread of the virus, which include testing 10,000 asymptomatic volunteers for coronavirus, coordination between six hospital systems and allowing rural counties to reopen some businesses so long as they submit locally supported plans to the state.

Demonstrators railed against mandates that are by and large popular in Oregon.

DHM Research, a Portland-based firm, found that some 82% of Oregonians support Brown’s stay-home orders. That includes 95% of Democrats and 72% of Republicans.

Saturday’s protest followed a smaller rally that drew dozens to the Capitol steps Friday, according to The Salem Reporter.

Eder is The Oregonian’s education reporter. Do you have a tip about Portland Public Schools? Email ecampuzano@oregonian.com.

RELATED: Portland Whole Foods employee speaks out for those too fearful to come forward