As Portland voters mull whether to fund a $790 million Portland Public Schools bond amid administrative scandals, resignations and a superintendent search that has no end in sight, students at the district’s highest-performing high school say their voices are missing from the discussion.

The historically large bond would fund the rebuilding of four Portland schools: Benson, Madison, and Lincoln high schools, and Kellogg Middle School, along with health and safety upgrades district-wide. PPS says Lincoln needs to be rebuilt primarily because of overcrowding – about 1,700 students attend a school originally built for 1,000.

The bond measure is the biggest ticket item in the May 16 Multnomah County election. If passed, it will cost the average homeowner about $280 per year for the first four years and less after that, with an average of $136 annually over 30 years. Voters have until Thursday to mail their ballots, or until Tuesday at 8 p.m. to drop them off at an approved ballot drop site.

May election: School bond, short-term rental tax up for vote

Students at Lincoln say voters may not understand the issues they encounter on a daily basis.

And there are a lot of issues. Dripping ceilings, with dumpsters catching falling water in bathrooms. A sign in the janitor’s closet, warning of exposed asbestos. Blocked-off water fountains. Students taking classes in a former fallout shelter, in classrooms with no windows or ventilation. A cafeteria that seats just 10 percent of the student population.

Ioffe approached KGW, offering a tour of Lincoln High School, where graduation rates topped 94 percent last year despite the building’s problems. If the bond passes, Ioffe will be long gone – he’s headed to Babson College near Boston after taking a gap year to work on his global nonprofit, TILE. But the student advocate, who produced a pro-bond video with three other Lincoln students, says replacing schools is critical to the health of future PPS students. 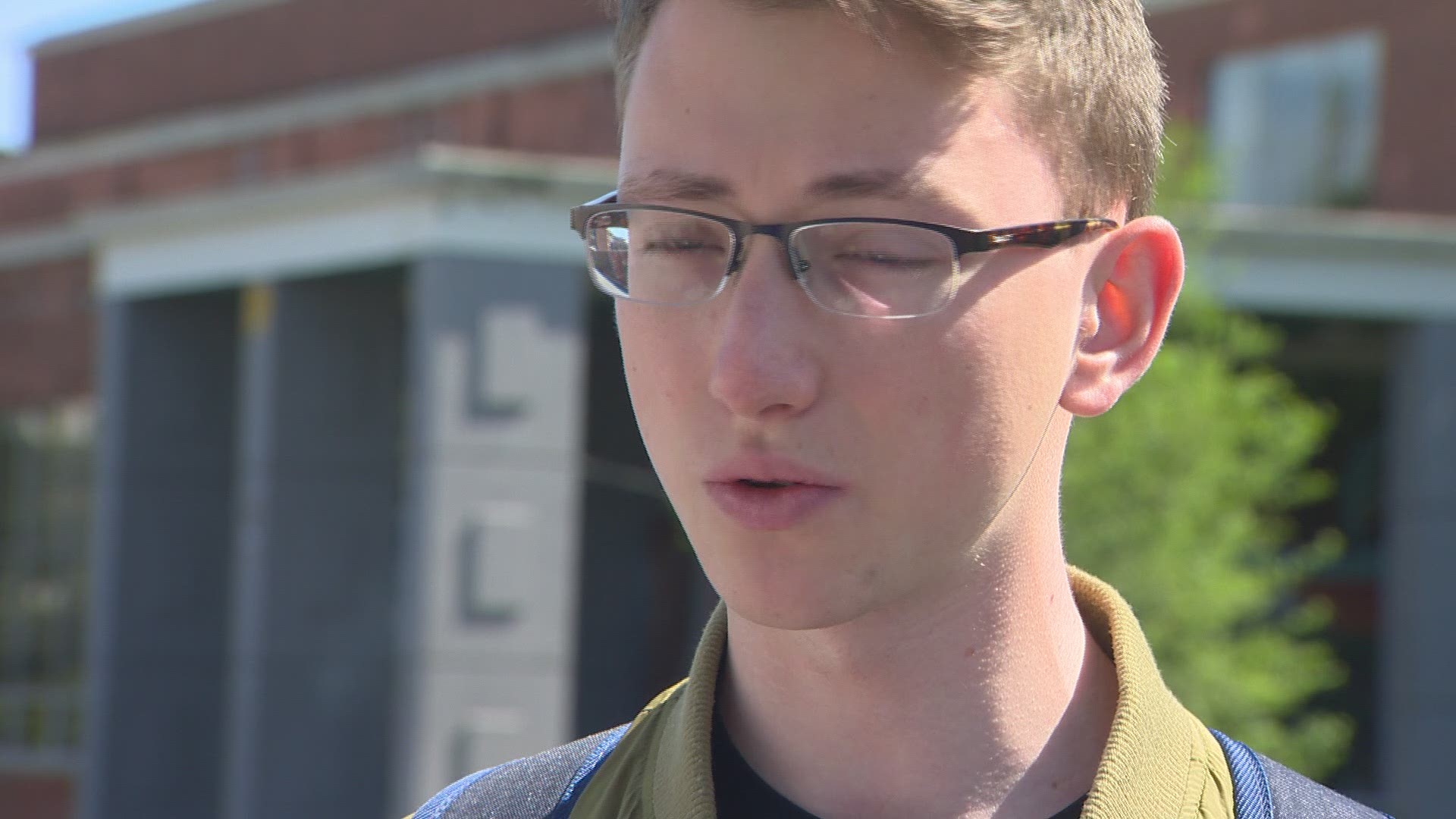 While there is no organized opposition to the bond, critics of PPS question whether voters should fund the bond now or wait until the district rebuilds its struggling administration. Others say Lincoln, which was built in the 1960s, doesn’t need help as much as some older schools.

The bond would rebuild Lincoln and Kellogg Middle School and renovate Benson and Madison high schools. Benson was built in 1917 of unreinforced masonry and could collapse in an earthquake. Kellogg was shut down a decade ago and reconstructing it would help alleviate overcrowding at middle schools district-wide. Madison was constructed in 1957 and the district says it's issues are much like Lincoln's in that they lie deep within the structure, but Madison doesn't require a full rebuild.

“We have a lot of schools that are overcrowded. Overcrowding is not necessarily a reason to rebuild a school,” said economist and PPS parent Dr. Eric Fruits.

Fruits said Lincoln students who live in some Northwest neighborhoods could attend the newly rebuilt Roosevelt High School in North Portland – if the district would just redraw boundary lines.

“I don’t think Lincoln has made the case that Lincoln is uniquely in worse shape than other schools,” he said. “It seems to be driven more by the fact that people who live on the Westside do not want to send their kids to Roosevelt.”

Lawyer and longtime PPS critic Kim Sordyl said she doesn’t question the need for a new Lincoln High School, but she does think now is not the time to fund it.

“The district is in complete crisis mode right now. It’s basically on fire. I don’t think it can properly handle managing the $790 million bond,” she said. “I think we need to get our house in order first and we need to show our community we are a functioning school district and go for a bond in November.”

But students at Lincoln say the time to act is now.

On Tuesday, Ioffe, along with 18-year-old Riley Wilson and 17-year-old Lux Preciado-Solis, showed KGW some of the structural problems students encounter on a daily basis.

What does an extra 700 students in a high school look like? At lunchtime, it looks uncomfortable. The narrow Lincoln High School cafeteria only seats 90 students – a result of the district building more classrooms within the former cafeteria space to accommodate a growing student body. That means about 1,600 students have few options for seating.

“During lunch, all Lincoln students sit on the floor – except for the 90 that fit into the cafeteria,” Ioffe said.

Credit: KGW
A dumpster catches leaks from the ceiling in the freshmen girls' bathroom

Yellow circles of water damage can be seen on many of the ceilings in Lincoln High School. In the freshmen girls’ bathroom a dumpster sits under a group of yellow stains to catch leaks.

“It’s been there since freshmen year,” said Preciado-Solis of the dumpster. “There’s this big bin and it’s just been dripping these last three years.”

Classes in a fallout shelter

Credit: KGW
A sign for the former fallout shelter in the Lincoln High School basement

With limited space for too many students, every square inch of Lincoln High School is utilized. That means the former basement fallout shelter – built as a safe space during a nuclear attack – is now full of classrooms. Many spaces don’t have windows or proper ventilation and box fans sit outside of classroom doors to move hot air out.

“Because there’s no natural ventilation [classroom temperatures] go up to 102 degrees and there’s nothing we can do about it,” Ioffe said.

Unlike nearly all other spaces at Lincoln, the student body actually fits into the gymnasium. But there’s only one gym – which means it’s full of students practicing for various events long before and after the school day takes place.

Credit: KGW
Students replace water jugs, as all drinking fountains are blocked off due to lead contamination

Like all other PPS schools with elevated lead levels, Lincoln students don’t have access to water fountains and cafeteria workers have to use bottled water to cook food. Students drink from paper cups, with water dispensed from five-gallon tanks. Students have to change the heavy tanks themselves. In the basement, dozens of water tanks are stacked in any available space.

Credit: KGW
A sign warning of asbestos in the janitor's closet

District officials have long known about asbestos issues at many Portland schools. At Lincoln, there’s a sign in the janitor’s closet that warns of asbestos in the pipes, boiler and tank insulation. “Cancer and lung disease hazard,” it says.

“These issues can affect students for essentially their entire lifetimes and could lead to complications that could lead to death,” Wilson said.

The students at Lincoln say they understand why Portland voters would be apprehensive to support a bond led by a struggling administration, but they believe the benefits outweigh the costs.

“As students it is difficult to learn in a facility where your health is constantly being harmed and where your classrooms are ridiculously overcrowded,” Ioffe said. “If we want our students to succeed we have to give them the tools to succeed and the facilities are a major part of that.”