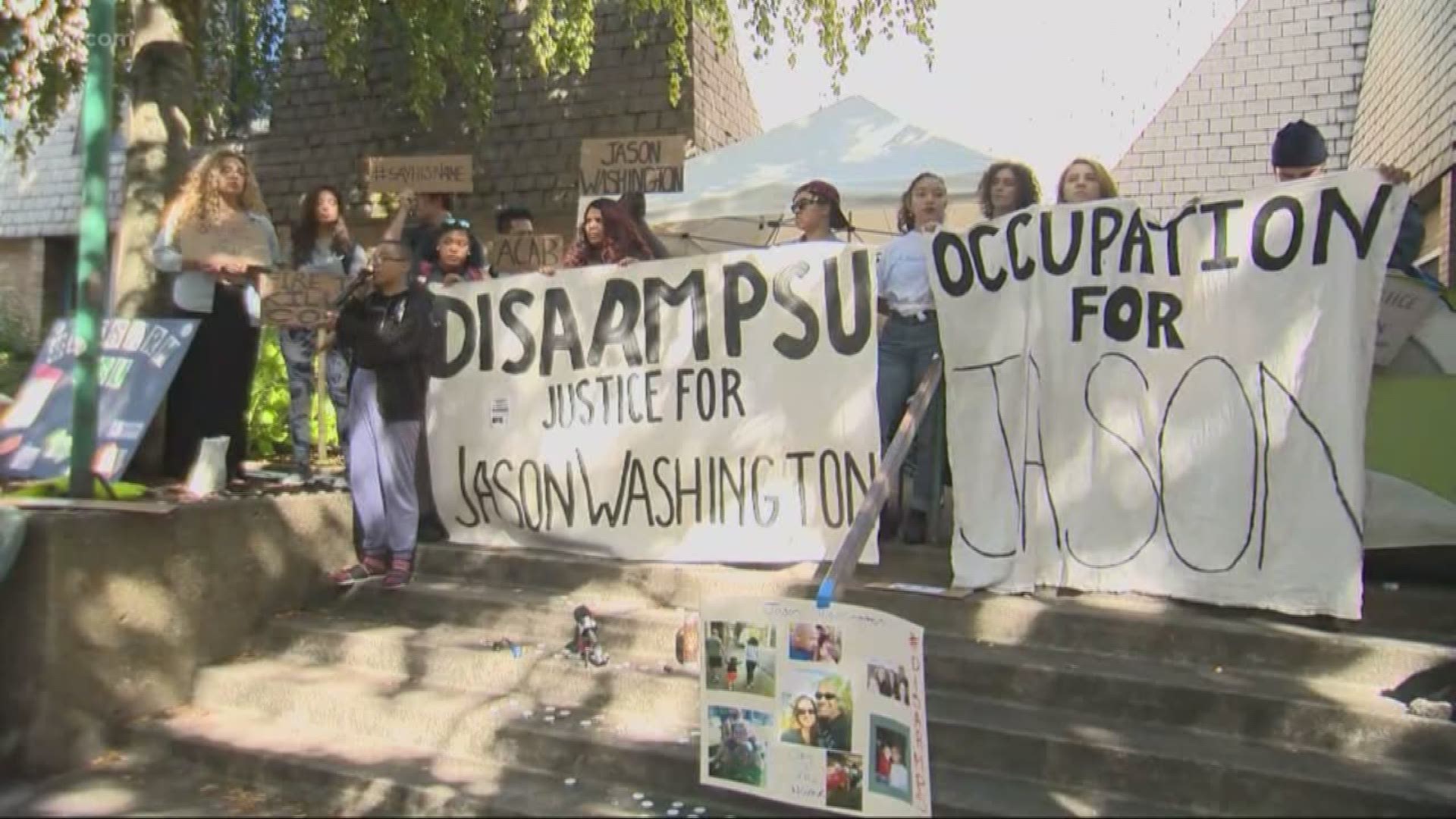 PORTLAND, Ore. — According to a grand jury transcript released Tuesday, testimony from a Portland police officer indicates Jason Washington pointed his gun toward officers and civilians before he was shot and killed by Portland State University police earlier this year.

Jason Washington, 45, was shot and killed June 29 while witnesses said he was trying to break up a fight near the intersection of Southwest Broadway and College Street. Washington, who had a concealed carry permit, was carrying a gun at the time and the weapon fell from his holster, landing on the ground. When he reached to pick it up, the officers shot him, witnesses said.

The grand jury, after two days of testimony in hearing, found that officers James Dewey and Shawn McKenzie acted in self-defense, or in the defense of other people, when they shot Washington.

Anthony Eugenio, a Portland police officer who analyzed the body camera footage on both Dewey and McKenzie, testified Washington was pointing his gun in the direction of the officers and "some other civilians" just before he was shot.

Eugenio explained to the court that he came to the conclusion after stitching together the video from both officers' body cameras, slowing down the frames and lightening the video.

He told the grand jury he thought Washington was about to start firing. "There's no reason to be pointing a gun at somebody on a city street in the middle of the night, so my thought was, 'He's going to start shooting people.'"

Officer McKenzie told the grand jury Washington was extending the gun and pointing it toward him and Officer Dewey, but he couldn't tell who the gun was aimed at.

Both officers said they told Washington to drop the gun multiple times prior to the shooting.

WHAT HAPPENED BEFORE THE SHOOTING?

A Portland police detective testified Washington, along with two other friends, had been out in downtown Portland throughout the day Thursday, watching the Oregon State University baseball game. The group went from Cheerful Tortoise, to Buffalo Wild Wings and then to Rialto Pool Room.

They eventually made their way back to Cheerful Tortoise, where Washington and his friends got into an altercation with another group.

The fight eventually spilled outside during the early morning hours of Friday, June 29.

Both officers testified they had arrived to a chaotic scene, with at least half a dozen people fighting among each other. One person at the scene told an officer someone in the group had a weapon.

Officer Dewey testified at least a handful of men in the group were fighting when four of them fell to the ground. He said at that point, he noticed the gun was no longer in Washington's holster, but in his hand.

Representatives from PSU released the following statement about the transcript:

Portland State has hired separate consultants OIR Group and Margolis Healy to review the June 29th fatal officer-involved shooting and conduct a comprehensive review of campus safety. The transcript from the Multnomah County Grand Jury proceedings and the Portland Police Bureau investigation will be part of those reviews.