Dozens of people outside the 1a category have reached out to KGW or posted on social media that they have been able to get the vaccine in Salem too. 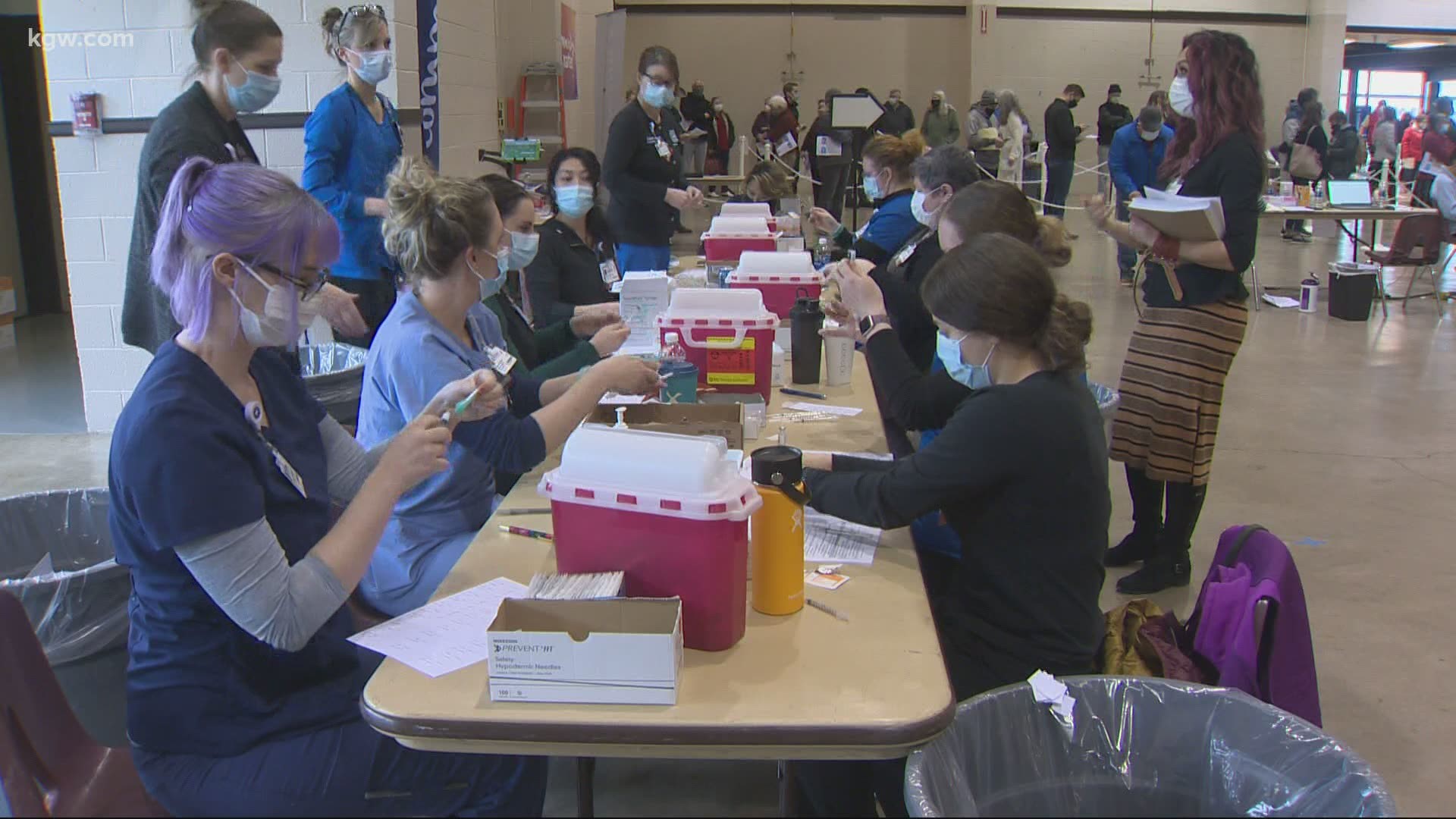 SALEM, Ore. — The mass vaccination clinic in Salem, run by Salem Health and the National Guard, is supposed to be for people in Oregon's 1a group: health care workers, caretakers and people who live or work in long-term care facilities.

Dozens of people outside the 1a category have reached out to KGW or posted on social media that they have been able to get the vaccine in Salem too.

Brian Hines lives in Salem and saw posts on Facebook from people outside of 1a who got the shot.

Hines, who wrote about his experience on his blog, said he and his wife signed up online. His wife told the National Guard member who they were and how they signed up. They were waived through and got the vaccine that day.

“We answered all the questions, filled out the forms, you know, so everything was done by the book. It just wasn't by the book, according to Gov. Brown and the Oregon Health Authority's 1a priorities,” said Hines.

While Salem Health is explicit on its website that only people in 1a should go there to get the vaccine, the clinic does not require any ID to prove they qualify.

RELATED: VERIFY: People who live and work in Oregon should not get the vaccine in Washington

Salem Health spokeswoman Lisa Wood said in an email some vaccines have been given to people outside of the 1a group instead of throwing away doses, but she doesn't know how many.

She said the self-attest system relies on the integrity of Oregonians to honor phasing guidelines.

Salem Health is adhering to OHA’s guidance on phasing and attestation. We are asking individuals seeking vaccinations to self-attest to their eligibility. Due to self-attestation, we cannot quantify the number of people who may have fallen outside of the current OHA Phase 1a tier.

Courtney Campbell is the director of the medical humanities program at Oregon State University. He said this priority system won't work if it's not strictly enforced.

“You don't want to have people sort of jumping the queue because then, you know, people will feel resentment about not being able to access this particular facility, or they may feel that someone else is getting an unfair advantage over them,” said Campbell.

Campbell said the same goes for all the people in Oregon who want to drive to Washington and get the vaccine.

Seniors have reached out to KGW asking if they can cross the border and get the shot. Washington state health officials have said don't do this.

Campbell said states were given vaccines based on population, and going to another state messes up the system.

“It's a very scarce resource that's lifesaving, and so it can't just be every person for themselves," said Campbell. "We need to really band around the common popular culture phrase, ‘we're in this together.' And being in this together means looking at the common good, not 'how I can best get advantage.'"

While there is an enormous pressure to get shots in arms and not waste doses, Campbell said there should be equal pressure for people to wait their turn.

Hines has no regrets but said the system does seem unfair.

“I'm happy I got the COVID shot, but there's a little bit of a feeling that there was some unfairness to it, which took some of the pleasure away for me,” said Hines.

Read the full statement from Salem Health below:

As of Tuesday, January 19, the vaccine clinic has administered more than 20,000 doses. This total represents ten (10) days of operation.

Salem Health is adhering to OHA’s guidance on phasing and attestation. We are asking individuals seeking vaccinations to self-attest to their eligibility. Due to self-attestation, we cannot quantify the number of people who may have fallen outside of the current OHA Phase 1a tier. The self-attestation process relies on the integrity of Oregonians in determining if and how they are eligible under the current guideline.

The vaccine clinic is currently accepting those in the OHA Phase 1a tier who live or work in Marion County. In addition, Marion County Health & Human Services received a waiver that now allows the clinic to vaccinate K-12 teachers, school personnel, early learning employees (including child care), for those who live or work in Marion County, or work for Salem-Keizer Public Schools. Educators are required to show proof of employment in this eligibility category. If individuals are not in either the OHA Phase 1a or Marion County/Salem-Keizer Public Schools categories, they should wait until their group is indicated.

Schedules change daily depending upon vaccine supply and demand. Check www.salemhealth.org/vaccine-clinic daily for updates on dates, hours and who is eligible to receive the vaccine based on OHA guidelines.

Do you have a question about the vaccine process or a story idea? Email us at CallCristin@kgw.com