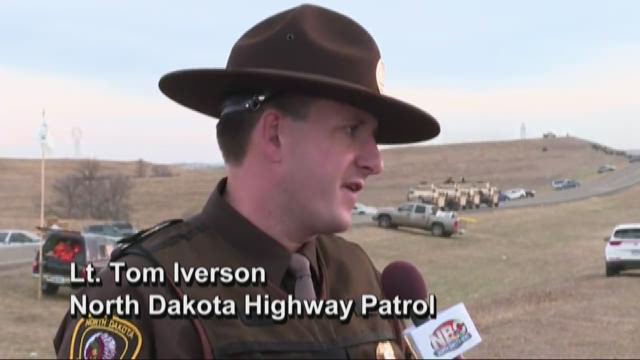 There's a mysterious plane and helicopter circling over the camp at Standing Rock in North Dakota, where police and activists have been locked in a showdown over the Dakota Access oil pipeline for months.

It's unclear who sent the plane or its purpose — but those on the ground believe it may be flying overhead to interfere with connectivity.

"We don't know what it does. Some posts have been blocked from being posted on Facebook. Some live feeds have been disrupted. I know one woman's phone completely crashed while she was at the front line and it doesn't work anymore. She had valuable videos on her phone," Marilyn Fox, 18, a member of the Standing Rock Sioux Tribe told NBC News.

Questions of surveillance have circulated at the camp. Protesters call themselves water protectors, because the pipeline would be built beneath the primary water supply of several tribal communities and cities downstream.

These water protectors say they've had trouble getting connectivity and are also aware of allegations police may be targeting protesters who are checked in via Facebook.

1 / 25
<p><span style="color: rgb(26, 26, 26); font-family: "Helvetica Neue", Helvetica, Arial, sans-serif; line-height: 18px;">Flags of  tribes from  the US and Canada line the entrance to an encampment near Cannon Ball, North Dakota where members of the Standing Rock Sioux Tribe and supporters gathered to oppose the Dakota Access Pipeline.  ROBYN BECK/AFP/Getty Images)</span></p>

Nathan Wessler, an ACLU staff attorney who specializes in technology and privacy, said he "doesn't know for sure whether law enforcement or the landowner is using technology that could surveil or interfere with phone networks, but we have heard from some activists on the ground who have said their phones are behaving strangely."

NBC News producer Chiara Sottile, who is at Standing Rock, reported interference in microphones she was using for an interview as the plane circled above on Sunday. Such interference could have been caused by other factors as well.

Wessler said there are a few different technologies that law enforcement could use to scramble phone networks, including technology such as cell site simulators and phone jammers. However, he also said the reports in North Dakota could also be caused by over saturated cell network.

The ACLU has outstanding requests with local law enforcement and government agencies for public records concerning North Dakota and the use of this technology, he said.

"It's almost as if they've figured out that's how we're getting the word out about what's going — about what's truly going on here," Fox said. "So they're doing their best to prevent that from happening, because they know the truth isn't being spoken about on local media."

"The Morton County Sheriff's Department is not and does not follow Facebook check-ins for the protest camp or any location," said Kirchmeier.

For Dallas Goldtooth, whose Facebook Live videos have routinely garnered hundreds of thousands of views throughout the standoff, the reports that the Morton County Sheriff's office was possibly monitoring his or others' Facebook activity was "completely unsurprising."

"Every one of us who's utilized social media to broadcast online has been targeted," Goldtooth, an activist with the Indigenous Environmental Network, told NBC News.

Goldtooth said the Facebook "check-in" campaign was "an innovative way to keep folks engaged in our struggle" but, he countered, "we understand it's not a game changer, though."