The demonstrations dubbed 'March to the Polls' are follow-ups to the Women's March movement following President Trump's election victory.

CHICAGO — Balloons depicting President Donald Trump as a baby hovered over thousands of sign-holding activists in downtown Chicago Saturday who hoped to send a defiant message to Republicans ahead of next month's midterm elections.

The demonstration, dubbed “March to the Polls,” was the first of more than a dozen planned across the nation ahead of next month's elections, where Democrats aim to gain control of Congress.

The gatherings are follow-ups to the Women’s March movement sparked by Donald Trump’s presidency. Those marches drew hundreds of thousands to rallies in every state and more than 30 countries to denounce the administration.

The several thousand who rallied Saturday didn't meet the 350,000 originally projected by organizers. Protesters brought along signs and chanted "dump Trump" in the heart of the city as several candidates, who set up booths at the event, pitched their platforms and recruited volunteers.

One candidate, Ja’Mal Green, who is running in February’s non-partisan mayoral election in Chicago, even set up a punching bag with a photo of newly confirmed Supreme Court Justice Brett Kavanaugh on it. The left-leaning crowd was invited to use the bag to release their frustration.

The rally drew speakers from across the nation, all with motivating messages of why voting matters more than ever.

"In a society that tries so, so hard to suppress our voices, the act of simply going out and voting is an act of resilience and resistance," Lauren Hogg, a survivor of February’s mass shooting at Marjory Stoneman Douglas High School in Parkland, Florida told the crowd.

Credit: KAMIL KRZACZYNSKI/AFP/Getty Images
Women gather for a rally and march at Grant Park on October 13, 2018 in Chicago, Illinois to inspire voter turnout ahead of midterm polls in the United States.

Some at the march said they feel desperate to see Democrats win in November and become a more meaningful check on Trump. But they acknowledged that polls that show Republicans gaining ground in Senate battles following the Kavanaugh confirmation have left them frustrated.

Organizers put a special emphasis on turning out the youth vote. Historically, participation among young voters is weak in midterm elections. In 2014 elections, about 19.9 percent of 18-to-29-year-olds cast a ballot, marking the lowest youth voter participation in 40 years.

Amani Johnson, 20, an anti-violence activist with the Chicago youth group B.R.A.V.E., told young voters that they need to do their part if they want to change American politics.

“We have no one to blame but ourselves because we don’t vote,” Johnson said. “Our lives are on the line.”

Heather Booth, the abortion rights activist who helped found the Jane Collective in the late 1960s when the procedure was illegal, told participants they are in a “time of great peril” but also one of inspiration.

“We are the future if you organize,” Booth said. “It’s been true in history, and it’s true now.”

Jane Christie, 63, made the 90-mile drive from nearby Iroqouis County, Illinois to be part of the march.

Christie said she was frustrated by the Kavanaugh confirmation process and that it brought up ugly memories of being harassed by boys and teachers during her high school days.

At home, she said she’s sparred with her husband, who she described as a Fox News-watching Republican, over the Kavanaugh confirmation. They’ve come to a sort of detente; Christie says her husband turns off the news network when she enters the room. 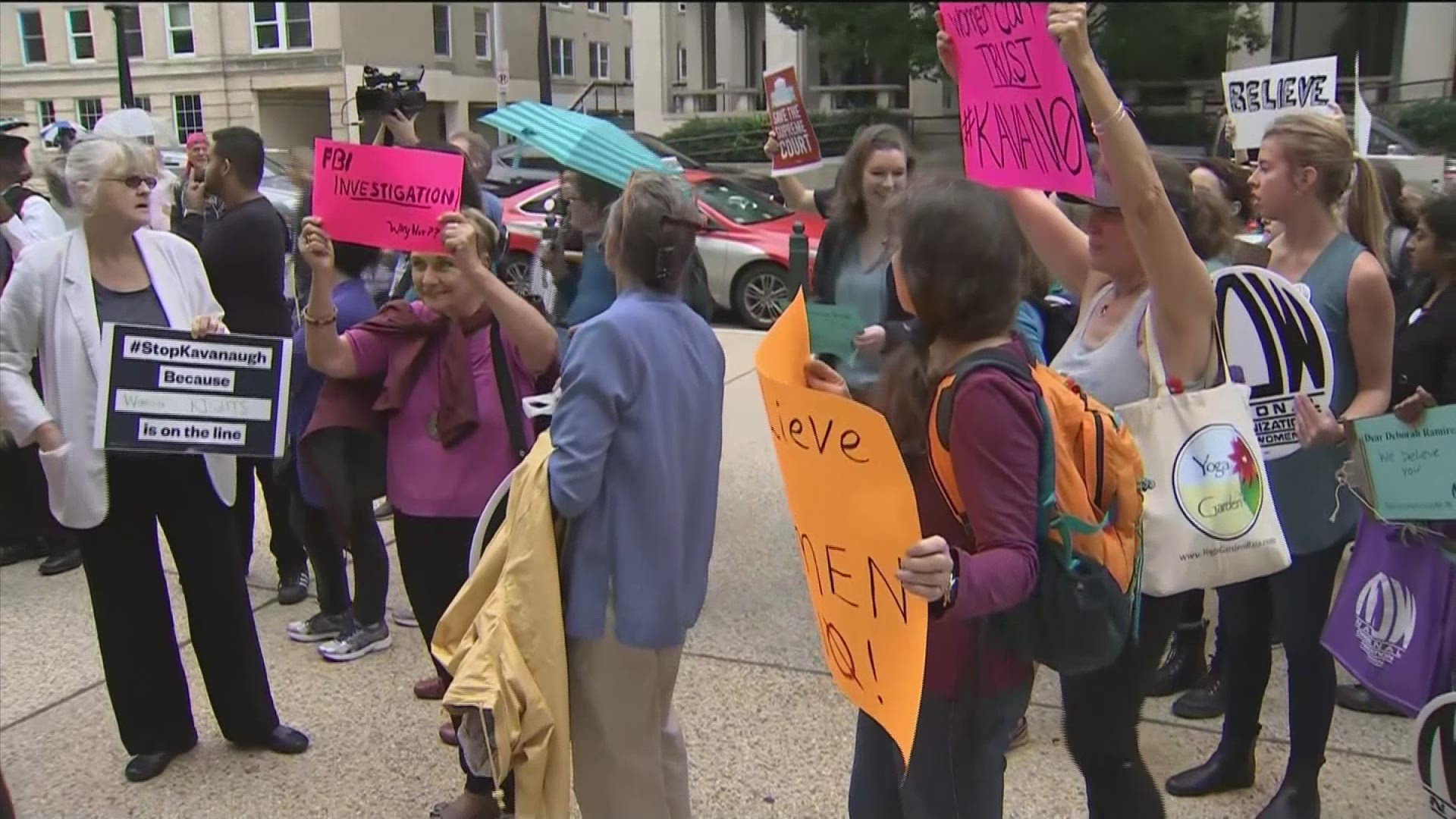 In recent weeks, she’s made a small donation to a Democrat running in a hotly-contested House race in the Chicago suburbs and she’s signed up to do phone banking on behalf of Democrats during the final weekend before next month’s midterm elections.

"I feel confident that the tide is turning but I also felt confident before 2016 and see what happened," she said. "I’m nervous."

Dee Dee McCarthy, 62, said she traveled from South Bend to express her anger with the Trump administration over Kavanaugh and tax cuts. But also to make amends.

McCarthy, who supported Sen. Bernie Sanders over Hillary Clinton in the 2016 Democratic presidential nomination fight, sat out the general election.

"I was so mad about how the Democratic Party treated Bernie that I refused to be part of it," she said. "I feel so much guilt for that. That’s why I am here."

The Women’s March organizers also held large rallies around the United States in January, near the one-year anniversary of Trump’s time in the White House, to demonstrate that resistance to the administration hadn’t ebbed.

This time, organizers for the rallies — the first of several that are planned for around the country in the coming weeks — said they want to use the moment to get women and their allies to the polls and bolster get-out-the-vote efforts before the midterms.

The Senate’s vote this month to narrowly confirm Kavanaugh to the Supreme Court after contentious hearings is energizing women to head to the polls, march organizers say. Kavanaugh was confirmed after facing allegations from Christine Blasey Ford that he sexually assaulted her at a house party when both were teens. The justice has denied the allegations.

“Kavanaugh’s appointment to the Supreme Court really underscored the tangible effects of electing people that don’t align with your values and ethical viewpoints," said Claire Delaney Shingler, executive director of Women's March Chicago. "People are looking backwards from (the Kavanaugh confirmation) and saying had the November 2016 election had a different outcome, this wouldn’t be happening."

Republicans, however, say that Kavanaugh was unfairly treated by Democrats. Anger over the confirmation fight is energizing voters on the right to head to the ballot box. Senate Majority Leader Mitch McConnell and other GOP officials predict that the Kavanaugh fight will help the GOP gain seats in the Senate and perhaps head off a “Blue Wave” in the House.

Some polling suggests that road has become more difficult for Democrats in the Senate.

Sen. Heidi Heitkamp, D-North Dakota, who opposed Kavanaugh’s nomination is trailing her Republican challenger, Rep. Kevin Cramer, 53 percent to 41 percent, according to a recent Fox News poll. Thirty-four percent of likely North Dakota voters surveyed before the Senate voted to confirm Kavanaugh said they were less likely to vote for Heitkamp if she cast a ballot against him, while 17 percent said they were more likely to vote for the Democratic senator if she voted against his confirmation.

In Tennessee, polls show Rep. Marsha Blackburn, a Republican, saw a surge in support in her race against Democrat Phil Bredesen as Kavanaugh's confirmation process played out in Washington. Bredesen, a former Tennessee governor, saw his support slip despite saying he supported Kavanaugh’s nomination.

In Nevada, incumbent Sen. Dean Heller, a Republican who has been locked in a tight race with Democratic Rep. Jacky Rosen, saw his poll numbers improve in the midst of Kavanaugh’s confirmation.

The march organizers have partnered with the group Swing Left, which is behind get-out-the-vote and fundraising efforts for Democrats in 84 House districts that were won by a margin of 15 percent or less in the 2016 election cycle. Forty-one of 84 candidates backed by Swing Left’s are women and 23 of those female candidates are taking on a male incumbent.

Democrats have to net at least 23 additional seats to win control of the House.

In Illinois, there are four hotly-contested House races where GOP incumbents are trying to fend off Democratic challenges. Participants at the Chicago march will be encouraged to get involved in those races as well competitive races in Wisconsin and Minnesota, organizers said.

The rally started at Grant Park in the heart of downtown and focused heavily on first-time voters. After the rally, organizers marched several blocks to a nearby early voting site where newly-registered voters could cast their ballots.

“Women have said no, we will not stand for this,” said Vanessa Wruble, executive director of March On, the coalition of groups that have organized the Women’s Marches around the nation. “Our country will not stand for elected leadership that blatantly disregards credible accusations of sexual assault against a Supreme Court nominee.”