The 30-foot-high billboard features a model binding a Trump look-alike with red, white and blue rope while stomping on his face. 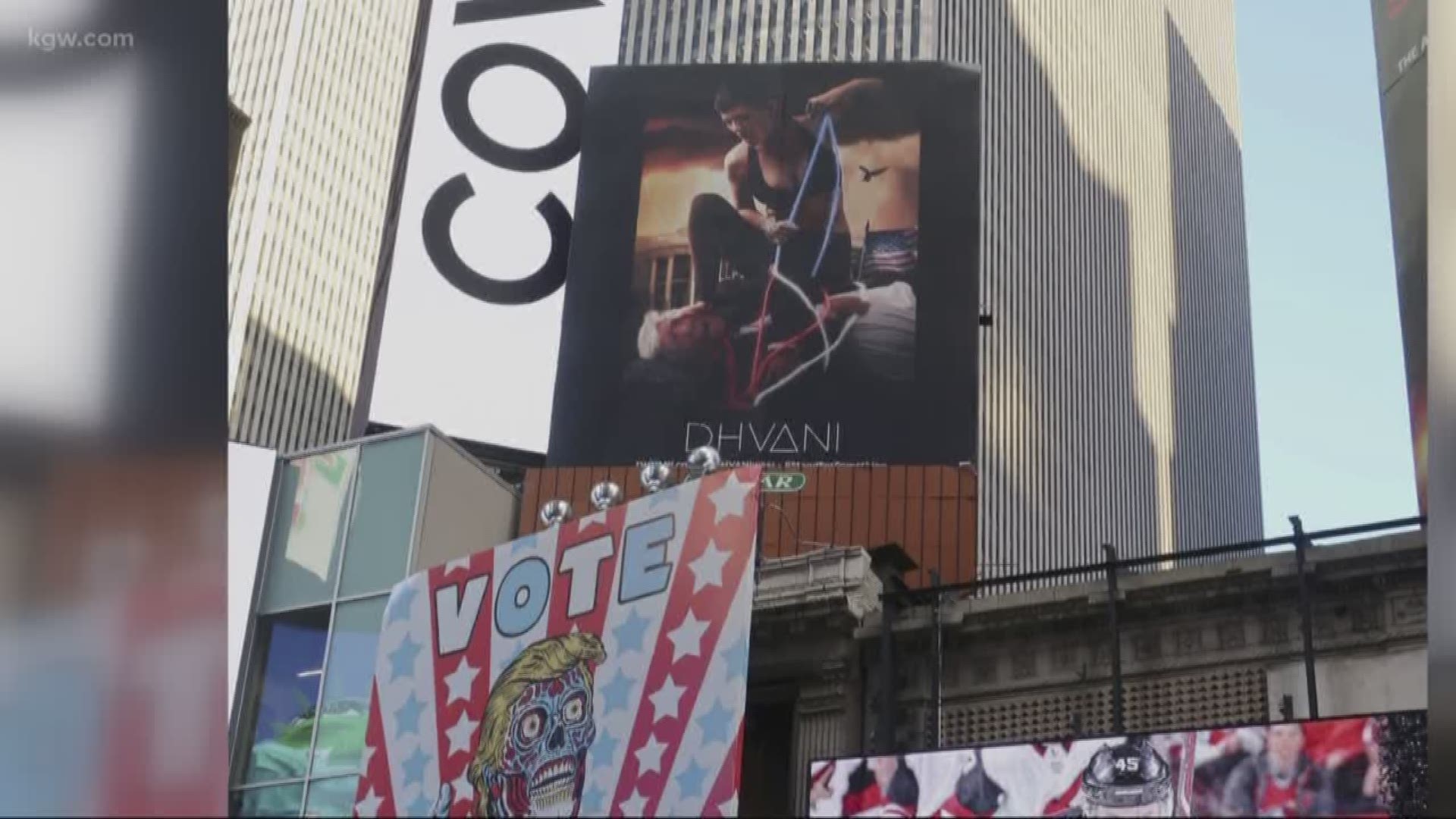 NEW YORK — A clothing company has put up a billboard in New York City's Times Square that depicts President Donald Trump being hog-tied by a woman clad in its athletic wear.

The 30-foot-high billboard featuring a model binding a Trump look-alike with red, white and blue rope while stomping on his face, was put up Tuesday as part of an advertising campaign by Dhvani, a Portland-based clothing company.

Trump's son, Donald Trump Jr, tweaked the media Friday for not writing about the billboard sooner.

"Since you had time to thoroughly cover a stupid and tasteless meme seen by 8 people with incredible outrage, I figured you should dedicate the same time and outrage to this billboard in Times Square you hypocrites," he said in a tweet.

Trump Jr. was referring to news coverage of a parody video, played during a conference at Trump's Miami golf resort, depicting a caricature of Trump murdering members of the news media and other critics.

CEO of Dhvani Avi Brown told The Associated Press the billboard was intended to be a comment on the Trump administration's changes to the Title X family planning program blocking federal funding for health providers who refer patients for abortions.

"We are on the right side of history," Brown said. "The billboard is an expression of our First Amendment right. Its art is a symbol. We would never condone violence. This is about taking our country back."

Other ads in the campaign show models taping over Trump's mouth.

"He unilaterally has created a gag rule that you cannot refer patients with reproductive information about abortion, sex ed, and contraception," Brown said. "He's gagging doctors and nurses, and telling them what they can and cannot tell patients."

According to Dhvani, the model in the billboard, Michal Mesa, is a Marine Corps veteran and middle school teacher.

Due to the ad's violent nature, there was some back and forth between Dhvani and Lamar Advertising, the agency that operates the billboard.

"The client wanted to use a photo of the President but we said no," said Lamar Advertising's digital marketing coordinator, GraceAnn Woolf. The company insisted on a look-alike instead.

Brown said there's been an increase of traffic to the company's website, along with an increase in sales, since the billboard went up.

RELATED: These Oregon residents donated the most in 2019 to Trump's re-election

RELATED: Warren says she made a Facebook ad with false claims to call out Facebook's policies