Of Paradise High School's 980 students, about 900 lost their homes. 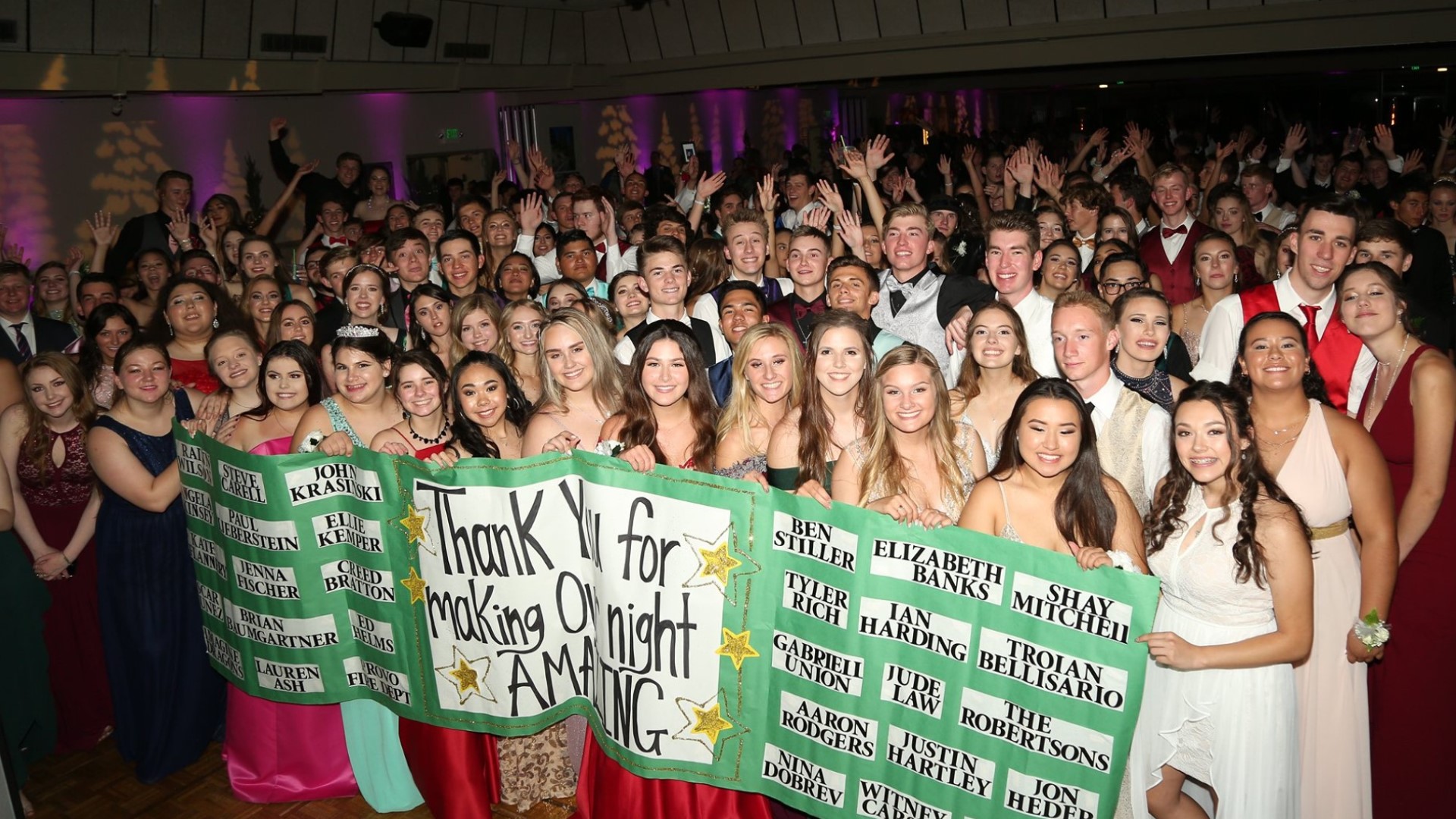 PARADISE, Calif — Sean Newsom's senior year of high school started with typical teenage pranks, like sticking a cup to the roof of his car with magnets just to mess with people as he drove around his small town in the Northern California mountains.

It ended with him living in an apartment with his older brother and two roommates, working at a tanning salon and learning how to be an adult without his parents.

In between, a monstrous wildfire consumed his home and destroyed the town of Paradise, leaving most residents homeless and scattering its close-knit people throughout the region with little time to say goodbye. Newsom's parents moved to the San Francisco Bay Area with his two younger siblings to start a new life.

The school was one of the few buildings in the town to survive the blaze that tore through the town on Nov. 8, killing 85 people, although it could not be used for classes.

Of the school's 980 students, about 900 lost their homes. Some assumed the school would cease to exist, with its diaspora of students settling into new communities. But when a makeshift school opened for the spring semester in a former Facebook building near the Chico airport, more than 700 students returned, including 220 seniors.

1 / 18
AP
Sean Newsom, a senior at Paradise High School, poses in his cap and gown at the burnout ruins of his home in Paradise, Calif., Wednesday, June 5, 2019. After the Camp Fire destroyed the home, his parents relocated to the San Francisco Bay Area, and Newsom moved to an apartment with his older brother in Chico to finish his senior year. Newsom and the rest of the Paradise High School Class of 2019 are graduating Thursday. (AP Photo/Rich Pedroncelli)

They had work to do, work that finishes Thursday when they finally return to their beloved school's football field to graduate.

The first day in the temporary building, the school ran out of food. There was no loudspeaker, no drinking fountains, no bells. No gym or wood shop. The classrooms were cubicles divided by walls so thin that students in a government class struggled to concentrate while an EMS instructor next door loudly explained how to deliver a baby.

But for students from a multigenerational town with deep roots, the school was an anchor. The students needed to see each other.

"Going back to school has really helped my mental health since the fire," said Newsom, who said his parents reluctantly agreed to let him stay behind to finish his senior year.

Credit: AP
Sean Newsom, a senior at Paradise High School, poses in his cap and gown at the burnout ruins of his home in Paradise, Calif., Wednesday, June 5, 2019. After the Camp Fire destroyed the home, his parents relocated to the San Francisco Bay Area, and Newsom moved to an apartment with his older brother in Chico to finish his senior year. Newsom and the rest of the Paradise High School Class of 2019 are graduating Thursday. (AP Photo/Rich Pedroncelli)

Ben Dees was on the football team. After a disappointing season last year, the team went 8-2 his senior year and was preparing for the playoffs when the fire erupted. The team had to forfeit its first-round playoff game.

Dees has had bigger problems to deal with since then.

He has moved four times since the fire, staying with family members and, for a time, the mother of a friend of his mother's friend. He now lives in Corning, a 41-mile drive (66-kilometer) from Paradise. But Dees says he is rarely home. Most days he is with his friends, returning to Corning only to sleep. In July, he will move with his family to St. George, Utah, and attend Dixie State College in the fall.

"I know what I'm going to lose when I leave," he said.

He and his classmates were adamant that they graduate on the football field at Paradise High School like most other classes have done dating back to the 1960s.

"I feel like everybody just wants to get back to the high school. It reminds us of what Paradise was," Dees said.

The fire destroyed nearly 14,000 homes, burning nearly 240 square miles (620 square kilometers). It forced most of the town's 26,000 people to leave, settling throughout the region. To help keep a sense of community, the school organized events for students to go bowling, visit a trampoline park or just get together and play cards.

For their final week in high school, the senior class took a trip to an amusement park and had a picnic at a local park. Wednesday night, Bryan Adams' "Summer of '69" blared from a portable speaker on the Paradise High School football field as students played games and enjoyed ice pops, the sun peeking through what was left of the towering pine trees surrounding the campus. Some set up tents, planning to spend their last night as a high school student at the campus they once knew.

The school's administration has embraced its status as a media magnet. Academy Award-winning director Ron Howard, who is making a documentary about the fire and its aftermath, has sent film crews to the school. After a Los Angeles Times story, a San Diego man donated $1,000 to every student — more than $1 million.

The graduation ceremony itself is possible in part because President Donald Trump autographed a Paradise High School Football hat, which Republican Rep. Doug LaMalfa auctioned for $23,000. He gave the money to the senior class, which used part of it to clear the field of debris and clean up the school.

Prom was free. Yearbooks were free. Caps and gowns are free. The senior trip was free. The Winter Formal was free. All because of donations, mostly facilitated by a teacher, Stacie Martin. The goodwill giving inspired Paradise students, who in March raised about $1,500 for victims of tornados in Alabama.

"We know how it felt losing a lot of things, and having everyone reach out and help us really helped, so we wanted to give back," said 17-year-old Emilee Taylor, co-president of the school and a graduating senior who plans to attend Chico State University in the fall and study to become an elementary school teacher.

"I'd say we have more good days than we have bad days," Taylor said of the students' emotional health. "It helps everyone all going through the same thing, all talking to each other about what's happening."

Of the 220 graduates, about 80% are expected to attend college, according to Principal Loren Lighthall, about the same as in past years. But It's an amazing statistic, he said, given that most college applications were due Nov. 30, about three weeks after the fire when the school was closed and many were displaced. But Lighthall said it's one of many examples of the school defying expectations, including posting the second-highest math scores in the county and graduating a record seven valedictorians — students who took at least eight college-level classes and made A-grades in all of them.

"The senior class is pretty exceptional," said Lighthall, who also lost his home and has been living in a 1,100 square-foot apartment with his wife and five of their seven children.

Eight of the school's 15 athletic teams won championships this year, including two that competed after the fire: boys' basketball and boys' golf. The golf team included senior Cade Weins, who saved his golf clubs from the fire as he was evacuating, along with a hamper full of dirty clothes.

"I figured I wore those the most," he said.

Playing golf became an escape for Weins and an outlet for his team to deal with their changing lives — or at least to not think about it for a few hours. School was initially a sad place for him that felt more like an obligation than a relief. But seeing people every day, people who had walked through the same tragedy, gave him hope.

"Everybody, no matter what grade you are in, just kind of grew up and dealt with whatever responsibility came their way," he said. "It wasn't necessarily the best thing, but it definitely turned out to not be the worst."